Valerie Lettsome recalls overhearing a recent conversation among a group of women chatting about their week. One received enthusiastic support for seeking medical advice to get her diabetes in check; …

END_OF_DOCUMENT_TOKEN_TO_BE_REPLACED 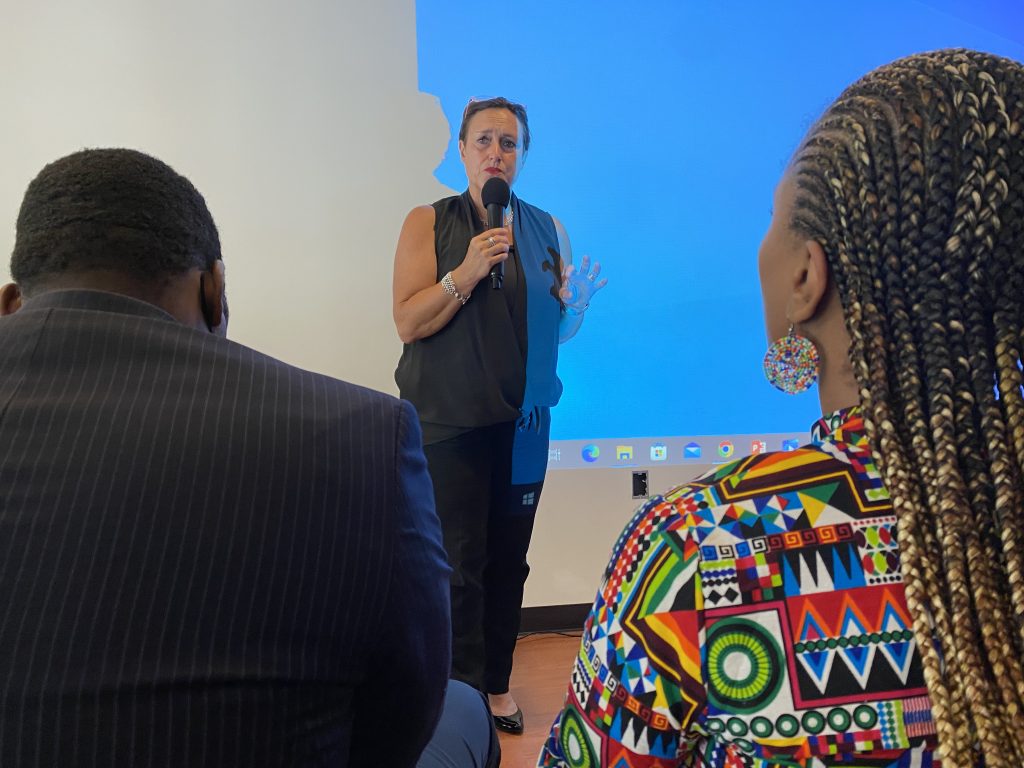 Valerie Lettsome recalls overhearing a recent conversation among a group of women chatting about their week. One received enthusiastic support for seeking medical advice to get her diabetes in check; another was ostracised for discussing her upcoming mental health appointment.

It’s exactly those situations that Community Mental Health Services hopes to address through its new partnership with Public Health England and the London-based charity Mind UK, government officials said during a launching ceremony on July 18 at the Dr. Orlando Smith Hospital.

The CMHS campaign is designed to reduce stigma around mental health, in part by organising two years of interactive social engagements.

During the July 18 launch, CMHS Director Dr. Virginia Rubaine explained how she successfully applied to spearhead the “Time to Change” mental health campaign in the Caribbean.

The campaign, which has been in development for a year, aims to train community-based “champions” to host educational social events, conduct research about perceptions of mental health, and ultimately reduce discrimination. 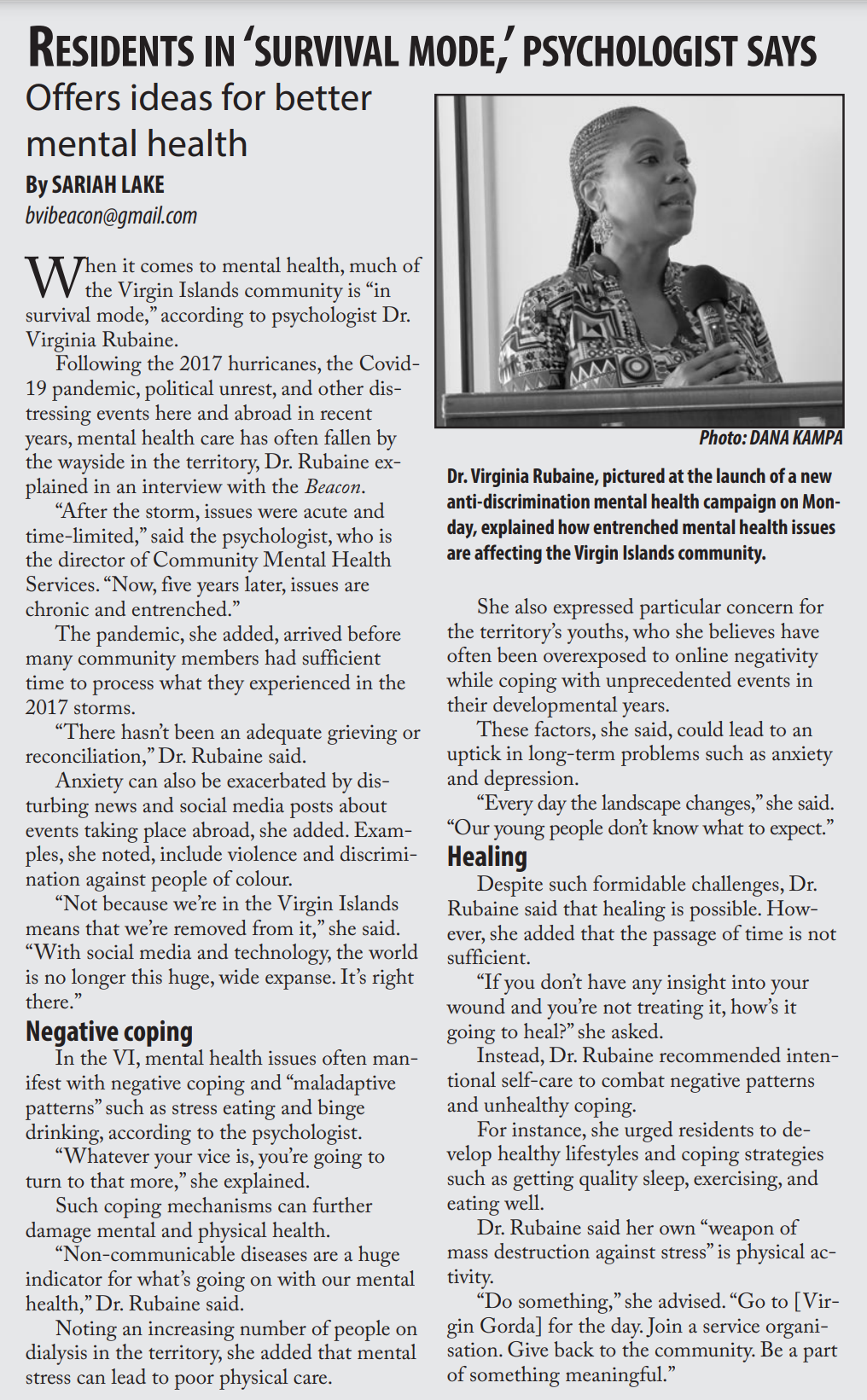 Conversations about mental health have been heading in a positive direction over the years, Dr. Rubaine said, but there is still plenty of room for improvement.

“When I joined the service in 2003, I couldn’t get myself invited to a funeral,” she said. “We have come a long way, and now people are very comfortable with interfacing and engaging with mental health services. As we increase the professionals that work within our organisation, we have seen a number of persons become more comfortable with seeking help.”

In that time, clinical psychologists and psychiatrists have started offering their services through private practices, something Dr. Rubaine said was unheard of when she first entered the service.

The charity originated in the UK, but its efforts have expanded to Uganda, Kenya, Ghana, Nigeria, rural southern India, and now the Caribbean.

“What we want to do with this campaign is improve mental health knowledge, attitudes and behaviours amongst the Virgin Islands community,” Dr. Rubaine said.

Harneys Partner Peter Tarn first drew her attention to the UK-based programme five years ago and offered his support for bringing it to the VI, Dr. Rubaine said. Last year, acting Chief Medical Officer Dr. Ronald Georges also encouraged Dr. Rubaine to reach out to Public Health England for an opportunity to launch the “Time to Change” campaign in the VI and Bermuda, which she landed.

Dr. Rubaine said while health officials have been providing services to the public, this programme focuses on data-driven outreach to make sure educational resources are being used effectively.

In particular, the VI-based “champions” trained by Mind UK hope to reduce the discrimination people face when reaching out for help.

“Why are we comfortable with people being unwell and not treated, but if they seek treatment we ostracise them?” she asked.

She added that an important component of the programme is the training that community “champions” received, giving them tools to tackle stigma and discrimination when hosting social events.

These upcoming events — which are planned on Tortola and the sister islands — include a Family Feud-themed gameshow day, a creative hat competition for World Mental Health Day, and more.

“We realise that the community needs to understand that, like any other illness, people with mental illness can lead a normal, healthy life and have fun while doing it,” Dr. Rubaine said.

On the research side, the team will host focus groups and conduct surveys of people who experience mental health issues to better understand their experiences, and what they think could change.

Conversations about mental health around the globe have been heading in a better direction too, according to Sue Baker, Mind UK international advisor and founding director of Time to Change Global.

During the July 18 launch, Ms. Baker explained how the campaign, which she called one of the most ambitious to end discrimination in mental health, has been pushing for better representation in soap operas, tabloids and other media.

Surveys of education campaigns have shown their effectiveness, Ms. Baker said. For example, she noted that 70 percent of men took action to check in on the well-being of a friend following a campaign in the UK encouraging them to “Be in Your Mate’s Corner.”

Changing the narrative is especially important at this point in history considering a 25 percent increase in mental health problems has arisen out of the psychological impacts of the pandemic, Ms. Baker said.

“Somewhere in the world, every 40 seconds someone takes their life,” she said. “Those people are usually people who haven’t shared their struggles with others. … People have had a very, very tough time, and we need to make sure that they can speak out and can seek support from their peers.”

She added that educational campaigns aren’t necessarily about “ending” discrimination. Rather, organisers aim to significantly reduce how discrimination affects those living with the experience.

Ms. Baker said she’s been extremely impressed with the passion that VI “champions” have shown during the past year of training and development, and she said she is optimistic for the campaign’s success in the VI.

Dr. Rubaine thanked Unite BVI for agreeing to provide 100 percent of the funding needed to move the project forward, and she shared her hope that the government will eventually cover the costs to make the programme a permanent fixture in the community.

Deputy Governor David Archer said an app will soon launch to help people who are looking for support find the right resources for them.