Featured articles > Can the sloops be salvaged?

Can the sloops be salvaged?

Dr. Mitch Kent had been diving off Nanny Cay for about ten minutes when he surfaced and whistled to his colleagues to let them know that Youth Instructor had sunk …

END_OF_DOCUMENT_TOKEN_TO_BE_REPLACED 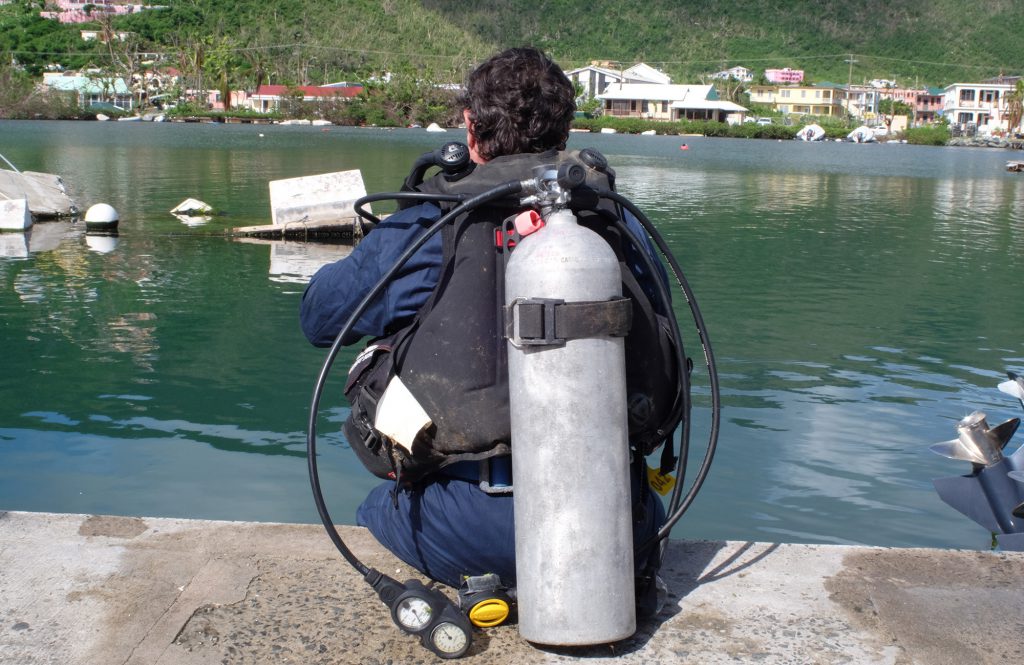 Dr. Mitch Kent had been diving off Nanny Cay for about ten minutes when he surfaced and whistled to his colleagues to let them know that Youth Instructor had sunk in one piece.

“She’s intact! She’s not broken up!” Dr. Kent, author and marine archaeologist at the Virgin Islands Studies Institute, shouted across the water. “For now she just looks as though she went down!”

Amid the overall wreckage of the marina — docks embedded in the seabed, partially submerged boats, a maze of crisscrossed lines and wires — two masts about a 100 feet away from each other stuck out of the water.

On the surface, those were the only signs of Youth Instructor and Intrepid, two traditional Tortola sloops that sank during Irma. Somewhere between them is a third wooden boat, Esmie, but underwater debris makes it difficult to know its exact location.

The three boats make up about half of the territory’s fleet of traditionally made sloops. The others, however, didn’t fare much better in the hurricane.

Two that were “on the hard” in Nanny Cay — Moonbeam and Sea Moon — were severely damaged.

Geoffrey Brooks, curator for the Virgin Islands Maritime Museum, helped build Sea Moon with an Anegada shipbuilder in 2003 and wrote a book about the experience. Now, seeing parts of the sloop splintered apart — and Moonbeam completely “reduced to toothpicks” — is tough.

At least for the three sunken boats, there is hope that they can be salvaged. Divers will likely put inflatable lift bags inside the hulls to raise the ships to the surface, where the water will then be pumped out, Dr. Kent explained.

And if the boats, some more than a century old, are resurrected after a Category Five storm, Dr. Kent said, “It could make them even more notorious.”

Virgin Islands sloops have a long and storied history — starting well before they were raced in area regattas and became a feature in the annual “Sloop Shoot Out” between the premier and the governor.

The vessels, which have been built since the 18th Century, have a particularly distinctive feature: a round fullness in the hull called “moon sheer.”

“If you look at it from the front to the back, it would be almost like you put a full moon in the middle of the boat,” Mr. Brooks said. “It’s this fatness that gives the boats more bearance and makes it more steady for the cargo they used to carry.”

Sloops carried people, goods and information between Caribbean islands, and effectively put Tortola on the map as a shipbuilding centre.

The origin of the sloop’s design, though, remains slightly hazy. Enslaved Africans were among the first to start constructing the boats, leading some historians to believe the model comes from skilled African shipwrights, not European plantation owners.

“Our boats are an original design. And they’ve never been able to ascertain where the design came from,” Mr. Brooks said. “We’ve been doing all this research to try and figure it out, and the thing is they always look toward a European design, and we’ve started to look towards Africa — and I think we’ve pretty much proved it.”

Even after the sloop was phased out in favour of the schooner, which has at least two masts and is therefore easier to control in heavy winds, a cultural emphasis on boat building has remained.

After Irma and the sunken sloops, Dr. Smith believes there is an unexpected window of opportunity to talk about the territory’s history.

The VI Studies Institute has been working to inform more people about the territory’s past — and perhaps highlight well-known stories that were once shared only through word of mouth.

“The new generation, they don’t know. There’s been a kind of a dropping of the ball, or the knowledge hasn’t been passed over as thoroughly,” Dr. Smith said. “We have to keep that in mind, too — visitors, residents, the young generation — it’s a link of information that we’re working on. We recognise the necessity.”

Shortly before Irma, for example, the institute trained taxi drivers about different historical sites, hoping they could then pass on that knowledge to tourists and other customers.

Tours throughout the territory are also given on an ad-hoc basis, and a symposium on Caribbean genealogy and history is planned for next year.

“The Virgin Islands as it is today didn’t just happen: There’s a historical process that led up to exactly the moment we’re in today,” Dr. Smith said. “It’s good for people to be investigators, but at least a little bit of guidance from us can help.”