When you’re away at sea for months, far from friends, family and home, sometimes playing with puppies is just the kind of pick-me-up that you need. This was definitely true …

END_OF_DOCUMENT_TOKEN_TO_BE_REPLACED 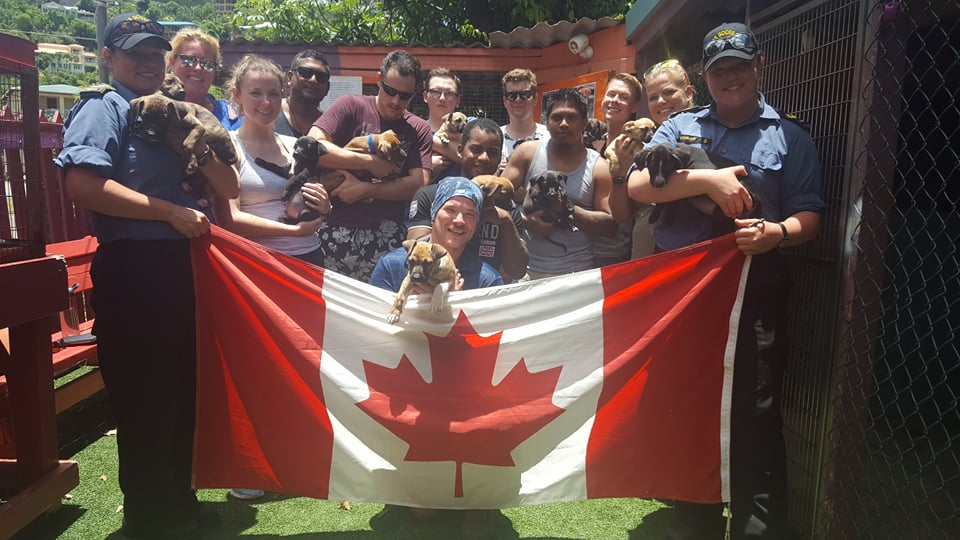 The Goose Bay crew hold puppies and show off their flag on Sunday morning at the Humane Society of the BVI. (Photo: ZARRIN TASNIM AHMED)

When you’re away at sea for months, far from friends, family and home, sometimes playing with puppies is just the kind of pick-me-up that you need.

This was definitely true for the crew of the Goose Bay, a naval ship from Canada.

On Sunday morning, naval officers visited the Humane Society of the BVI and spent time with dozens of puppies and other pets. They met shelter volunteers Kirstie Palmer and Els Kraakman in Cane Garden Bay the previous day, and once the group got to talking, the women invited the crew out to meet the animals.

“It’s nice for these guys to be away from home and have puppy love: They’ve missed it,” Ms. Palmer said.

For Mses. Palmer and Kraakman, the visit was just what the puppies need as well. With a growing number of dogs coming into the shelter and a lack of transportation to get them out of Tortola, the dogs are also lacking attention and play.

“We’ve got 67 dogs at the moment and 48 puppies all needing help, and we’re struggling because we can’t get them out of here since the tourist season is slowing down,” Ms. Kraakman said.

Though the navy members didn’t take any puppies with them, they were still glad to have some time on the islands and with the shelter animals.

“We’re on vacation here. We’ve been at sea for a while and we took a few days for rest and relaxation before we depart again,” said Master Seaman Rebecca O’Connor.

During their stay in the Virgin Islands, the 47-strong crew were able to do some shopping on Tortola and buy gifts for their fellow sailors for a Secret Santa exchange. And of course, they enjoyed the beaches.

“We’re always sailing and warm but we can’t swim, so it was good to get into the water,” said Captain Nicolette Nicholas.

Collectively, over the past five years, Mses. O’Connor and Nicholas have been across Canada and to Europe on missions. They go wherever they are called, including the Caribbean. Ms. O’Connor came to Dominica in 2017 aboard the HMCS St. John’s to offer hurricane relief.

The crew will be out at sea for a couple more weeks before their last port visit in Miami, then it’s back home for them.