In the space of two weeks at the end of 2019 and beginning of 2020, two tourists were killed by boats in unrelated incidents while swimming in the waters of …

END_OF_DOCUMENT_TOKEN_TO_BE_REPLACED 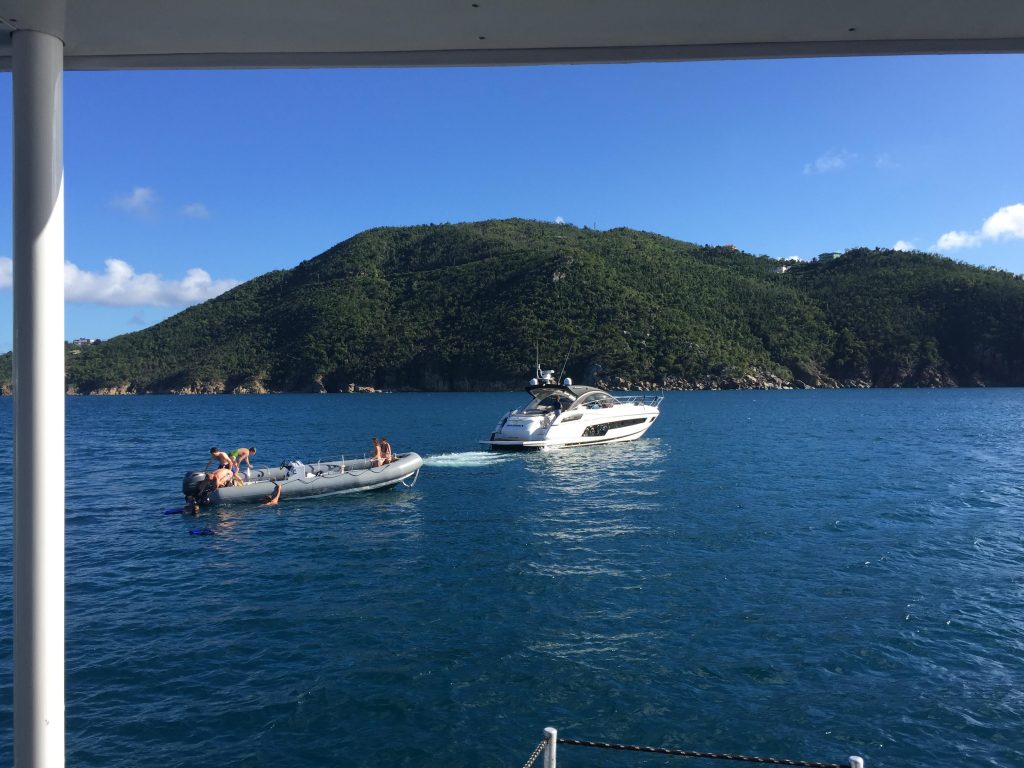 Crew members from the boat Arabella help rescue John LaGrassa and Elizabeth Barry after the boat Sovereign allegedly ran over them on Jan. 3 as they were snorkeling near Guana Island. Mr. LaGrassa later died from his injuries. (Photo: PROVIDED)

In the space of two weeks at the end of 2019 and beginning of 2020, two tourists were killed by boats in unrelated incidents while swimming in the waters of the Virgin Islands.

During his first hearing at Magistrates’ Court on Tuesday morning, Captain Elvis Flowers was charged with failure to report a marine accident within 24 hours.

Crown Counsel Kristain Johnson, who presented the prosecution’s case, read a police report detailing a Dec. 20, 2019 incident where Zdenek “Dennis” Tesar was killed by a vessel while snorkeling at Fischers Cove, Virgin Gorda.

Mr. Tesar was a Canadian citizen who came to the territory aboard the cruise ship Star Legend. His wife, Olga Sebestova, told police that he was swimming in an area close to the hotel along with other guests, Mr. Johnson said.

Mr. Flowers passed over the area in the vessel Aqualon and came to a stop, the police report stated. Crewmembers later said they looked over the side of the boat, deemed that it hit a stingray after seeing blood in the water, and then left the scene, according to the report.

Mr. Flowers has been a captain for Romasco Group for 18 years, he told the court on Monday. He was not represented by a lawyer.

The case was postponed by the magistrate until Monday, allowing Mr. Flowers time to find a lawyer.

Among the attendees at the Tuesday hearing were Jim Hedelston and his wife, who were close friends of another swimmer who died last year in a similar boating incident.

Their friend John LaGrassa was killed by a boat while snorkeling near Guana Island on Jan. 3, 2020, but no charges have been laid in the matter.

Since the death, Mr. Hedleston and his wife have been meeting with VI officials and pushing for more stringent enforcement of marine legislation designed to improve boat safety in the territory.

Mr. Hedleston also has attempted to learn whether the director of public prosecutions planned to press charges on the boat captain who ran over Mr. LaGrassa. After numerous attempts to contact the DPP, he said, he received an email stating that the matter was “taken care of,” with no further details.

During the Tuesday court hearing in connection with Mr. Tesar’s death, Mr. Hedleston noted the similarities between the two situations, but he also notices a major difference in the way the authorities collected information in the cases, he said.

In the Tuesday hearing, he explained, prosecutors were able to present a linear police report and said six witnesses would be able to testify if a trial were to proceed. But the police report of Mr. LaGrassa’s death was not linear, and of about 30 guests who had been travelling with him aboard the vessel Arabella, police opted to take accounts from only a few people, he claimed.

Police Commissioner Michael Matthews told the Beacon that police “undertook a thorough investigation” into Mr. LaGrassa’s death and “submitted the file” to the director of public prosecutions.

“The DPP made an independent decision not to pursue criminal charges and I gather recommended that the family may wish to consider civil action,” he wrote. “We form no part of the decision making for any charges in the matter.”

Attempts to contact DPP Tiffany Scatliffe-Esprit were not immediately successful.