If you can’t ride a bicycle, you might have struggled during the Rotary Club of Tortola’s Fun Car Rally on Saturday.   The annual event, which started at Nanny Cay, …

END_OF_DOCUMENT_TOKEN_TO_BE_REPLACED 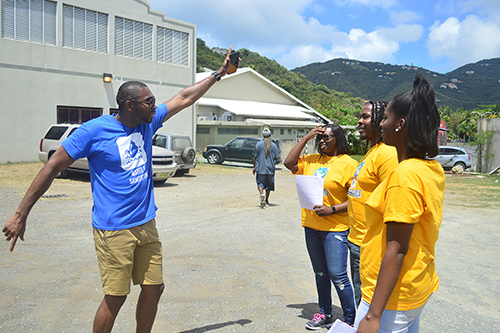 Edson Boyea from the Rotary Club of Tortola instructs participants of the club’s annual Fun Car Rally on a challenge at the A.O. Shirley Recreation Grounds. Photo: NGOVOU GYANG

If you can’t ride a bicycle, you might have struggled during the Rotary Club of Tortola’s Fun Car Rally on Saturday.

The annual event, which started at Nanny Cay, required participants to drive around in groups following clues that led to landmarks across Tortola. This year it also included surprise physical challenges.

After searching for various signs along the road from Captain Mulligan’s to Road Town, participants followed a clue to the A.O. Shirley Recreation Grounds, where they were required to run across the field, enter the facility’s resource centre, and find the names of 12 Virgin Islands Olympians.

Tropical Shipping, one of 15 participating teams, was the first to arrive.

“It’s challenging, but just take your time and work out some of the clues,” said Alexis Dabreo, a member of the group, which would eventually win the competition. “There are so many clues to get, but take your time to observe.”

Already, Mr. Dabreo had learned something new from the contest. “I didn’t know that where Island Roots is located is called the Old Customs House,” said the competitor, who like his teammates was wearing a neon green vest. “I’ll usually just go there for coffee, but this forces you to learn more about the BVI.”

That was one of the objectives of the game, said Edson Boyea, a Rotarian who organised the event.
“We accomplished some of our objectives, which was to promote road safety, promote some history of the BVI, and to send persons to areas where they would not normally go,” Mr. Boyea said.

Though fewer people than usual entered this year — in the past, as many as 35 vehicles took part — organisers dubbed the event a success.

After the participants left the A.O. Shirley Recreation Grounds, they continued with other clues that eventually led them to Balsam Ghut.

There, they met Shirley Creque of Pedego BVI, who gave brief lessons on riding the company’s electric bicycles before sending one member of each team riding through Hawks Nest to the Queen Elizabeth II Bridge.

Some participants were not prepared to face such an obstacle.

“It’s been interesting,” Ms. Creque said. “We tried to give them a little lesson before they left.”
That lesson came in handy for at least one team.

“We didn’t have a clue that some physical activity would be part of the game,” said Delia Jon-Baptiste, a member of a team from the financial services firm TMF Group.

As she talked, her teammate Bianca Nichols fell off her bicycle.

“I know my team pretty well, but it looks like [Ms. Nichols] can’t ride a bicycle,” Ms. Jon-Baptiste joked. “But in the office, she is a good researcher.”

Such events give colleagues an opportunity to get to know each other on a more personal level, according to Ms. Jon-Baptiste.

“It is very challenging, but we’re learning things that we didn’t know about,” she said.

Tamisha Frett was also having fun. Ms. Frett’s team, which was one of several that dressed up,wore adult diapers to raise awareness about orphans.

“It’s been fun so far,” Ms. Frett said. “The track was the challenging part. We had to walk through it and then write down names, but it was a lot of walking.”