The Virgin Gorda Car Show was held on Saturday at the Little Dix field in Spanish Town.   Close to 20 entries competed in the show, which showcased customised vehicles …

END_OF_DOCUMENT_TOKEN_TO_BE_REPLACED 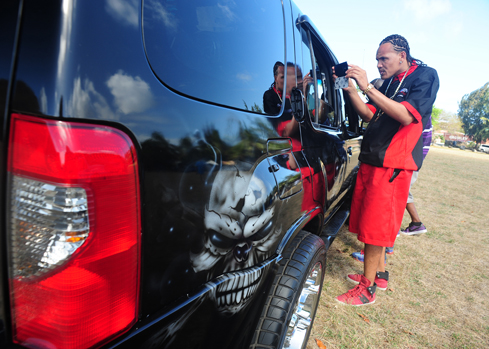 The Virgin Gorda Car Show was held on Saturday at the Little Dix field in Spanish Town.

Close to 20 entries competed in the show, which showcased customised vehicles with elaborate sound systems and scooters.

Mark Feason, of St. Martin, took photos of the car show entries with his phone as he walked around the grounds inspecting the vehicles. He was invited to the VG event as a certified International Car Show Association judge. In the past, he has organised and competed in various car shows.

“This is their first car show and they are just starting off,” Mr. Feason said. “The organisers are trying their best, but it isn’t up to the standard we do back home. But I am sure they will get there.”

Although he travels around the region judging car shows, it was his first time in the Virgin Islands.

“I am really away from participating in the shows now,” Mr. Feason said, who owns a Hummer H3 with 24-inch rims. “I am really just into judging.”

He said he would be focusing mainly on the sound systems at the VG show.

“I will be looking at the bass; the clarity; the installation quality and the loudness. There are a lot of aspects to the sound.” Mr. Feason said. “That is really, truly what this show is about.”

The vehicles in the show were parked in a half circle with a small generator in the middle that had several extension cords powering the vehicles on the perimeter.  The participants were trying to conserve their vehicle’s energy so that their sound systems would perform properly when it was time to be judged.

Some of the participants like Lawrence Anderson Fonseca was competing for looks and not sound.

He brought his white 2010 Camaro SS donned with orange flames from Tortola. His personalised license plate read: SINBAD — a name he goes by.

He was happy to travel to the sister island for the show.

“I want to help promote it,” Mr. Fonseca said, who paints cars. “I have several friends over here. I would love to see more car shows.”

Another painter at the show was D’dron Griffin, 20, of North Sound. He was airbrushing T-shirts under a tent at the event. He also airbrushed a vehicle in the show that won first place in the Airbrush Category. The self-taught artist gets a lot of requests to paint skulls — both on T-shirts and cars.

“This is just a hobby,” Mr. Griffin said, who is a boat captain.

All told, he has airbrushed two vehicles, but is looking to do more.

“What we didn’t expect was the amount of cars from Tortola,” Mr. Forbes said. “There were some cars we didn’t have categories for. But next year we will.”

The club was formed in November and with its seven members started planning the car show immediately. In October, organisers hope to host a “different” kind of audio competition for “anything on wheels.”

The club is powered by Young Generation Productions.