Caribbean Development Bank President Dr. William Warren Smith called for private-sector-led “digital transformation” to achieve a sustainable future in the region as it faces external threats from globalisation and natural …

END_OF_DOCUMENT_TOKEN_TO_BE_REPLACED 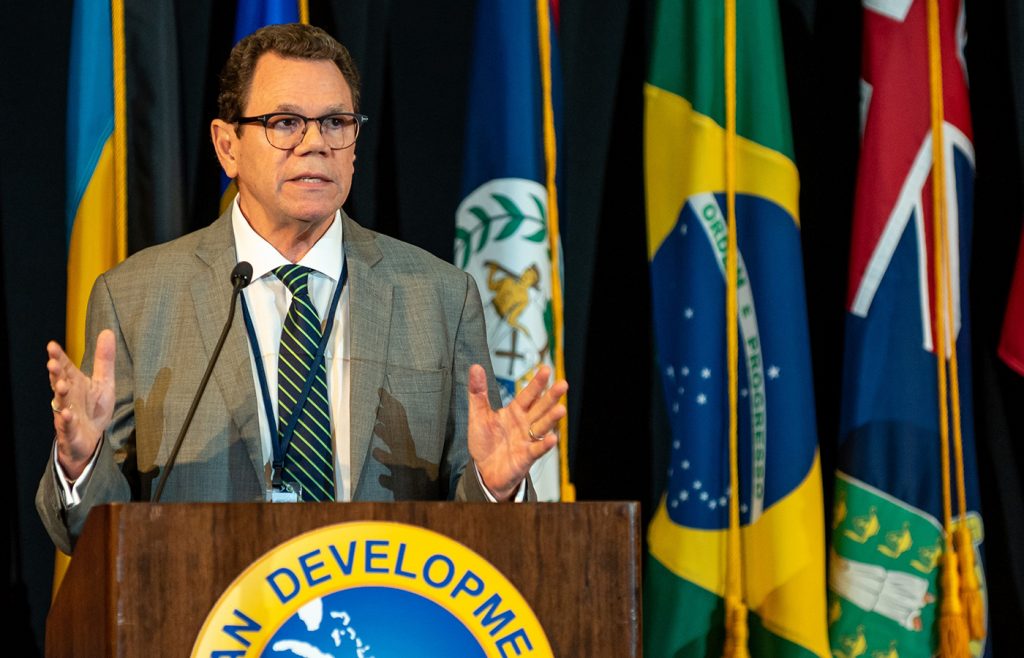 “We are moving too slowly in doing those things, which will ensure that, by the year 2030, our Region will have delivered on our promise to eliminate poverty and to reduce inequality,” said CDB President Wm. Warren Smith. (Photo: Caribbean Development Bank)

Caribbean Development Bank President Dr. William Warren Smith called for private-sector-led “digital transformation” to achieve a sustainable future in the region as it faces external threats from globalisation and natural hazards that he said are leading to growing inequality even in developed countries.

Speaking last week at the closing ceremony of the 49th annual meeting of the bank’s board of governors in Port of Spain, Trinidad, Dr. Smith said, “Digital transformation is indispensable. It will change the way we live, consume and produce. Harnessing digital power is equivalent to securing our future.”

He also detailed how the private sector — particularly micro, small and medium-sized enterprises — has to be “crowded into the development narrative in a way that is sustainable.”

The president added that development institutions like the CDB — of which the Virgin Islands is a borrowing member territory — could provide the right incentives for the private sector to mature and flourish.

The bank, he said by way of example, plans to increase funding and make more resources available to help fight climate change.

“Green growth that is inclusive is not an option but a necessity,” Dr. Smith said.

“Responding to climate change presents immense challenges and opportunities for development, making it essential that climate and development issues be tackled in an integrated way.”

Also during last week’s conference, the CDB presented a study that gauges the vulnerabilities of 17 borrowing member countries and territories and gives recommendations for improving their resilience — although it excluded the VI, it said, because of a lack of data.

The paper, titled “Measuring Vulnerability: A Multidimensional Vulnerability Index for the Caribbean,” found that members on average are middle to highly vulnerable in terms of economic, social and environ- mental causes of vulnerability.

“The vulnerabilities of [members] are concentrated in the areas of dependence on strategic imports, export concentration and exposure to natural hazards and climate change,” CDB economist J. Jason Cotton said in a press release.

According to the report, “The Virgin Islands does not compile trade data and, therefore, no data was available for the Export Destination and Export Concentration subindices.”

The Turks and Caicos Islands was excluded for a similar reason. Data gaps in some Caribbean states were overcome by “extrapolating trends from historic data, and in others by leveraging existing data from similar countries to create estimates,” the report read.

Haiti ranked highest on the vulnerability index, with a score more than double the lowest ranking country, Trinidad and Tobago. Anguilla, the Cayman Islands and Montserrat — all British overseas territories like the VI — were ranked at nine, 14 and 16, respectively, with Anguilla being the most vulnerable of the three.

Even middle-income countries are vulnerable due to their small size, their economic and social structures, and their susceptibility to natural disasters, the study found.

“There is the need for a regional approach to addressing vulnerability and, in particular, to closing the financing gap caused by natural disasters that are becoming more frequent and more intense due to climate change,” the press release stated.