When the doors of the Virgin Islands reopen to tourism, the territory’s leaders say, they intend to be ready. Some competing countries and territories in the region have announced plans …

END_OF_DOCUMENT_TOKEN_TO_BE_REPLACED 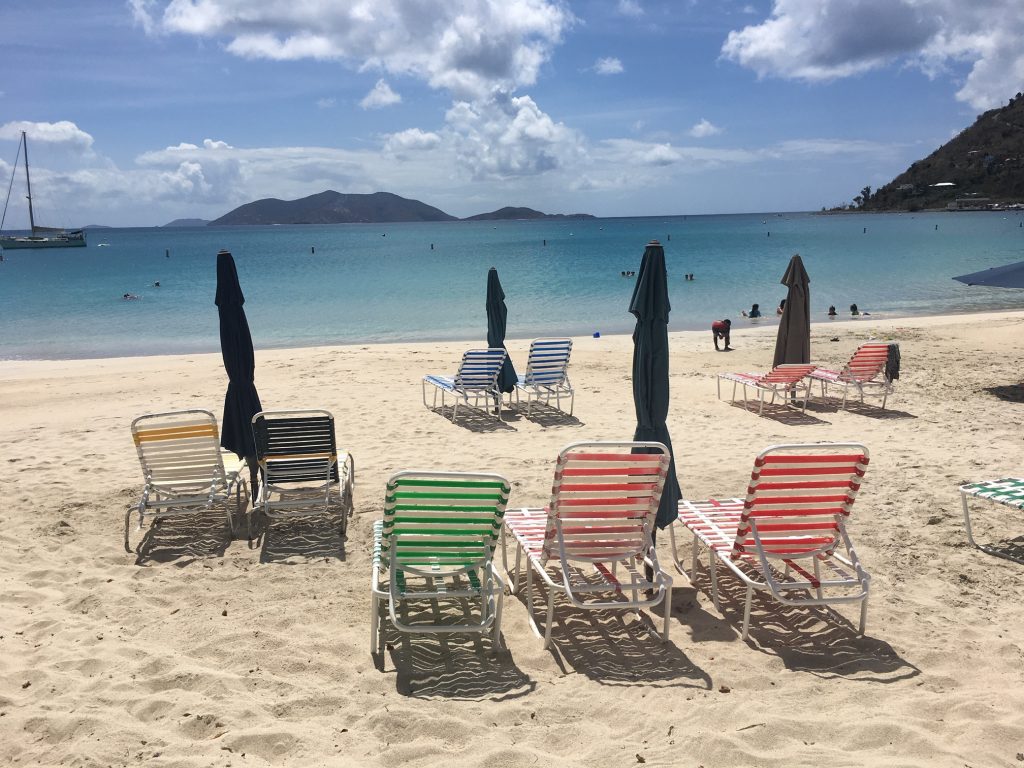 Some countries in the Caribbean plan to open to visitors in June, but the Virgin Islands has not yet announced a firm date. Though Cane Garden Bay (above, on Tuesday afternoon) has been increasingly busy with residents on weekends, it is often quiet on weekdays.(Photo: CLAIRE SHEFCHIK)

When the doors of the Virgin Islands reopen to tourism, the territory’s leaders say, they intend to be ready.

Some competing countries and territories in the region have announced plans to welcome visitors as early as next week, but the VI and many others have not said when they plan to open.

Here, officials said, a lot needs to happen behind the scenes first.

“We don’t have an opening [for tourists] in mind yet,” then BVI Tourist Board Director Sharon Flax-Brutus said during a May 20 webinar sponsored by the Caribbean Tourism Organisation.

The session featured six tourism leaders from different Caribbean countries speaking both on preparations for the upcoming hurricane season and on how lessons learned from previous disasters could be applied to the current Covid-19 crisis.

So far, St. Lucia, Antigua and Barbuda, Aruba, Grenada and the US Virgin Islands have all said they plan to open to visitors at some point in June. Ms. Flax-Brutus — who announced her resignation last week and no longer heads the BVITB — said that when the doors of this territory are at first opened to nationals on June 2, “We will pilot an approach … and get the feedback to make sure that the protocols that are put in place are workable, and that [the protocols] work with what the Ministry of Health needs.”

During what she called the “downtime” expected over the next few months, progress is the goal, she explained.

“We’re looking at destination training in terms of what that new guest experience is going to look like, what those new touch points are,” she said.
“We have a custom of hugging and kissing and getting close.”

That experience needs to be rethought, she said, adding that after new protocols are tested out on returning residents, “Hopefully, it works the way
that we envisioned for us, and they will come and visit us back in droves.”

Valerie Damaseau, president of the Tourism Office of St. Martin, called the crisis “unknown circumstances for everyone.”

“At least with the hurricane[s], it was something that we saw,” she said. “We saw the damages; we were able to putour hands on it. Now this pandemic, we can’t see it.”

“[They ask], ‘Should I take the risk?’ So we’re focusing on this local travel, local occasional travel,” she said.

According to May Ling Chun, tourism director of neighbouring Dutch St. Maarten, the pandemic is a moving target.

“Just every day you’re bombarded with new information or focus groups. … Basically, we’re finalising all the protocols of all the stakeholders, from airports to tour operators to hotels and restaurants. Right now it’s a matter of deciding as a country when we’re going to open; it will be in phases.”

Ms. Damaseau added that St. Martin is looking at “July and August” to focus on marketing local and regional travel before opening up generally. Until recently, she said, there were still “a lot of uncertainties, but in the summer we’re making sure that the airports are ready.”

“There’s a lot of measures that are being put in place,” she said, adding, “At least that stage is set to be ready in case we are ready to receive guests as of tomorrow.”

Dominica, meanwhile, has established a public-privatesector task force “looking at putting a 30-60-90-day plan of how we will reopen,” according to Colin Piper, CEO of the Discover Dominica Authority.

“We are the ‘nature island’ of the Caribbean, and so a lot of country experiences are outdoors,” he said. “So [the country is] readily made for a kind of remedy and antidote to Covid. But still we have to put it on paper and let people know.”

The Bahamas has also been working on a plan “in all lanes, so when the trigger [is] pulled we can reopen,” said Joy Jibrilu, director-general of
tourism in The Bahamas, whose prime minister has announced a tentative opening date for visitors of July 1.

However, Ms. Jibrilu stressed that training is key.

“You know, you expect the hotels to know what to do, but who’s speaking to your stakeholders, your frontline workers, your taxi drivers, your vendors?” she said. “Training up what this protocol actually means and how it will be implemented. And so we’re utilising this time until we’re ready to reopen to
put those measures in place.”