“So many of us come from water,” someone read. Even though the poet who wrote those words is from Samoa, she may as well have been talking about the nine …

END_OF_DOCUMENT_TOKEN_TO_BE_REPLACED 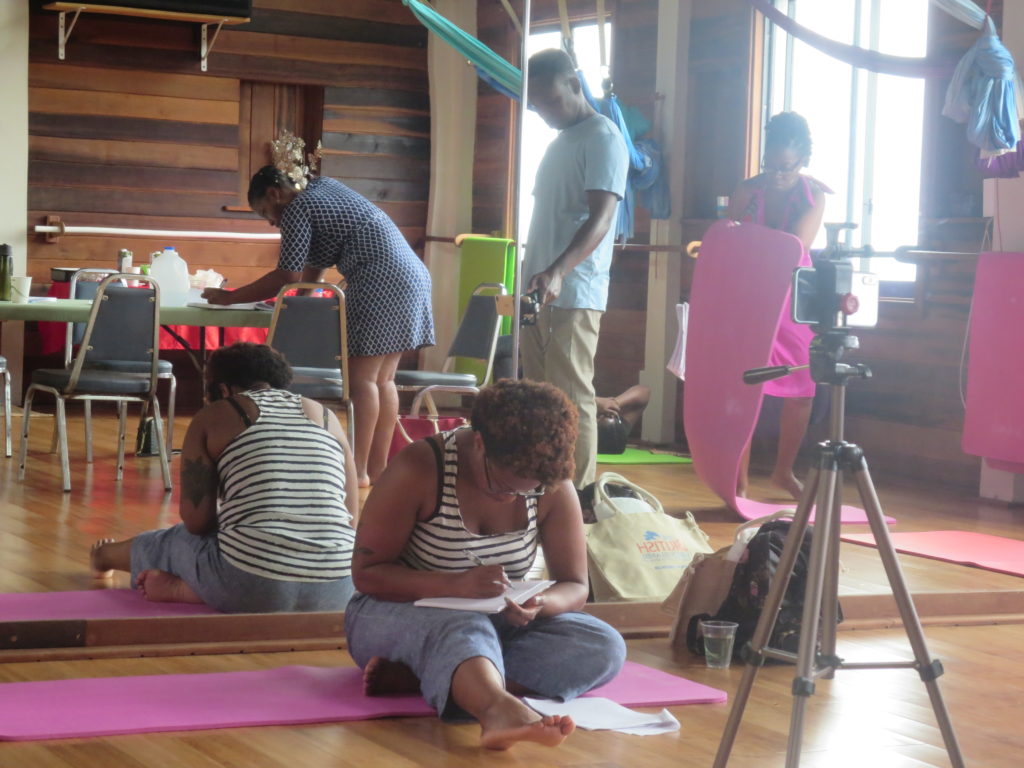 Photo: CLAIRE SHEFCHIK United States-based poet Erika Jeffers, whose parents are from Montserrat and Nevis, bends over her work during a writing session on Friday at Frangipani studios during day four of the Moko Writers Workshop.

“So many of us come from water,” someone read.

Even though the poet who wrote those words is from Samoa, she may as well have been talking about the nine poets gathered around the table at Frangipani Studies in Chalwell Estate, who had flown in from seven countries around the Caribbean to work with the Moko Writers’ Workshop facilitator, Jamaican-British poet Raymond Antrobus, who, with Moko Magazine founding editors Dr. Richard Georges and David Knight Jr., organised the event.

It was Friday, day four, and all week the poets had discovered and discussed new voices and new poems, reading everything from the classics of Ralph Waldo Emerson to United States National Book Award-winner Terrance Hayes. They also practised writing different forms of poetry; discussed how to mine the history of their islands; and enjoyed the chance to dissect literature in the Caribbean.

“We’ve been talking about Caribbean literature: … how each of our individual landscapes are in a kind of conversation,” Mr. Antrobus explained.

Now one poem seemed to be tying it all together.

They took turns reading the rest of the Samoan poem “Atlas” by Terisa Siagatonu: “How everyone is beginning/to hear more about your island/but only in the context of/vacations and honeymoons.”

April Glasgow, a Virgin Islands participant, said of the poem, “That is everything the BVI is.”

Arturo Desimone spoke similarly. “Most people only know Aruba from the Beach Boys song,” he said of his home country, referring to the song “Kokomo,” which mentions several Caribbean vacation destinations.

“How you mourn the loss of a home/that isn’t even gone yet,” someone else read.

“It captures the violence of being colonised,” said Erika Jeffers, a US-based poet who is of Montserratian and Nevisian origin.

Mr. Antrobus suggested the poets take 20 minutes to disperse from the table and think about constructing a response. Attendees sprawled out on yoga mats or went out to wander in the garden, and then returned to share their writings with the group.

When they came back, Ana Portnoy Brimmer of Puerto Rico said she was inspired to explore how the US responded to her territory after it was devastated by Hurricane Maria.

“We are a landscape on a leash,” she read aloud.

Her poem went on to express the inadequate response she felt the US had offered after the hurricane, denigrating the “parachutes of thoughts and prayers” she said the country sent.

Many of the poets said the workshop offered an invaluable opportunity to meet and discuss the difficulties and joys of writing poetry in the Caribbean.

“I think they’re fostering inter-island trans-island community, and I came here to be a part of that growing community and contribute to the conversation,” Ms. Brimmer said.

Mr. Desimone added, “In a way it’s not just a writers workshop: It’s an interaction with different nations and is interesting and fruitful for that.”

He explained that the Caribbean “is extremely cosmopolitan” in nature, but that fact often goes unrecognised because its inhabitants are separated not only by water, but also by bureaucracy and language, which are handicaps that stretch back to colonial times.

“There are many different kinds of barriers that prevent this region from becoming … less provincial,” he said. “We can live that through interactions across islands and the sea.”

Ms. Brimmer added that Caribbean writers “are constantly talked about and conceptualised from the outside, and I think it’s a really important and urgent initiative that [the organisers] created this space for us to do that for our- selves.”

Ms. Glasgow said that colonisation is a pervasive theme in Caribbean poetry “because we live it every day.”

“At work, at school, at the hair salon,” she explained. “It’s a constant in our lives.”

‘A lot to contribute’

Jannine Horsford, of Trinidad and Tobago, said that overall, the workshop had been an “awesome experience” that was the most useful of the three or four other workshops she has attended.

Ms. Glasgow added that although she frequently writes, she hadn’t thought to apply for the workshop — at least until Dr. Georges convinced her to.

“He thinks I can write,” she said. “Right before the deadline, he said, ‘Apply, apply apply.’ I’m very happy I did.”

Caribbean poets need all the encouragement they can get, attendees agreed. Even today, schools in some countries don’t adequately teach their national literature, or only teach it by rote memorisation, as is sometimes the case in Trinidad, according to Ms. Horsford.

Lack of funding for literacy also remains an issue.

“The impoverished national libraries on Caribbean islands is a real situation because of the vestiges that remain of the colonial era,” Mr. Desimone said. “In Aruba, you can only check out books during exam periods and then you have to bring them back.”

That said, the attendees expressed gratitude toward the corporate and other sponsors that made the workshop possible. Ms. Horsford said she would not have been able to attend if the conference had not paid for her airfare, lodging and meals.

“They took really good care of us,” she said. “It takes away a lot of the stress of being a young poet, and as poets we have a lot to contribute.”