Monkeypox hasn’t yet been reported in the Caribbean, but with cases spreading to countries where it is typically not found, including the United States, regional health officials are taking precautions. …

END_OF_DOCUMENT_TOKEN_TO_BE_REPLACED 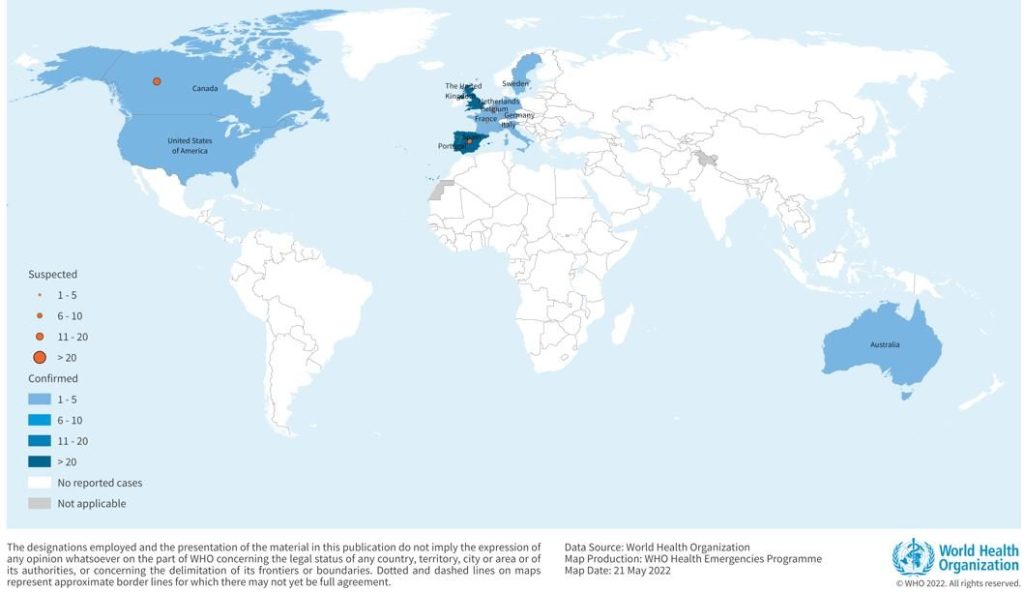 The World Health Organization reported 92 confirmed cases and 28 suspected cases of monkeypox in countries where the virus is not endemic as of May 21. Though no cases have been confirmed in the Caribbean, monkeypox has been reported in England, Australia, Belgium, Canada, France, Germany, Italy, the Netherlands, Portugal, Spain, Sweden, and the United States, according to Health and Social Development Minister Marlon Penn. (Graphic: PROVIDED)

Monkeypox hasn’t yet been reported in the Caribbean, but with cases spreading to countries where it is typically not found, including the United States, regional health officials are taking precautions.

Health and Social Development Minister Marlon Penn said last Thursday in the House of Assembly that his ministry has been monitoring the spread of the virus abroad.

“Monkeypox is not a new virus, with the first case having been identified in 1970,” Mr. Penn noted. “It has been found regularly in several central and west African countries. This particular outbreak has gained international attention because cases have been confirmed in several different countries at the same time and in persons with no reported travel history to countries where the virus is usually found.”

The World Health Organization reported 92 confirmed cases and 28 suspected cases in 12 member states where the virus is not endemic as of May 21. The United Kingdom Health Security Agency announced the first case in the outbreak in the UK on May 7, and Mr. Penn said the initial patient is thought to have contracted it during recent travel to Nigeria.

He added that the WHO recognises “that further spread is likely, and countries should take precautions.”

Though no cases have been confirmed in the Caribbean, they have been reported in England, Australia, Belgium, Canada, France, Germany, Italy, Netherlands, Portugal, Spain, Sweden and the US, Mr. Penn said.

“There is risk of spread to the Caribbean region due to travel,” he said. “Therefore, awareness is being raised among health care workers and port health authorities across the region to ensure that adequate prevention and control measures are in place.”

Symptoms can last two to four weeks and include exhaustion, fever, headaches, backache, muscle ache, chills and swollen lymph glands. Within the first three days of fever, rashes can develop on the face, hands, feet and other parts of the body.

“Testing for monkeypox is currently not available in the Caribbean, and the Caribbean Public Health Agency is reportedly in discussion with the [Pan American Health Organisation] and the US Centres for Disease Control and Prevention to assess its capacity to develop this testing capability,” Mr. Penn said.

He added that the Ministry of Health and Social Development will coordinate with health care workers and agencies working on port health and animal quarantine moving forward.

“Many of the specific recommended actions from CARPHA are in place in the BVI, and strengthened in response to Covid-19,” he said. “Although the likelihood of monkeypox spread in our community is currently low, the chief medical officer and other officials will continue to monitor the situation and ensure that the territory is prepared to detect and respond to any cases as needed, and will keep the community informed of any change in the situation.”

Mr. Penn said initial information about the outbreak has identified the virus within sexual networks, but he noted it is not considered to be a sexually transmitted disease.

The WHO says on its website that the virus is transmitted through close contact with an infected person or animal, typically through lesions, body fluids, respiratory droplets and contaminated material such as bedding.

Vaccines against smallpox have provided some protection against monkeypox, and a newer vaccine has been specifically approved for prevention, according to WHO.

Though severe cases can occur, especially among children, WHO stated that the case fatality ratio has been about three to six percent.