Following a virtual meeting attended recently by Deputy Premier Dr. Natalio “Sowande” Wheatley, leaders from the Caribbean Community expressed “dismay” with the way the United Kingdom went about launching its …

END_OF_DOCUMENT_TOKEN_TO_BE_REPLACED 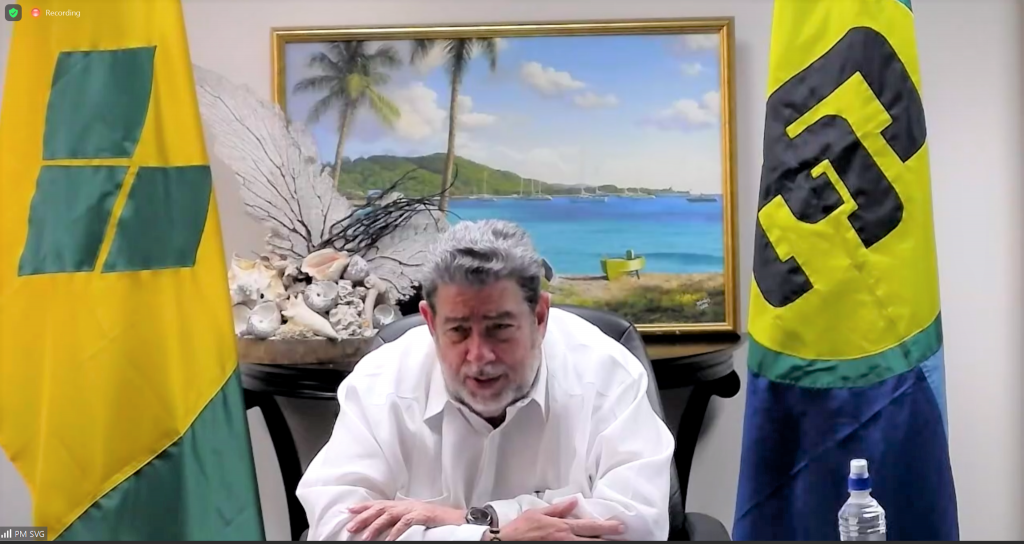 The Caribbean Community heard complaints about the ongoing commission of inquiry from the Virgin Islands government during a virtual meeting Feb. 24-25 attended by Deputy Premier Dr. Natalio “Sowande” Wheatley in place of the premier. Above is outgoing Caricom Chairman Dr. Ralph Gonsalves. (Photo: PROVIDED)

Following a virtual meeting attended recently by Deputy Premier Dr. Natalio “Sowande” Wheatley, leaders from the Caribbean Community expressed “dismay” with the way the United Kingdom went about launching its investigation into corruption in the Virgin Islands.

Dr. Wheatley represented the territory in place of Premier Andrew Fahie during the online 32nd intersessional meeting of the conference of the Caricom heads of government on Feb. 24-25.

Besides the VI inquiry, he and other leaders discussed the ongoing impact of the pandemic on health and economic growth in the Caribbean, measures to drive economic recovery, and reparations, according to a Feb. 26 press release.

“We will remain engaged on Covid-19 and other important issues to us and our neighbours,” Dr. Wheatley said. “It is important that we all continue working together closely if the Caribbean is to successfully recover and emerge from the global pandemic.”

After the meeting, Caricom issued a statement saying that heads of member governments had received a letter from Mr. Fahie about the inquiry.

“Heads of government noted the strongly expressed concerns on this matter by the British Virgin Islands government, which concerns are also shared by other associate members of [Caricom],” the statement added.

Mr. Fahie noted his appreciation for Caricom’s support in a Feb. 26 press release.

“Caricom’s interest in the commission of inquiry is positive, especially their understanding of how damaging the approach taken to the COI’s announcement was for the image and economy of the territory that is based on tourism and financial services,” he stated. “Local businesses and the welfare of families and individuals were placed at risk by the decision to not provide notice of the planned announcement beforehand.”

Caricom did not state that it planned to take any specific action in response.

The inquiry, first announced Jan. 18 by then-Governor Gus Jaspert, is looking into allegations of political intimidation, misuse of public funds, and possible organised crime, among other misconduct.

Though the probe has been criticised by detractors including the VI government, it also has drawn vocal support from other community members who say it is needed in order to identify possible corruption in the territory and rectify governance failings that have existed for decades.

Commissioner Sir Gary Hickinbottom is charged with providing a report within nine months.

Commission Secretary Steven Chandler reported on Feb. 26 in a press release that the investigation was entering its second stage.

“This involves obtaining further information and documentation predominantly from public officials, including elected and statutory officials,” the press release explained. “The commissioner has the powers of a High Court judge to require production of information and documents by way of summons. However, given that the BVI government has indicated that it will fully and promptly cooperate with any requests for information/documents, the commissioner is initially making requests for voluntary disclosure.”

The commission plans to continue making such requests in the coming weeks, the press release noted.

Residents can learn more about contacting the commission at www.bvi.public-inquiry.uk.