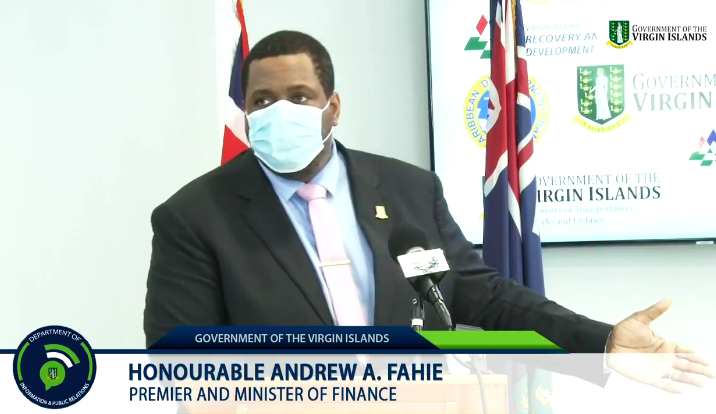 Premier Andrew Fahie stressed the importance of boosting the local economy through construction projects at the signing of another RDA contract this afternoon. (Photo: PROVIDED)

Infrastructure on Tortola took the spotlight this afternoon as contracts worth $2.5 million to repair the Carrot Bay and Zion Hill water systems were signed at the Recovery and Development Agency.

“Can I tell you that water woes have existed for a while in the First District where people have been constantly complaining about access to the water supply?” Premier Andrew Fahie said during the signing ceremony.

Autland Heavy Equipment Co. Ltd. was one of two companies that submitted a bid for the project by the deadline date, RDA Procurement Director John Primo said during the ceremony.

The bids were scrutinised, and Autland was recommended as the lowest responsive bidder, he added.

The recommendation was then approved by the Caribbean Development Bank, which provided the loan that is funding the $2.5 million project.

“This is more like a feel-good project. … This one, when you know you’re affecting a district or area, it makes you feel a little different about the project,” said Dion Crabbe Jr., representing Autland.

According to Transportation, Works and Utilities Minister Kye Rymer, the works will be conducted in stages, including the installation of a 322,000-gallon tank and a 323,000-gallon tank, retaining walls to protect the reservoirs, gate valves, and bulk metering gauges.

Mr. Fahie thanked Mr. Rymer for pushing for infrastructural projects, “especially to get water to everyone in the territory.”

The premier also stressed the importance of starting recovery-and-development projects leading up to the June 1 start of a hurricane season he said is predicted to be active.

“One of the main ways we’re going to rebuild our economy is through construction,” Mr. Fahie said. “We’re asking our contractors to step up to the plate. We’re making sure the seminars needed are offered — and often free of charge. You just need to have the will to attend.”

The RDA intends to hold training sessions in Virgin Gorda next week “to build the capacity of contractors there,” said Mr. Primo, who added that trainings will also be held on Tortola.

The sessions are capped at 15 people at a time to maintain safe social distancing practices, but the agency may host multiple sessions to accommodate interested individuals and companies.

Also during the ceremony, the premier said that some people have accused him of “handing out contracts.”

In response to the accusations, Mr. Fahie said a Facebook live event will be held next week to “defend [his] actions.” He encouraged the public to call in and ask questions. A date will be announced later, he said.