Catamaran is upside-down no longer

The iconic upside-down catamaran at the entrance to Nanny Cay is no longer as iconic, but a lot more comfortable. A dramatic Friday operation accomplished with the help of two …

END_OF_DOCUMENT_TOKEN_TO_BE_REPLACED 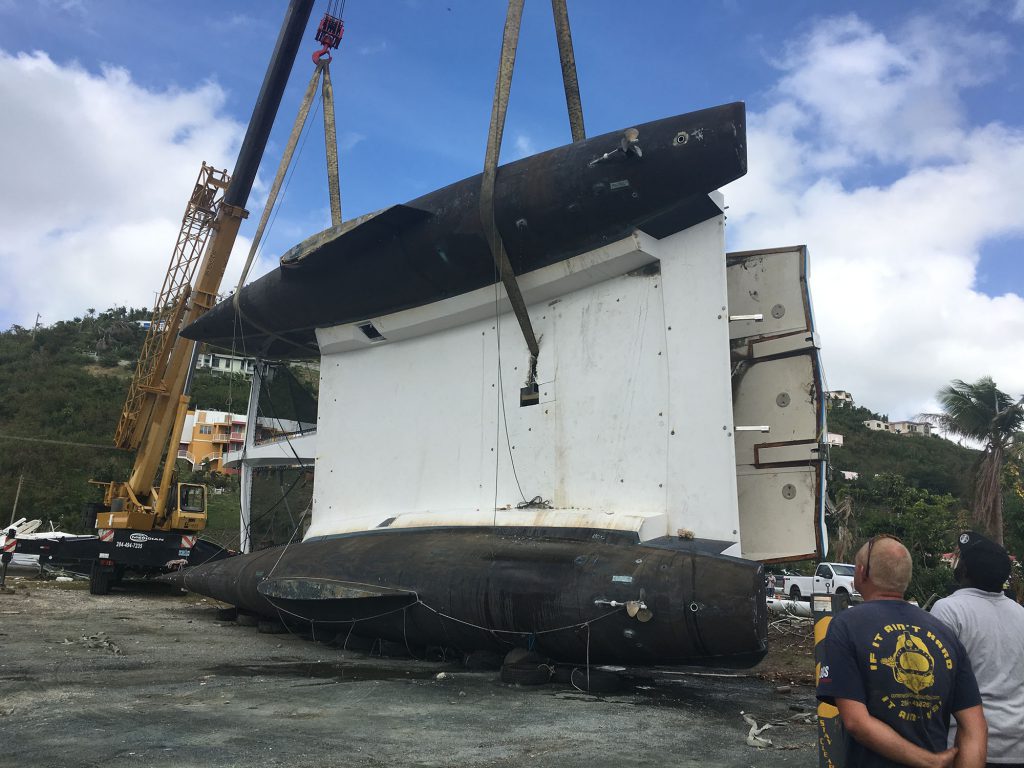 The iconic upside-down catamaran at the entrance to Nanny Cay is no longer as iconic, but a lot more comfortable.

A dramatic Friday operation accomplished with the help of two cranes and a backhoe, Commercial Dive Services, Meridian Construction, B&C Construction and Bozo Trucking, flipped over the 62-foot, 20-ton charter vessel Catsy, which had been lying upside down on top of a shed near the marina’s entrance since the passage of Hurricane Irma.

“It went flawlessly,” said Chris Juredin of CDS. “There were no problems; the owner is very happy as well as the boatyard.”

“It was a high profile flip,” he said. “Everyone was there; people were videotaping. Just from that perspective, you wanted it to go well.”

Catsy was written off by its insurance company and sold, reportedly for a fraction of the original cost, which was estimated to be just under $1 million, according to a Facebook update from Marco Ottiker, the vessel’s former owner.

That was followed by discussions among salvage firms about who would accept the task of flipping her over.

During an interview in November, Andrew Ball, of Caribbean Marine Surveyors, had speculated that it might be wiser to demolish the boat rather than mounting a costly and potentially dangerous operation.

“It was clear that there was no guarantee of success — merely a best-chance decision to be made,” Mr. Ball said Friday. “Multiple firms declined to submit proposals for salvage due to liability and publicity concerns.”

Once CDS accepted the job, Mr. Juredin and his team began discussing the plan six to eight weeks in advance. Initially, the boat’s roadside location and its sheer size presented several challenges.

Mr. Juredin said Catsy was the largest boat his team has attempted to flip. But even after marina staff expressed trepidation, Mr. Juredin said he remained confident in his team.

“We had no doubt in our mind,” he said. “My team was key. They have a wealth of experience. The actual salvage plan and rotation was discussed several times in consultation with marine engineers and naval architects to ensure we didn’t further damage the boat in any way.”

Once word spread Friday that the operation was proceeding, crowds gathered to watch and record.

A suspenseful moment came when one of the straps that attached the cranes to the boat began ripping through the bottom of the hull, but onlookers burst into applause when the vessel finally reached the ground with no further damage, using what Meridian referred to in a video as the “nudge and catch” method. During the operation, the backhoe caught the side of the boat as it was being slowly “nudged” down.

Mr. Grant, now based in the United States Virgin Islands, spent seven years as captain of Catsy, on which he estimated he conducted about 100 charters. He said it wasn’t surprising that the hull ripped a bit.

Built in 2008 by Sunreef in Gdansk, Poland, the boat was the first 60-foot-plus catamaran in the VI, according to Mr. Ottiker, and prior to Irma it had undergone a series of major upgrades to expand the size of its cabins.

Given that history, Mr. Grant recalled how he felt when he saw the boat upside down after the hurricane.

“It was dramatic and surreal,” he said. “A boat is a funny thing. It cares for you; you care for it. I definitely went up and put my hand on her. It feels like they’ve got a soul.”

However, he never had any doubt that she would pull through.

“It’s an incredibly strong boat,” he said. “If any boat can survive, it’s that Sunreef.”

He recalled sailing the boat from Fort Lauderdale, Florida to the VI in 2009.

“Those were hard voyages,” he said. “The whole time I had her there wasn’t a crack in the bulkhead.”

With a new owner, Catsy’s future as a charter vessel remains unclear. However, Mr. Grant said, “I feel certain that they will fix it and that she’ll be on the water again.”