It has been more than a year since the Virgin Islands experienced a taste of Disney magic, but on Tuesday it returned when most of the 3,624 passengers aboard the …

END_OF_DOCUMENT_TOKEN_TO_BE_REPLACED 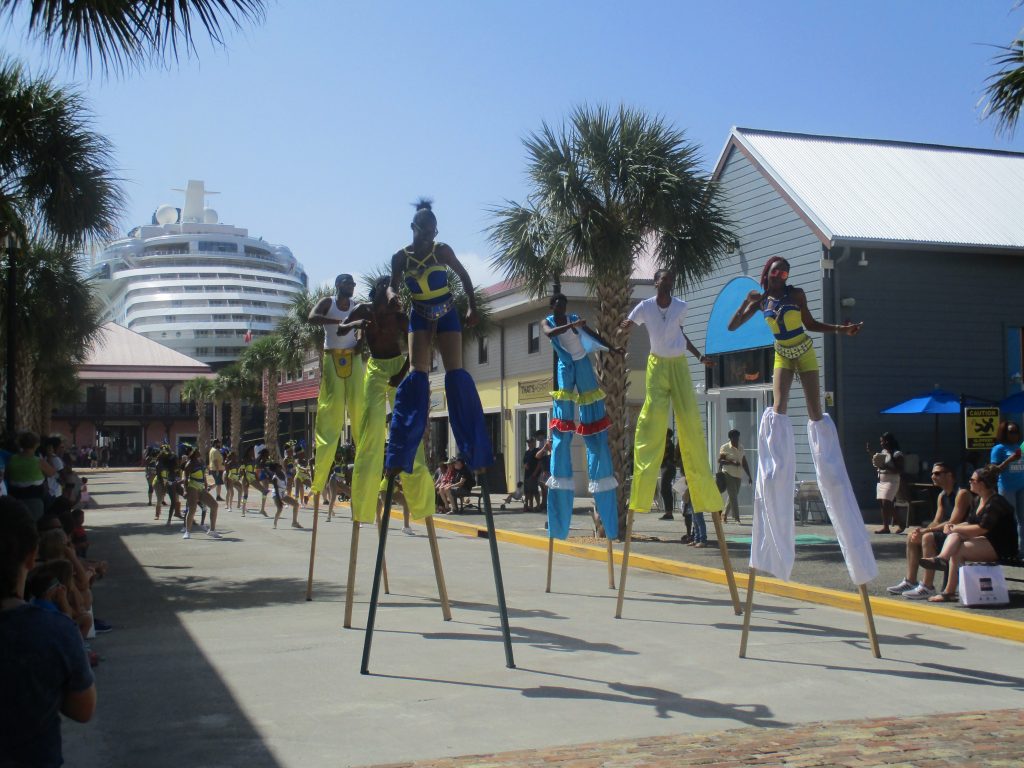 Moko jumbie dancers lead a parade through Tortola Pier Park, with the Disney Fantasy docked in the background. The vessel is Disney’s first to arrive in the territory since Hurricane Irma. (All Photos: CLAIRE SHEFCHIK)

It has been more than a year since the Virgin Islands experienced a taste of Disney magic, but on Tuesday it returned when most of the 3,624 passengers aboard the Disney Fantasy debarked in the Tortola Pier Park.

They poured out of their towering 340-metre-long ship to a joyful welcome, starting with a mini-parade that featured moko jumbies, the Razor Bladez fungi band, the Heritage Dancers, the Elite Sky and Elmore Stoutt High School troupes, and the Shooting Stars steel orchestra.

After Hurricane Irma devastated the territory, Disney rerouted ships away from the VI, citing health and safety concerns.

Although small ships returned in December, none had visited the VI since April.

And Cane Garden Bay, traditionally the most popular beach for cruise passengers, had not seen substantial numbers since before Irma. 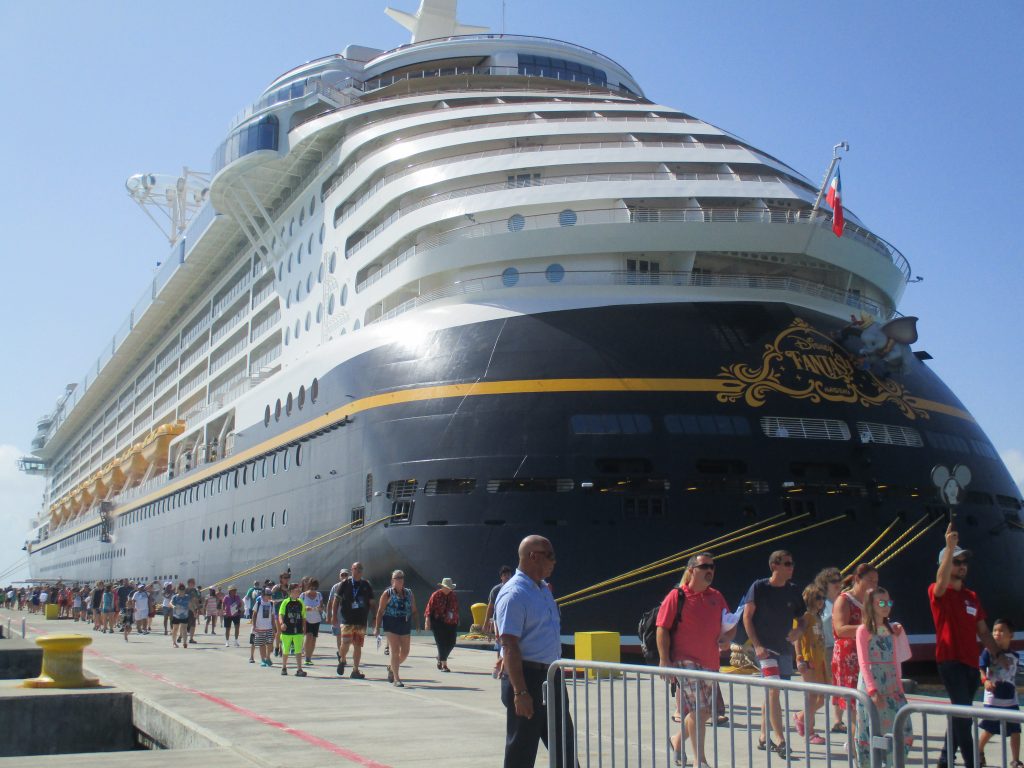 “Today is the day!” Communications and Works Minister Mark Vanterpool wrote in a Facebook post, adding, “I am here … responsible for the ports, including the magnificent Tortola Pier Park, to welcome the captain, crew and our lovely visitors to our beautiful Virgin Islands.”

He encouraged residents who spotted passengers walking around the territory to give them a warm welcome.

According to Mr. Lewis, nearly every retail establishment in the Pier Park was open, including some, like Diamonds International and Del Sol, that had been shuttered since Irma.

Above all, he added, the park pulled out all the stops because “we wanted to create excitement; we want to let everyone, locals and visitors alike, know how important the visit from Disney was today because it really signals the beginning of the arrival of the cruise ships.”

Fantasy passengers Dennis and Marie Benko — retired Walt Disney World employees from Orlando, Florida, who had cruised with Disney many times — marveled at the enthusiasm at the Pier Park and the clean surroundings.

“You did good that way,” Mr. Benko said. “We’re really impressed with the entertainment.” 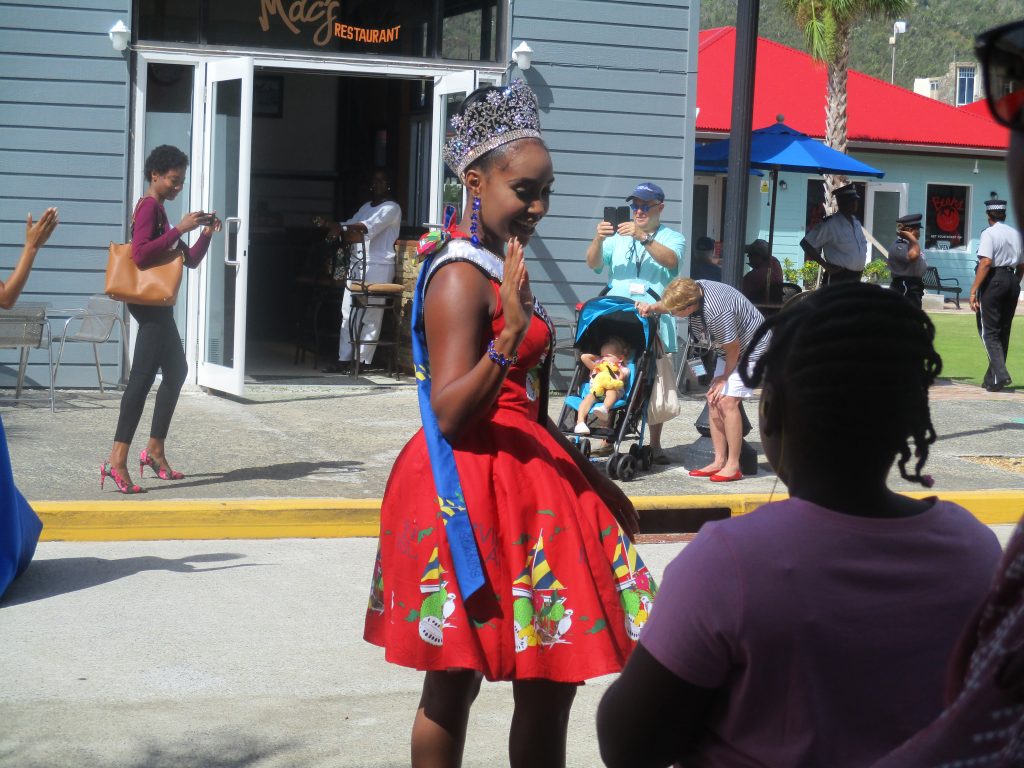 They noted that six months ago on the Fantasy, they visited Phillipsburg, St. Maarten, which, after Irma, substituted for Tortola on Disney’s itineraries. The hurricane damage in the VI didn’t concern them, they said, since they weren’t looking for a lot of bells and whistles so much as just “a tree and a beach.”

“St. Martin was more modern-looking; this is more island-looking,”Mr.Benko said.“This is more natural; for us, if you do too much modern, you lose the island.”

They were still deciding whether to visit Long Bay or CGB, but were leaning toward the less-developed option.

“We just want to do a little snorkeling at a beach that doesn’t have a lot of buildings and hotels,”he said.

Meanwhile, staff of the BVI Tourist Board were out in force directing passengers, according to BVITB Marketing Manager Keith Dawson.

“Our staff members were stationed at various locations, including Cane Garden Bay, and we actually have some on Jost Van Dyke and Virgin Gorda,” he said.

Ferries were on hand at the park to spirit passengers on daytrips to the sister islands.

“Persons can come and ask questions, [such as] where things were and how long it would take to get anywhere,” he explained.

The Tourist Board and the Ministry of Education and Culture also organised a scavenger hunt for passengers, exploring some of the historic buildings of Main Street. They were referred to by their traditional names, including the Old Custom House, Morris Titley’s Dwelling House and the Joshua Smith Bakery.

For instance, at 90 Main Street was “Mr. Howard Penn’s Shop,” which a sign outside explained used to sell barrels, rum and chicken wire. 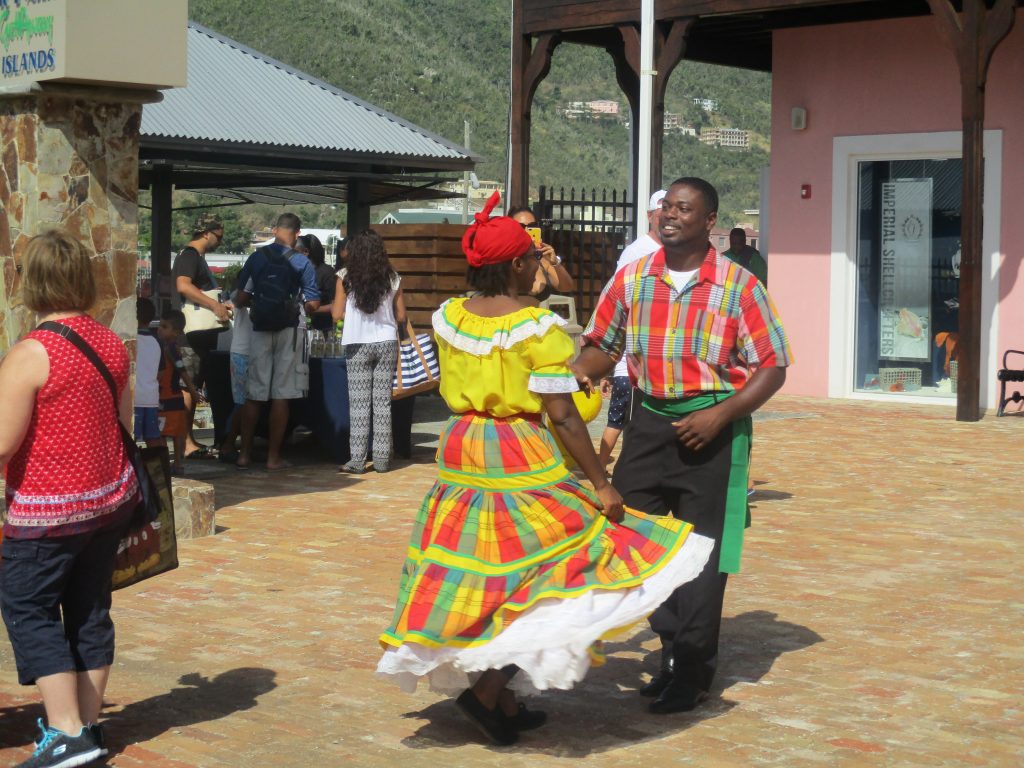 The sign read, “Mr. Penn wore three-piece suits and ties and carried an umbrella….The structure of this building is over 100 years old and was built around a giant boulder, which after several renovations still exists today.”

During the hunt, shop personnel played the roles of various historical characters of the VI.

“It’s exciting,” said Delma Maduro, co-owner of Camdem Gourmet Market in the Pier Park. Although she opened for business soon after Irma, she noted that luxury shops that depend more heavily on tourists were likely to get a huge boost, which in turn would be good for business for the area as a whole.

“I expect that we will do well because of the Disney ship and other ships that will be coming in short order,” Ms. Maduro added.

She also praised the work that had gone into preparing.

“We have to start somewhere; we’re not perfect, but I think the time is right,” she said, adding that drivers who go on excursions have to exercise some additional care. “Our roads have not been totally rehabilitated, but I think a lot of work has gone in preparing Cane Garden Bay … and making the island as a whole a lot more welcoming.”