While students throughout the territory returned to school last week, officials continue to deal with infrastructure issues at multiple facilities. Faculty and more than 300 students from Althea Scatliffe Primary …

END_OF_DOCUMENT_TOKEN_TO_BE_REPLACED 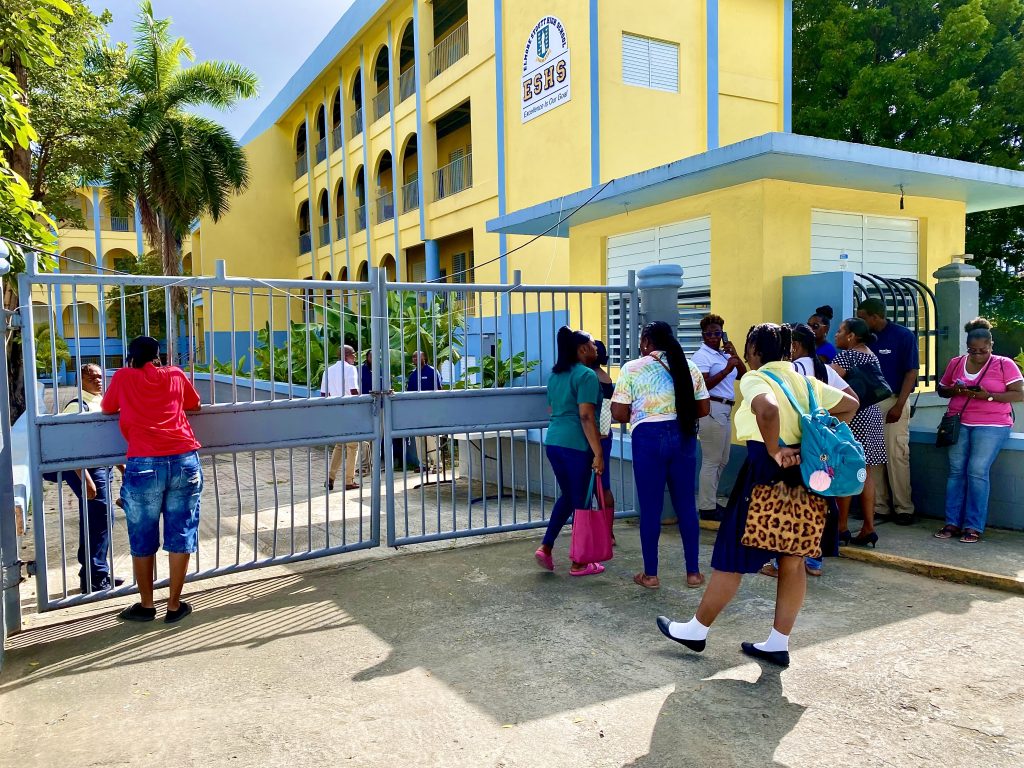 Families drop off students at Elmore Stoutt High School on Monday to start a new school year. Officials had hoped new buildings would be ready to receive students this month, but the date was pushed to October at the earliest due to a delay in the shipment of supplies. (Photo: DANA KAMPA)

While students throughout the territory returned to school last week, officials continue to deal with infrastructure issues at multiple facilities.

Faculty and more than 300 students from Althea Scatliffe Primary School had already been displaced following the closure of the school in June, when concerns were raised about its structural integrity.

While those students were redistributed to other primary schools, Enis Adams Primary was still in the midst of completing construction on its second floor as part of efforts to accommodate the ASPS overflow, according to Education, Culture, Youth Affairs and Sports Minister Sharie De Castro.

Students from both schools are set to attend full-day sessions at Cane Garden Bay Baptist Church while work is completed on the second floor of EAPS, the minister said in a statement on Sept. 7.

She added that this arrangement was conceived after parents expressed concerned about their students only attending partial school days at EAPS under a previous plan.

“Several persons in attendance expressed concerns about the [initial] plan, particularly about having a section of students attend half day while the building was being completed,” Ms. De Castro said. “With advice from the principals, the Ministry of Education approached the leadership of the Cane Garden Bay Baptist Church in an effort to secure additional space for the school to use.”

She said the church agreed, allowing the school to use the classrooms located in its annex until Dec. 9.

The non-profit Unite BVI recently pledged to fund construction of 14 extra classrooms for students at EAPS and Francis Lettsome Primary School. Until ASPS is repaired or replaced, though, students will be housed at various primary schools in the VI.

Ms. De Castro did not say exactly how many students would be attending school at the CGB church annex, but said it will house two classes of grade five students and three classes of grade six students daily from 8:40 a.m. to 3:15 p.m., overseen by an administrator and a senior teacher.

All remaining students will attend school at the EAPS campus for the same time period, she said.

The minister added that transportation will be provided from the Festival Village Grounds to both locations. Guardians can drop off students at 8 a.m. and pick them up at 3:50 p.m.

With the start of a new year, the BVI Teacher’s Union is encouraging instructors throughout the territory to embrace the message to “Spread Light Always,” BVITU Vice President Sean Henry said.

He added that teachers seem energised and hopeful for a successful school year despite the infrastructure challenges.

However, he said teachers need adequate, updated resources to support their students. This includes proper internet infrastructure to facilitate online teaching and equipment for in-person instruction, particularly for STEAM subjects, he added.

Mr. Henry said the public can play an important role in supporting teachers as well, whether by allowing an instructor to move ahead in line at the bank or engaging with students.

“You have to look at how it affects the way they are able to get resources themselves,” he said. “As a teacher, I spent half my summer vacation going into different store and checking out different things I could bring back to my classroom. Now, as things are getting more expensive, I’m not able to do that as much.”

The union wrote in a press release that it is proud of the strides made last year to ensure conditions improve through grants and the payment of increments, but there is more to be done.

“Though we are skeletally resourced, we are expected to be the muscle and energy behind our positive movement,” the union wrote. “Fortunately, our dark cloud bears a bright shiny silver lining! We, as teachers, are the purveyors of education, which is identified as integral to the growth and development of our country. There was also the realisation that we are not easily replaced.”