Local News > CGB to get new sewerage plant next year

CGB to get new sewerage plant next year

Residents and visitors at Cane Garden Bay will enjoy cleaner seawater next year, according to officials from the Ministry of Communications and Works, who, alongside Second District Representative Mitch Turnbull, …

END_OF_DOCUMENT_TOKEN_TO_BE_REPLACED 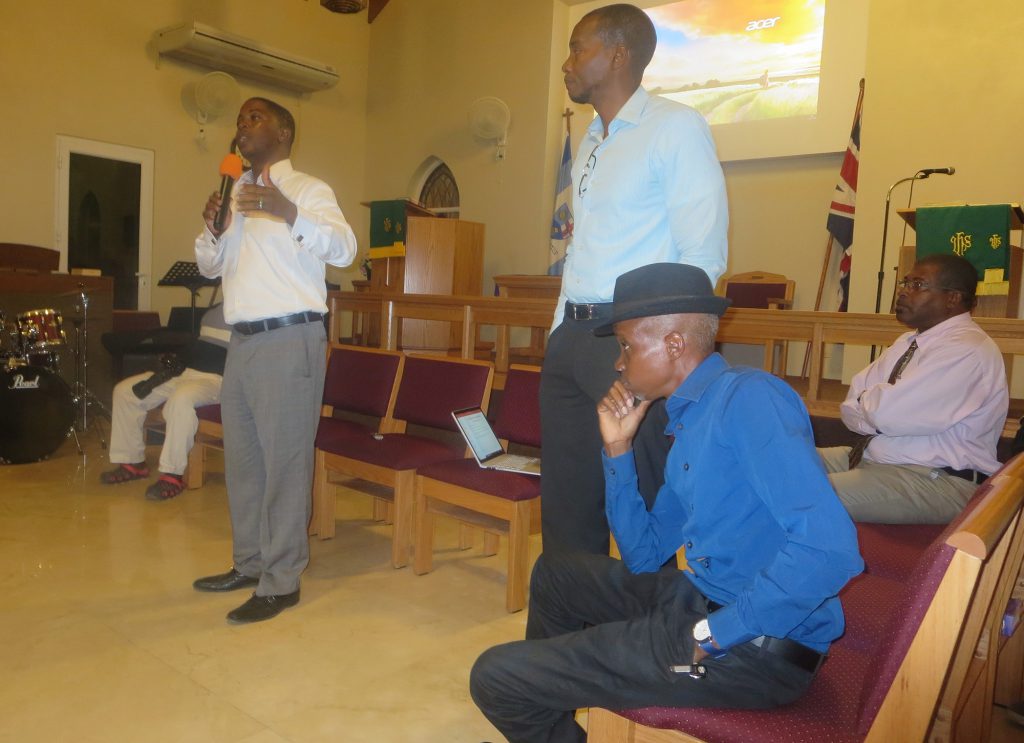 Second District Representative Mitch Turnbull speaks alongside officials from the Ministry of Communications and Works at a public meeting at Cane Garden Bay Methodist Church about plans for a new sewerage plant in CGB. Photo: CLAIRE SHEFCHIK

Residents and visitors at Cane Garden Bay will enjoy cleaner seawater next year, according to officials from the Ministry of Communications and Works, who, alongside Second District Representative Mitch Turnbull, unveiled plans last Thursday for a new $1.6 million sewerage plant for the village.

The project, funded by the Caribbean Development Bank recovery loan, is slated to begin in the third quarter of 2018 and be completed in 2019.

“The main purpose of this project is to make the plant more efficient,” said MCW Deputy Secretary Jeremy Hodge during a public meeting CGB Methodist Church. “The effluent line that goes out into the ocean will be extended into the channel, providing a safer, cleaner environment for all people.”

The pumps will also be converted to connect to six-inch lines instead of four-inch lines, and relocated to the road instead of in front of residents’ homes, officials explained.

“In most of your yards you have a lift station that takes the sewage from your yard into the main sewage plant,” Mr. Hodge said. “With this programme, we’re going to upgrade the sewerage lines to be bigger, stronger, more durable.”

He added that the pumps would be less likely to break in the future and cause overflows.

According to Keith Smith, the technical engineering consultant who is heading up the project for the government, the aging plant, which was constructed in 2000, is inadequate for the amount of sewage it is now required to pump.

Repairs and maintenance costs are high, and the frequent failure of the lift stations has led to a sewage truck having to pump daily.

The malfunctioning plant, where operations were knocked out after Hurricane Irma and only recently came back online, creates health and safety hazards for residents, including students attending the Ivan Dawson Primary School.

According to officials, the school frequently suffers from overflows during power outages. The sewage also flows into streets and into the soil, and an environmental impact assessment determined it leads to the “long-term degradation” of beaches. Currently, the effluent going into the bay is inadequately treated, they added. The beach at CGB was declared closed Dec. 7 due to poor water quality.

The water flowing out of the new plant will be treated to a tertiary level, which Mr. Hodge said is the ”recommended level for water being discharged into the sea.”

The water will not be drinkable, but it will be suitable for uses such as watering plants and washing clothes, and it will be visually indistinguishable from potable water, he added.

Two residents at the meeting expressed concern about the treated water being pumped back into the sea, and suggested that it should be directed back onto land so that residents can use it for gardening and other purposes.

Mr. Hodge reminded them that the system is not set up to do that because of cost.

“One of the things that has to happen is to get this system functional for the future,” he said. “So when you’re talking about taking the treated water from the treatment plant back to your houses, it’s an entirely different system.”

However, he added that the ministry will take their suggestion into consideration for the future.

Several residents also expressed doubt that the project will be completed in the estimated timeframe, but Mr. Hodge reassured them.

“The funding is secure,” he said.