The sun blazed and tourism season was winding down, but the co-owners of Golden Journey Concierge Service were full of enthusiasm as they talked to potential customers at the Buy …

END_OF_DOCUMENT_TOKEN_TO_BE_REPLACED 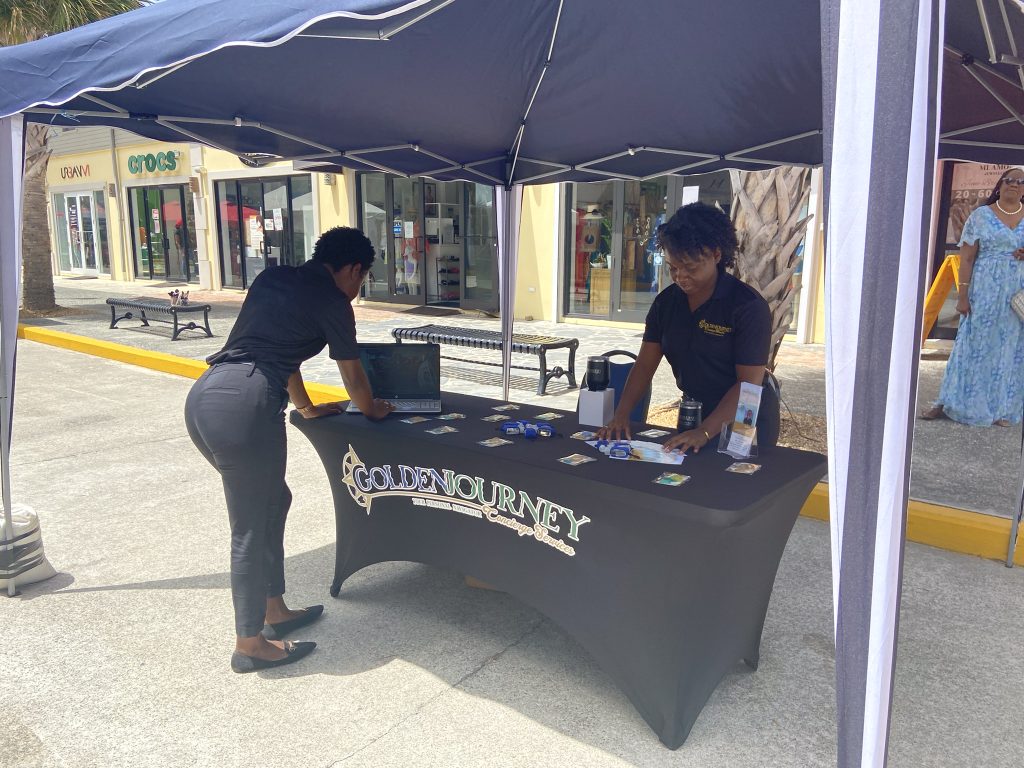 The sun blazed and tourism season was winding down, but the co-owners of Golden Journey Concierge Service were full of enthusiasm as they talked to potential customers at the Buy BVI Business Expo, which was held Friday and Saturday at the Cyril B. Romney Tortola Pier Park.

The event featured 18 member businesses of the BVI Chamber of Commerce and Hotel Association.

Golden Journey specialises in curating vacation package tours and experiences for business and leisure travellers — an area the owners said has tremendous potential for growth.

“But we’ve had a lot of difficulties,” explained Gia Fraser, co-owner of the company she started in 2018 with her sister Georgia.

One of her biggest challenges post-pandemic is making sure that guests feel it’s safe to explore again, she explained.

“The guest needs to be sure that they’re comfortable, and make sure that we’re safe enough and comfortable enough so that they will come back,” Ms. Fraser explained.

BVICCHA Executive Director Keiyia Jackson-George said the expo itself was delayed for two years due to the pandemic, and it was only able to resume this year because Covid-related restrictions have loosened. She added that businesses she has informally surveyed have supported easing restrictions such as mask mandates and capacity limits.

However, she said, myriad challenges are still facing VI businesses in 2022, including sky-high prices and supply chain issues linked to the war in Ukraine.

The supply chain issue that left store shelves bare of some items in recent months hasn’t gone away, according to the director.

She explained that price increases prevent consumers from shopping locally and pumping money into the economy, and that hurts everybody.

Though consumers often see price increases as a sign that businesses are being greedy, she said that’s usually not the case.

“I am personally against price control,” she added. “Again, there are better ways to deal with this. I would love to see a holiday on payroll tax, for instance.”

Ms. Jackson-George said that land- and sea-based tour businesses are struggling to keep up with the rapid changes in gasoline prices, which now routinely exceed $5 a gallon. She added that some have taken down their pricing pages because the price of gasoline keeps rising by the day.

Though the government temporarily cut import duties to five percent in April, Ms. Jackson-George said this savings often is not being passed down to the everyday consumer. She added that she would like to see further tax cuts on necessities like baby food, feminine products, soap and toothpaste.

“Those things that you’re probably going to be purchasing for your household, these essential items: I would love to see them at zero percent,” she said.

Chamber members hope to propose such ideas when they meet soon with Premier Dr. Natalio “Sowande” Wheatley, according to Ms. Jackson-George.