After six years away from the Virgin Islands, John and Maxine White felt that they were back where they belong on Friday: docked in their catamaran Nutmeg at Nanny Cay for the …

END_OF_DOCUMENT_TOKEN_TO_BE_REPLACED 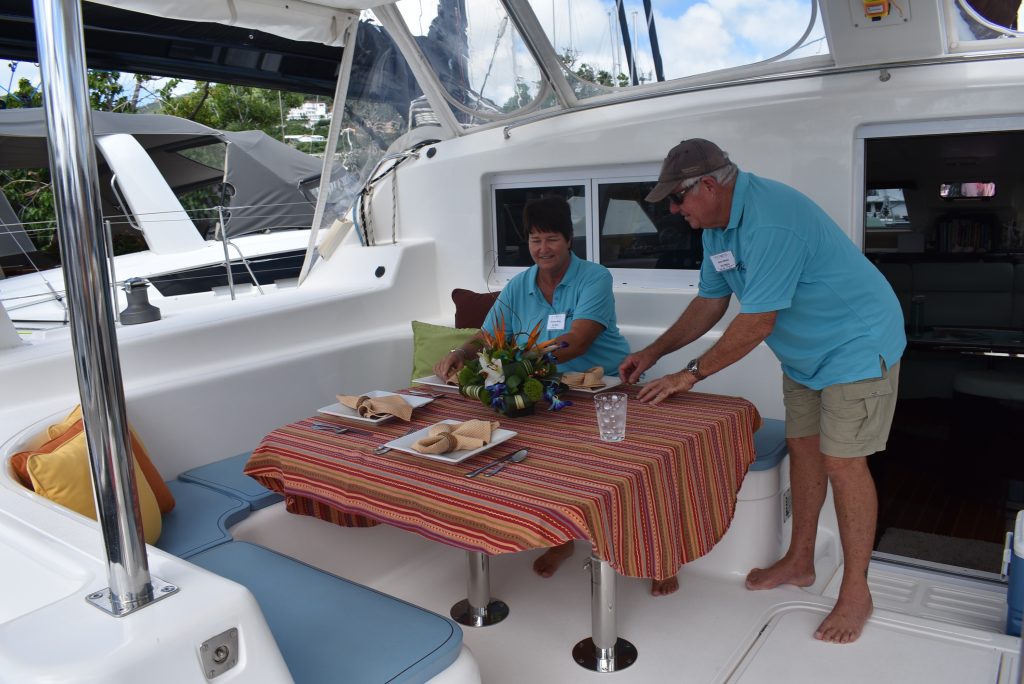 John and Maxine White set the table aboard the yacht Nutmeg as they prepare to welcome visiting brokers on Friday at Nanny Cay during the annual BVI Charter Yacht Show. (Photo: CLAIRE SHEFCHIK)

After six years away from the Virgin Islands, John and Maxine White felt that they were back where they belong on Friday: docked in their catamaran Nutmeg at Nanny Cay for the 2018 BVI Charter Yacht Show.

“We got married in Cane Garden Bay, at Quito’s, 26 years ago,”said Mr. White, who up until six weeks ago was working as an Uber driver in Florida.

Then he got the call that CharterPort BVI had a yacht for them to sail in the VI.

The future is looking similarly bright for many of the exhibited yachts, especially compared to a year ago, according to Janet Oliver, executive director of the Charter Yacht Society, which organises the annual show.

“We thought it was nothing short of miraculous that we had any boats here last year,” Ms. Oliver said.

The 2017 show took place barely six weeks after Irma damaged some 80 percent of the yachts in the territory. Then just 20 of them managed to stagger into the docks at Nanny Cay, down from the usual 70.

At the time, crews were just beginning to take stock of the damage, revise their itineraries, and figure out how to coax reluctant passengers back to the territory.

This year, things are busier, with 45 boats represented, Ms. Oliver said, adding that this pace of recovery coincides roughly with the society’s current membership.

“We lost more boats than we initially thought we would,” she admitted. “You look at the boat and say, ‘There’s a mast missing and other boats have managed to survive that. However, after insurance kicked in and the survey was done, the structural damage was too extensive.’”

So what will it take to boost the numbers back to pre- Irma levels?

“It’s not typically something that happens really quickly because it’s a large investment. … If an owner lost a boat, it might take a while to come to that conclusion to get back in the industry.”

Crew might have migrated elsewhere in the meantime, she explained.

Still, even among the re- building, there was a newfound buzz last week, as brokers and crews flitted from the culinary contest to the quiz night to the business expo. One of the most popular events this year was “Unveiling the Mysteries of the BVI,” a talk by historian Dr. Mitch Kent, which drew a curious crowd.

On Friday, catamaran Foxy Lady was crowned Best in Show.

“I think last year was very emotional,” Ms. Oliver said. “This year there’s a lot of excitement about the year ahead. We are on the road to recovery.”

“Already this year, we had an anchorage to ourselves at Peter Island and Salt Island,” said Mark Duncan, sitting aboard the yacht Azuria. “Two years ago, that would have never happened.”

Mr. Duncan — whose previous boat, Viking Dream, was destroyed in Irma — said he already has 22 charters booked for the coming year, which prompted him and his wife, chef Sally Duncan, to debate whether they needed to attend the show.

However, he added that they “absolutely” made the right choice, given the large number of brokers attending: nearly 130, more than five times last year’s attendance.

Many of them hadn’t yet seen the couple on their new boat. Mr. Duncan said he’s telling brokers that in order

to avoid seeing wreckage, he will steer away from Tortola and focus on islands where the landscape is still pristine, although he’s also avoiding some anchorages on Norman and Peter islands due to reef damage.

“Generally speaking, the islands are still beautiful; the water is crystal clear,” he said.

The captain is also impressed with the number of reopened restaurants and bars, and some of his repeat guests have noticed that VI residents seem friendlier now.

On Friday, the last day of the four-day show, dozens of brokers were pouring off a tour boat that had taken them to North Sound, Virgin Gorda, to get a firsthand look at the recovery there. Many of them hadn’t made last year’s show and were curious to gauge the progress.

“I’ve been saying positive things about the VI all along,” said broker Dennis Dori of the Tampa-based Charter the Caribbean, who took the North Sound tour.

He has been visiting the VI by boat for almost 40 years, though recently he sold his brokerage and thought himself out of the business for good.

After Irma, however, he felt drawn to return.

“I felt I had to be there to see not only the boats but to see what the conditions were, because you don’t get the straight story at home,” he explained. “I love this place a lot. I write a newsletter to my clients every month and I always write positive articles.”

Although favourite North Sound spots like the Bitter End Yacht Club are still sorely missed, he said, the territory’s appeal has not changed from when he first visited.

“Yes, the shoreside is still ripped up in some places, but from a boat you wouldn’t know anything happened,” he explained.

Mike Johnson, a Florida-based broker with Exclusive Charter Service who has been away for three years, said the recovery is happening “slower than I thought.”

However, even before he made the trip himself, he wasn’t discouraging guests from coming.

“It’s getting back to normal slowly,” he said. “There are still plenty of beaches, not as crowded. Come and you’d have a great vacation.”

For Mr. and Ms. White, the time is right to welcome guests to do just that. Their journey in and out of the charter industry has been a ride in itself, taking them to the United States and Belize.

His wife finally returned to the VI in May for the spring boat show, but she hasn’t had the chance to sail a charter here yet. However, after being in business on Nutmeg for two weeks, they’ve already booked five charters, and they’re excited — hurricane or no hurricane.

“Our life is always a surprise,” Mr. White said. “We just roll with it.”

His wife added, “People have energy, which is a nice thing that sometimes wasn’t here before. We are so looking forward to getting out there and seeing old friends. It’s a great industry.”