When the wind dies down, sailboat charterers in the Virgin Islands often have to switch to diesel power. When they do, the calming sounds of the sea can be drowned …

END_OF_DOCUMENT_TOKEN_TO_BE_REPLACED 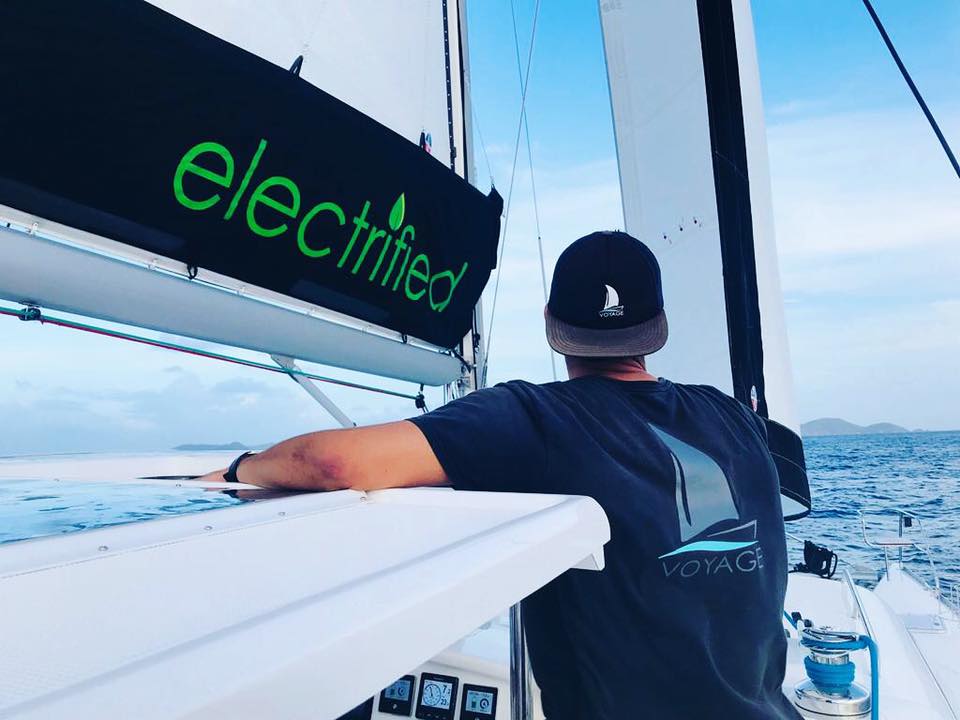 When the wind dies down, sailboat charterers in the Virgin Islands often have to switch to diesel power.

When they do, the calming sounds of the sea can be drowned out by the grinding of a motor, and generators powering air conditioning and other onboard conveniences add to the noise.

But on Voyage Charters’ new catamaran, Electrified, guests and crew won’t have that problem.

“When you’re motoring, you don’t have the sound or the smell of diesel engines,” said Peter Jones, yacht sales manager for the charter company, which is the worldwide exclusive dealer for Voyage Yachts, a boat manufacturer based in South Africa that the charter company co-owns.

On a sailing charter, mooring is necessary when there’s no wind, and even when there is wind sailboats need to use diesel engines for tricky maneouvres like docking. Fuel costs are typically hundreds of dollars a week.

But the Voyage 480 catamaran, which arrived from South Africa in February, is powered by two 15-kilowatt Oceanvolt electric motors, solar panels and a Valence 35kWh lithium battery pack, and costs are zero.

Those batteries not only propel the boat forward, but power the air conditioning and reverse-osmosis watermakers, eliminating the need to run a diesel generator.

“When the boat is under sail,” Mr. Jones added, “the propellers can turn like turbines and recharge your batteries.”

So far, response to the new vessel has been enthusiastic, with charterers clamoring to experience the silence for themselves. At least 20 groups have booked trips, according to Mr. Jones.

More will likely get the chance in the future.

The Electrified is the first boat built by the company with the electric propulsion system, and two more are in production. At least one of them — at 59 feet, an even bigger model — may find its way to the VI.

Mr. Jones said that Electrified’s arrival in the VI was hastened by Hurricane Irma. Voyage lost around half its yachts to the storm, including the boat previously owned by Electrified’s owner, putting him in the market for a replacement.

“It was not a new idea before the hurricanes,” he said, but “it needed someone to take the risk and make the investment. We had done our re- search and he had done the research, so he took the punt.”

Not only is the boat the
first electric yacht in the VI, according to Mr. Jones, but it is among the few electric boats in the world that were built electric as opposed to being retrofitted. It’s the only such boat that he knows of that’s part of a charter fleet, he added.

Of the electric boats that do exist, he explained, most are used by private owners for cruising.

“There’s a lot of interest in people who want to buy boats to live aboard,” Mr. Jones said.

But, he pointed out, chartering the boat first is a good way try out the lifestyle on vacation before going all in.

“We’ve done charters like that with folks and we’ve got a quite loyal client base to try it out,” he said.

There are hundreds of charter boats in the VI, and Mr. Jones doesn’t expect this technology to replace diesel any time soon.

“It’s still kind of new technology, even for cars and for homes,” he said. “For boats, it hasn’t been done successfully for very long. Few people have wanted to take that risk.”

However, he does predict that more of these vessels will be traversing VI waters in the future, as more charter operators realise their advantages.

He suspects the cost has been a major factor holding back potential buyers. A 48- foot catamaran is not cheap to begin with, and the financial benefits of going electric aren’t always immediate.

“It remains to be seen when and if the savings on fuel and diesel and mechanical maintenance would pay off,” he said. “It could be after a couple years.”

But, he added, diesel engine maintenance is also costly, time-consuming and complicated to learn.

“We’ve already seen the difference in maintenance, compared to other new boats, is night and day,” Mr. Jones said. “From a charter operator’s point of view it’s attractive.”