When the 2017 Christmas Bird Count showed that bird populations in the Virgin Islands had been decimated by the previous September’s hurricanes, Clive Petrovic was not surprised.  A year later, …

END_OF_DOCUMENT_TOKEN_TO_BE_REPLACED 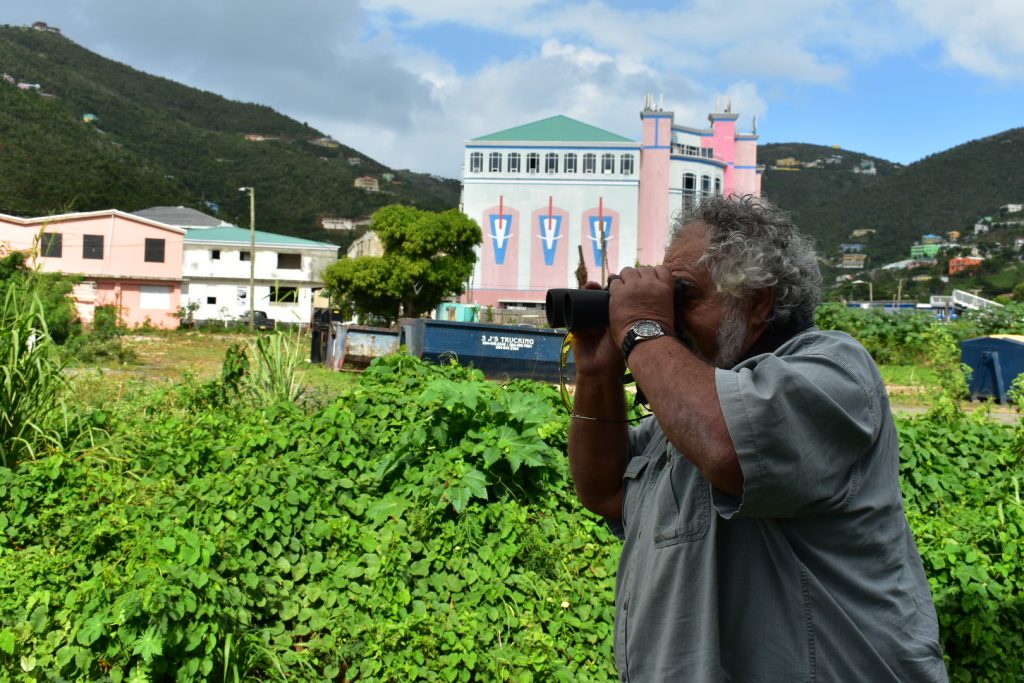 Biologist Clive Petrovic looks for birds in Road Town during the annual Christmas Bird Count on Dec. 28. He didn’t find as many as he used to see before Hurricane Irma. (Photo: NIA DOUGLAS)

When the 2017 Christmas Bird Count showed that bird populations in the Virgin Islands had been decimated by the previous September’s hurricanes, Clive Petrovic was not surprised.

A year later, however, the biologist believes that the numbers are still down and that the community must do its part to help them recuperate.

“When the bird populations are low, Mother Nature is telling us something,” Mr. Petrovic said as he scanned the shorelines of Wickhams Cay during the Dec. 28 Christmas Bird Count.

Though he had counted some 15 species between Cane Garden Bay and Road Town, he was surprised to see so few specimens per each species.

While peering through his binoculars, Mr. Petrovic frowned at a cluster of pelicans near Fort Burt.

“There should be more of them,” he said. “That whole dock should be full of pelicans.”

The volunteer bird count — which also included a session on Anegada on Friday — is organised here by the National Parks Trust. Like other agencies around the region, the NPT submits results to the National Audubon Society, a United States-based non-profit organisation dedicated to conserving birds and their environments.

“People were really keen to get out there and look,” Ms. Woodfield Pascoe said, adding that she is pleased with the amount of interest in birds that she has seen post-hurricanes. “It might not seem like such a priority, but it’s really assuring.”

All told, 23 species and 340 birds were counted in Anegada, and the Tortola numbers are still being tallied, according to the NPT.

Mr. Petrovic has been participating in the count for about 30 years. Each year, he typically counts some 30 species on Tortola, but he fears that the re-growth after the 2017 hurricanes has been slowed by other issues.

Explaining that birds are a “window to the environment,” Mr. Petrovic said that examining their populations can help identify environmental problems.

“The development causes pollution,” he said. “We got to get a handle on pollution and keep it in check.”

Other threats to birds, he said, include destruction of mangroves and the use of pesticides and rat poison.

Asked if some native VI birds are at risk of becoming endangered, he said “absolutely,” adding that he has seen evidence of local birds like chicken hawks suffering from poisoning and other manmade threats.

As Mr. Petrovic drove across the island jotting down all of the pelicans, doves, egrets, sparrows, grebes and other birds that he came across, he explained that before the VI relied on tourism and financial services, fishing and agriculture were among the most substantial industries.

Polluting the environment, he explained, causes these industries to suffer.

“We don’t know what’s going to happen in the future,” he said. “The BVI may well have to go back to [those industries] to survive.”

Though overall numbers were down this year, Mr. Petrovic was pleased to note that many of the birds he did spot were juveniles, which suggested that there has been breeding following the hurricanes.

The National Audubon Society — which hosts the annual count “to assess the health of bird populations, and to help guide conservation action” — has records of VI counts reaching back to 1988.