On Monday, Tomas Dardet and nearly 20 of his friends and family members toured The Baths in Virgin Gorda, climbing in and out of the rock pools and exploring the …

END_OF_DOCUMENT_TOKEN_TO_BE_REPLACED 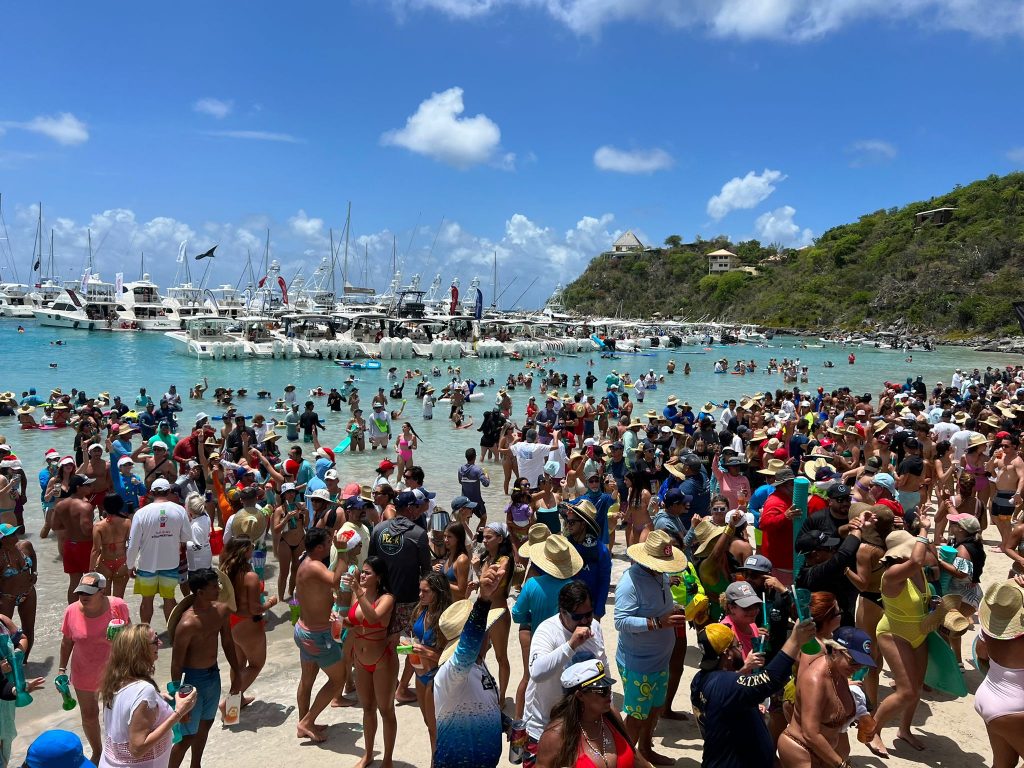 On Monday, Tomas Dardet and nearly 20 of his friends and family members toured The Baths in Virgin Gorda, climbing in and out of the rock pools and exploring the grottoes.

Although the popular tourist attraction was crowded, the Puerto Rican felt right at home.

“Everybody was speaking Spanish,” he said with a laugh. “We did the whole tour. And it was full of Puerto Ricans everywhere. We were the only people buying at the concessionary store down by the beach where they sell hamburgers and hotdogs to the charters. It was just Puerto Ricans.”

They had come to the territory for the annual Christmas in July celebration. The main event — in Pond Bay, Virgin Gorda on Saturday — smashed attendance records, with more than 400 boats and over 4,000 attendees total, according to Mr. Dardet, the BVI Tourist Board representative in Puerto Rico who works to promote the event.

The so-called “Puerto Rican Navy” — a group of boaters who for years have arrived on VI shores near the end of the tourist season, giving the industry a needed boost — couldn’t wait to get back after two years of cancellations, Mr. Dardet explained.

For businesses still struggling to get back on their feet after border closures, restrictions and dismal arrival numbers, that boost is more important than ever.

“We believe that it’s an investment that helps several sectors,” Mr. Dardet explained, adding that the charter industry is a major beneficiary. “All businesses have their slow seasons, their low season in the summer. And this event, even though you get a lot of people with boats coming over, you get a lot of people without boats coming and renting boats. So that is an important sector that we believe is positively affected.”

Attendees don’t just stay for the main event on Saturday, he added, noting the crowd at The Baths on Monday.

“People come and they spend a week or two weeks, and so they move around,” he said. “Right now if you see Pond Bay, maybe there’s about 10 boats at most anchored there. Everybody has left and moved to different places: to Bitter End, Leverick Bay; to Jost Van Dyke or Norman Island. And so they’re spreading the investment of the money all over the territory.”

Attendees don’t want to haul all their own food and beverages from Puerto Rico, he explained, noting that most eat only one or two meals onboard per day.

“Because whoever’s in charge of the various meals, whether it’s the husband or the wife, they don’t want to be cooking all the time,” he said. “It’s a vacation. You’ve gotta go to shore. It’s like a partial provisioning, not for the whole time.”

“All of the marinas were full during this week,” he added. “There was no space. A lot of them may come in small boats. Looking for villas and hotels with docks, so they can sleep in a room. My brother is staying at Scrub Island, and I know it’s sold out.”

As a former boat owner, Mr. Dardet recalled the amounts of money he personally spread around the VI over the past 35 years.

“I just sold my boat in 2019,” he said. “I would always spend a lot on the island even if I was in my boat. I would end up always spending something with a mechanic at Virgin Gorda Yacht Harbour, money on diesel fuel, bread and guava tart and lunch and dinner — all this stuff.”

Although Puerto Ricans have been informally boating to the VI every year for decades, the official Christmas in July event is celebrating its 10th anniversary this year, Mr. Dardet said.

What started out as an evening party in Pond Bay has now become a daytime fiesta, with major sponsors Wally Castro Marine and Marcos Rivera in charge of setting up a tent and stage and hiring local bands and deejays to entertain the crowd.

Likewise, the relationship between PR and VI residents has also evolved over the years to one of mutual appreciation, according to Mr. Dardet.

“We’ve been very well received,” the promoter said. “I think people from the BVI in general really appreciate the Puerto Rican market. More so after the hurricanes.”

Shortly after Hurricane Irma hit in 2017, a flotilla of boats and planes were some of the first to arrive to help, bearing badly needed food, water and other supplies.

“The people of the BVI saw that, and we felt that the experience helped at all levels,” recalled Mr. Dardet. “Nobody can say they didn’t receive support from Puerto Rico from one way or the other. And I think that in a way has helped, you know, open that communication and that mutual admiration.”

Tourism Director Clive McCoy called Christmas in July “one of the most awaited events” in the territory.

“We are doing everything possible so the Puerto Rican Navy can return and enjoy the beauty of our territory along with us,” Mr. McCoy said. “The bonds that unite us are many, and we are very excited to welcome them back.”

The influx of visitors was a lot for the Customs and Immigration departments to handle at once, the director said, but he praised their efforts and noted that other government agencies supported the event as well.

According to Mr. Dardet, “It was the biggest challenge entering the ports, and even with that challenge, customs and immigration made a really big effort to open more ports during the days of the event. So they added a temporary port of entry at Nanny Cay. All the way from the top to the bottom, the support was really, really amazing.”