Local News > Christmas in the City’s new location a hit

Christmas in the City’s new location a hit

END_OF_DOCUMENT_TOKEN_TO_BE_REPLACED 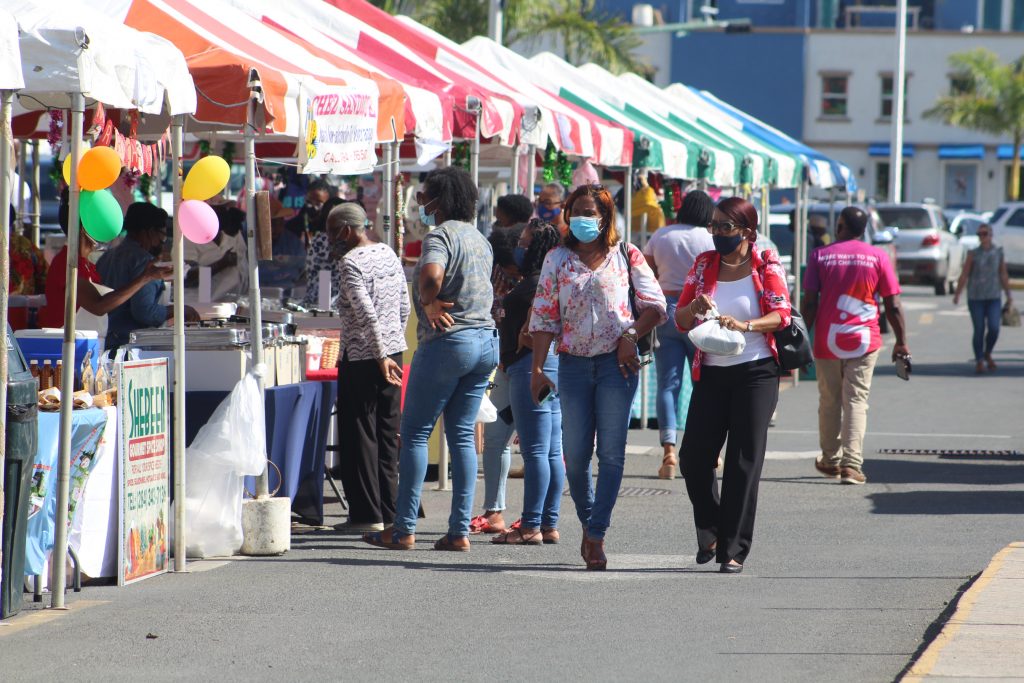 Residents shop for gifts, local food and other items on Friday afternoon during Christmas in the City. The event was held on Shore Way Drive in Road Town for the first time, and organisers said the new location was a success. (Photo: ZARRIN TASNIM AHMED)

Sounds of steel pans and Christmas tunes filled the streets of Road Town Friday afternoon as the 23rd annual Christmas in the City kicked off.

“Christmas in the City 2021 — which is the 23rd annual one — went extremely, extremely well,” said City Manager Janis Braithwaite-Edwards.

Cars caught in traffic along Waterfront Drive had a front seat view of the festivities, which took place for the first time on the adjacent Shore Way Drive.

Last year, the event was held in the parking lot of the Ralph T. O’Neal Administration Complex, but construction at the site forced organisers to search for a new location this year.

“The Central Administration Complex parking lot was a good move, but that area isn’t paved and there were a lot of windstorms and dust [last year],” Ms. Braithwaite-Ed-wards said. “That was hard for people dealing with food.”

About 40 vendors set up in the new location, selling homemade food and goods as well as a variety of Christmas presents. Attendees strolled by the booths, taking lunch breaks with friends and stopping by to enjoy the music.

“When we look for a location, one thing we keep in mind is safety,” Ms. Braithwaite-Edwards added. “A lot of people allow their young people to come to Christmas in the City because they know that it’s in a secure area.”

Next year, the event will be held on the same street, she said.

Dancing by the stage

On Friday afternoon, deejays played music on a stage set up next to One Stop Mall, and a few attendees danced nearby.

Others took refuge from the hot sun in chairs lined up under a tent, some of them eating food from the vendors.

Many local businesses that have their own shops throughout the territory set up at the event, often offering discounts on Christmas gifts.

VI Books and Things sold books, puzzles, educational resources, games and more during the two-day event. Fragrance store Oasis VI had dozens of scents to choose from in its display.

Rosie’s Catering Service had stewed lobster on the menu, along with whelks, mutton, conch and chicken.

One booth raised funds for the Jaleel Cameron Foundation by selling lunch tickets. Those who supported the cause were given free cotton candy made by the mother-daughter duo who run The Cotton Candy Club.

For Philip Boyce, the occasion was a chance to showcase the fruit juices he makes with his wife. This year, he was offering samples of avocado juice.

“Avocado doesn’t taste very good on its own, but I know what to put with it,” he said while sharing his recipe.

His business, Chez Sandique, has been in Road Town for 20 years, he said.

The St. Vincent native recalled a special wedding anniversary when his daughters Sandy and Monique transformed their home into a restaurant and served dinner. They called the “restaurant” Chez Sandique — a name that stuck.

Friday was just the beginning of the festivities, which lasted through Saturday.

In the evenings, local groups like ABM Band and Adagio Dance School put on performances, drawing large crowds to the centre of town. Students from Althea Scatliffe Primary School put on four performances over two days.

“It took a lot of coordination to make [the event] happen,” she said. “I’m grateful for the support of the community.”