Christmas on DeCastro Street thrives thanks to late Delores Christopher

If there was any doubt about the survival of Christmas on DeCastro Street in the wake of the death of founder Delores Christopher, those fears were put to rest by …

END_OF_DOCUMENT_TOKEN_TO_BE_REPLACED 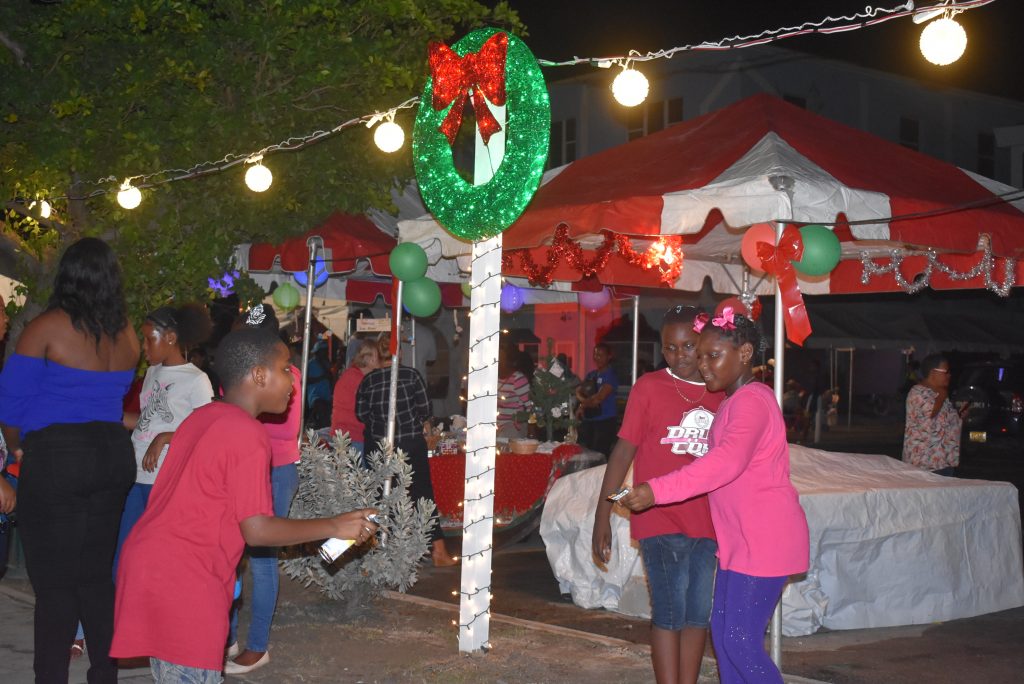 Children spray each other with Silly String they bought at the Christmas on De Castro Street event on Friday. (Photo: CLAIRE SHEFCHIK)

If there was any doubt about the survival of Christmas on DeCastro Street in the wake of the death of founder Delores Christopher, those fears were put to rest by the late Ms. Christopher herself.

“What’s important to know is that Delores actually put this together before her passing,” organising committee member Amberley Crabbe said on Friday night as she took a break from her emcee duties at the event’s 20th anniversary celebration to amble up and down the blocked-off street, where 39 vendors displayed food, crafts, toys and a cornucopia of miscellaneous wares. “We just pretty much had to figure out all that she had in place. She did it all.”

As Ms. Crabbe admired the offerings, migrating between lavishly decorated red-and-green cupcakes at P’s Sweet Treats to buying handmade stuffed dolls from craftswoman Joyce Titley, she said they were all a testament to the legacy of the late legislator, who died in October at age 70.

Premier Dr. Orlando Smith, who opened the ceremony with his remarks, agreed, saying, “As long as this event continues, everybody will remember the name of Honourable Delores Christopher.”

He praised her involvement in the “development of small businesses and craft and culture in the BVI.”

Already by Friday, Ms. Crabbe was excited by the turnout, as well as the increased number of vendors, which was up from 25 last year.

Yesterday City Manager Janis Brathwaite-Edwards con- firmed Ms. Crabbe’s hopes, de- scribing the Saturday turnout as “extremely large” and adding that organisers had to turn away some potential vendors at the last minute on Friday.

“We usually have a large turnout on Saturday, but this year it was even larger than usual,” she said. “Last year, because of the hurricanes, we did not extend it to its full capacity. This year, we were almost beyond capacity. It has grown tremendously.”

Early on Friday, the vendors had mixed reports of sales, but they were all optimistic about their chances as the weekend continued.

Cheryl Maggiacomo has sold her handmade dolls, Christmas ornaments and batik quilts from her booth almost since the event began in 1999 as Christmas on Main Street.

“I will say this: Everything here is handmade,” she said, gesturing to her products, adding that sales hadn’t been huge by Friday afternoon but “it’s not about quantity; it’s about quality. If someone comes and buys two olls and shows appreciation for what I do, that gives me a lot of contentment.”

She added that it “wouldn’t be fair to compare” the event this year to 2017, because it was so soon after Hurricane Irma. She herself, like many of the vendors, took that year off.

But in general, Ms. Maggiacomo, who learned from her sister and has been crafting since she was 6 years old, said the focus of the market has shifted, and the products and the clientele have changed.

“They’re more jaded,” she said. “I try to up my game by adding plastic, and people think it’s made in China.”

Although she was a first-time seller, Francine Noel had similar goals. A teacher and a sales representative for a line of United States-based products including dietary supplements and meal-replacement bars, she said she wasn’t focused on raking in the sales but simply familiarising the public with her products.

“I believe people need to pay attention what they eat,” she said as she gave one patron a free vitamin sample. “It’s good for me to be here because it gives me the chance to let people know about healthier stuff.”

Delight Charles planned to attend both nights, not only to shop, but to support her daughter’s dance troupe, Saturday Fusion, which performed on Saturday.

She said she planned to attend again with a group of other parents who used the opportunity to shop and check out the rest of the offerings.

Ms. Charles’ girls were excited to be back dancing after a year of setbacks.

“They didn’t get to dance at last year’s Festival parade, so we’re happy this event gives them the opportunity perform,” she said.

Affording space to lesser known performers and vendors was one of the main reasons Ms. Christopher began the event years ago, according to Ms. Crabbe.

“She really was a cultural icon; she really was all about supporting businesses and any interested businessperson: She wanted to give them the oppor- tunity,” she said.

A major goal of the event is also to convey to consumers that that they can shop close to home.

“You don’t have to go overseas,” Ms. Crabbe said. “You can get things here.”

Education and Culture Minister Myron Walwyn, who spoke at the opening ceremony on Friday alongside Communications and Works Minister Mark Vanterpool, echoed those remarks.

“This event has been an economic stimulus for the Road Town area for the past 20 years,” he said. “It has been able to bring out and create new entrepreneurs over the time and even for those existing entrepreneurs, they’re able to showcase their offerings and get the support from the community.”

The Pier Park lighting marked the 30th year the Lions Club of Tortola has illuminated the trees.

President Carvin Malone, during his remarks last Thursday after flipping the switch, alluded to last year when the club scheduled the lighting to coincide with the Tree of Hands gifting day. He said this year was still a time to “restore hope” to families around the territory.

“When we were here last year, it was one in which we were still going over cars and trees, and trying to make a way,” he said. “We have to restore hope in terms of all those persons who are still without roofs, all those persons who are still without homes, and make sure the Christmas season is one which they can look forward to and one which they can celebrate and celebrate with joy.”

Bishop John Cline, who co- sponsored the event with the BVI Christian Council, implored the crowds to remember to keep a Christmas spirit of togetherness despite the “politically tense atmosphere.” “Let’s, as the BVI, enjoy this season,” he said.