Sports > CIS under-13 to defend title at Bahamas tourney

CIS under-13 to defend title at Bahamas tourney

END_OF_DOCUMENT_TOKEN_TO_BE_REPLACED 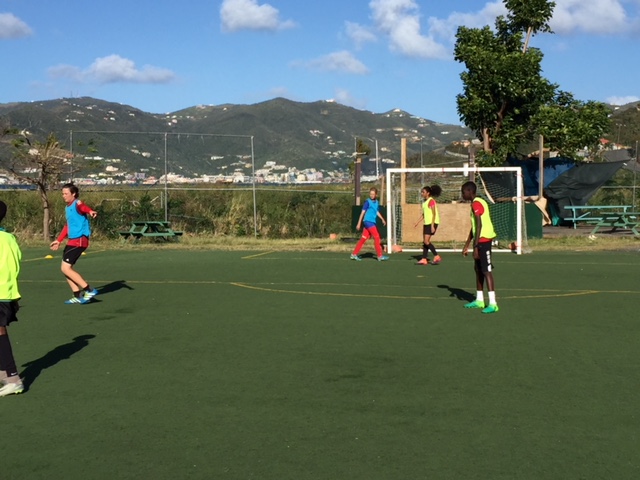 Both boys and girls practise at Cedar International School in preparation for this weekend’s tournament in the Bahamas. CIS is the defending under-13 boys champions. Photo: PROVIDED

This weekend the CIS under-13 boys squad will compete against teams from the region including Cayman, Turks and Caicos, Jamaica and the Bahamas.

CIS is the defending champion of the tournament.

“Those teams will certainly have set their sights on Cedar given Cedar’s remarkable championship winning drive at last year’s tournament with the team not losing a single match on the way to the title,” according to a statement from CIS.

Hurricanes Irma and Maria almost derailed CIS from competing in the tournament this year, but organisers decided it was best to attend.

“It was the right thing to do for the kids who train so hard,” said Walter Reich. “Sacrifices would need to be made by all involved, including parents, and the call went out to try to secure competitive try-out sessions.  The tournament starts with tryouts because its important for the kids to know that hard work, perseverance, conduct and team play are all required to make the team.”

To remain on the team, players must be committed to training and work hard both on field and in the classroom or their spot is jeopardy.

“Overall, it was great to see so many tryout and to see a couple of youngsters make the team,” Mr. Reich said. “We encourage those who aren’t successful to keep putting in the practice so that they might make the next tournament team.”

Tryouts for the team began in early January with practices three times a week organised by CIS Coach John Reilly. The competition was fierce.

Mr. Reilly and Assistant Coach Alessandro Palladino led 90-minute training sessions and were impressed with the focus, desire and development of each of the players over the two months.

“We are taking a young team this year” said Mr. Reilly. “The only returning player from last year’s championship side team is the team’s captain Michael Palladino. [His] experience and leadership will be invaluable to the young squad. On the positive side, most of the players will have the opportunity to represent Cedar in this tournament for the next two years, which bodes well for future tournaments.”

The coach added that the tournament is special because of the bonds that are formed between the players and the host families in the Bahamas.

“In some cases lasting friendships are formed as evidenced from previous tournaments,” the coach said. “The players also are responsible for representing themselves, their families, their school and the BVI in a proper and respectful way — it’s a true learning experience that extends well beyond the football pitch.”

Cedar was unable to send a girls’ team to the tournament for the third year in a row. However, they will be represented on the girls’ side by Darci Reich and Ariel Mohamed, who both agreed to play for teams on the girls side of the draw who require numbers.

“Both girls played last year and expressed a strong interest in returning to Bahamas to play and renew friendships,” said Mr. Palladino. “Their commitment is evident in their two to three times a week practice schedule.”

Mr. Reilly is optimistic that the girls programme will continue to grow.

“I am confident that we will be able to resume sending a girls team next year based on the girls I am seeing training at the school,” said the coach.

Last Saturday, the players helped organise a football fundraiser that was held at CIS.

“The players really embraced the idea of trying to raise money to help minimize the cost of travelling to the Bahamas” said Mr. Alessandro. “We view it as part of the tournament experience and we were proud of their enthusiasm and dedication as they came up with some entertaining football themed ways to raise money.”