Transformation is the buzzword for Public Service Week 2018, which got under way on Monday with an opening ceremony in front of the Central Administration Building. “Our grandchildren will look …

END_OF_DOCUMENT_TOKEN_TO_BE_REPLACED 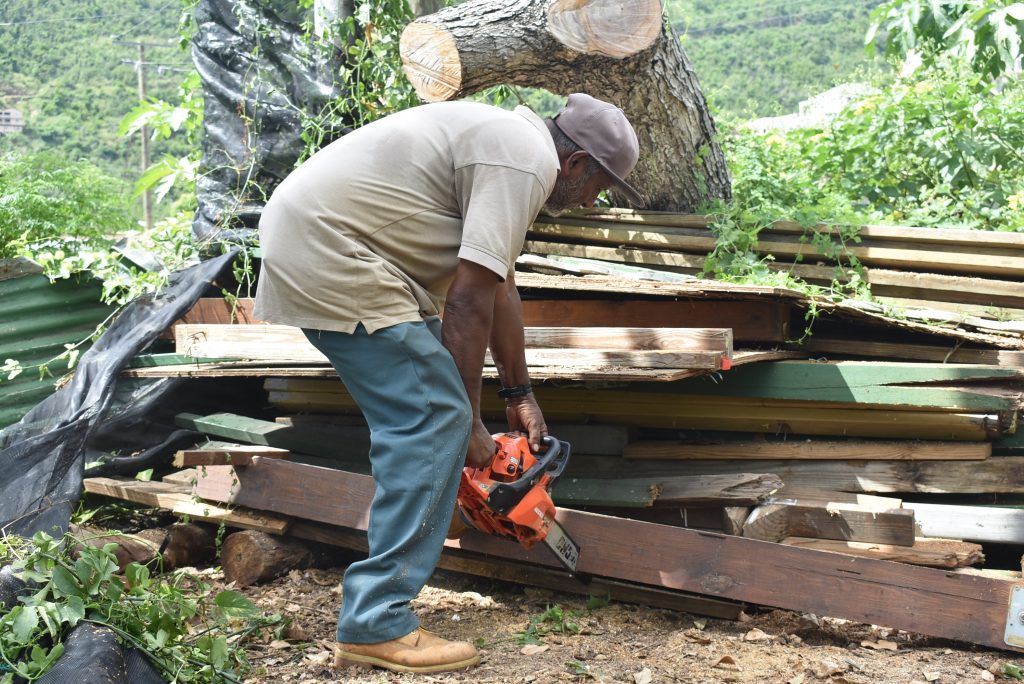 A public officer takes a chainsaw to scrap wood at the J.R. O’Neal Botanic Gardens on Tuesday morning as part of Public Service Week.The cleanup was among various community service initiatives held during the observance. (Photo: HEMANT LUTAWAN)

Transformation is the buzzword for Public Service Week 2018, which got under way on Monday with an opening ceremony in front of the Central Administration Building.

“Our grandchildren will look at the annals of what took place after hurricanes Irma and Maria,” Deputy Governor David Archer said during the event. “The photos will look like you and you. We transform not for ourselves but for the generations to come.”

The ceremony also marked the launch of new initiatives that will focus on the health and well-being of government workers as part of a larger public-service reform that Cabinet approved last year.

One is the relaunch of the Civil Service Association, a group of public officers who advocate for the needs of their colleagues. Geraldine Ritter-Freeman, deputy secretary in the Premier’s Office,said that there’s a need to revive the association, which has existed in some form since the 1960s but went dormant in recent years.

“Many new government workers are not familiar with the CSA and its mandates, according to Ms.Ritter-Freeman. “A lot of persons have lost confidence in the Civil Service Association for whatever reason,” added the deputy secretary, who spoke on the topic as a member of the committee for Public Service Week, which this year is being chaired by the Premier’s Office.

“It becomes difficult to challenge, to lobby. If you don’t have the numbers behind you, then you can’t push hard enough.”

Ms.Ritter-Freeman and others are working to gauge interest and spread the word about the association, she said, and after that they will set a timeline to elect officers. The deputy secretary also said the association will act as an intermediary in dispute resolution between managers and employees; give legal or general advice; and work to obtain group discounts for public officers on services such as airline flights and insurance.

“We cannot underestimate the power of the public service as a whole as a unified body,” she said. “There are so many things we can do together that we cannot do apart.”

The CSA relaunch is just one new initiative coinciding with
Public Service Week. The members of the Joint Workplace Health and Safety Oversight Committee also formally took office during the Monday ceremony.

The Workplace Health and Safety Policy, passed by Cabinet
in April, is already being implemented, according to
Health and Safety Coordinator Dawn Leonard. It will be rolled out over a two-year period and is aimed at bringing the public service in line with the Labour Code,she said.

Committee members will conduct accident investigations and provide advice on health and safety measures to the deputy governor and government’s human resources director.

To kick off the policy is today’s Last Man Standing
Competition, where public officers will face off in a variety of fitness challenges,including sit-ups, jumping jacks and tyre flips, and vie for prizes in the Queen Elizabeth
II Park.

The governor, deputy governor and the director of HR will all be in the mix. “As health and safety coordinator, this is a big step,” Ms. Leonard said. “Really and truly we can’t see the public service transforming without increasing the issues of health, safety and welfare of public officers.”

Additionally, 156 public officers were honoured for celebrating 35, 25 or 10 years of service to the government.

Clyde Lettsome, a former permanent secretary in the ministry of natural resources and labour, delivered the keynote address. To illustrate the indispensability of public servants, he offered the example of the Land Registry.

“The land registry is a small department, but that small department can cripple the BVI economy overnight if it does not function,” he said, adding that the 2017 hurricanes illustrated the importance of public officers. “Who but you can we look to TO? maintain law and order, to teach our children to care for our sick, to ensure we have roads to drive on, to ensure we have water and electricity?”

The recognition of the public officers will continue through the week. Tuesday saw public officers venturing out into the community, including to the J.R. O’Neal Botanic Gardens to prepare for its upcoming opening by clearing debris, weeding, and painting benches and tables. Yesterday’s schedule included Wacky Dress Day, a dominoes competition, and a panel discussion where officers discussed issues of concern to their colleagues.
Tomorrow includes more community service, including helping with the handover of headquarters of Fire and Rescue Services, and helping sort, catalogue and transport library books to Virgin Gorda.

On Monday, Governor Gus Jaspert, who also joined a team on Tuesday helping out at the botanic gardens, illustrated why public officers were motivating to assist in the community. “We get to do the most amazing thing,” he said. “When we get up in the morning, we go to improve people’s lives.”