For years, the Public Works Department on Jost Van Dyke has dumped dirt and other waste on the shores of the salt pond at White Bay, according to Wendell Callwood, …

END_OF_DOCUMENT_TOKEN_TO_BE_REPLACED 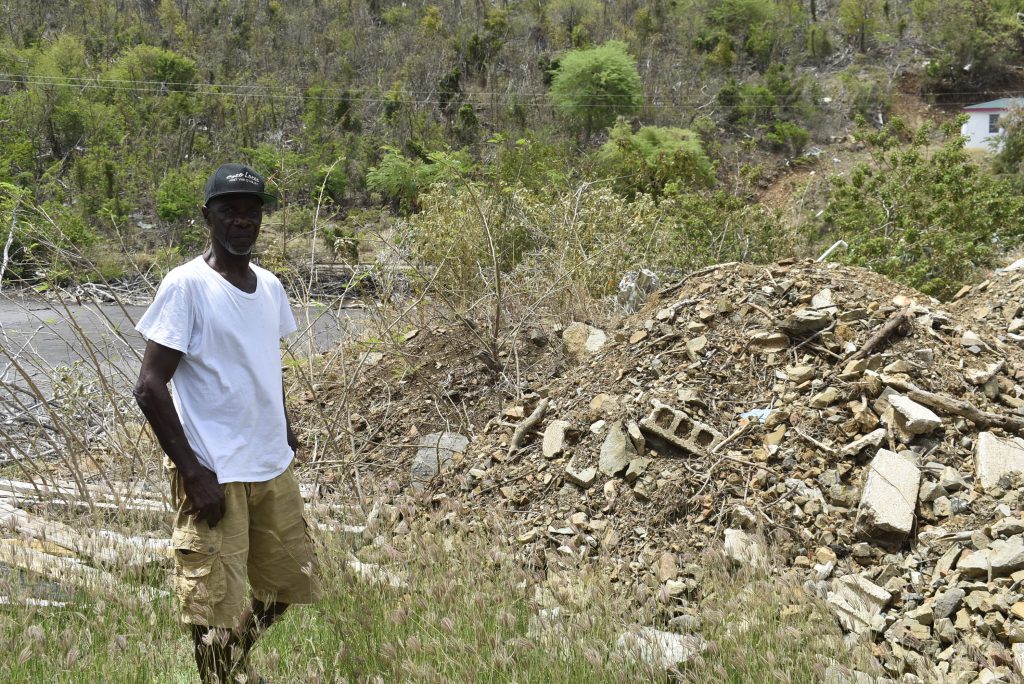 The mounds of dirt and rock pictured above at the White Bay salt pond came from recent road work on Jost Van Dyke, according to Wendell Callwood, above. But he said they are piled upon debris that has been dumped over the course of about eight years, he said.

For years, the Public Works Department on Jost Van Dyke has dumped dirt and other waste on the shores of the salt pond at White Bay, according to Wendell Callwood, who owns the nearby bar Coco Loco.

Now, the PWD has begun cleaning and widening the road connecting Great Harbour to White Bay, and it is once again depositing the resulting debris into mounds of dirt and rock on the pond’s shores, a few feet from the edge of the water.

Mr. Callwood, who was born and raised on the island, has urged the department to stop dropping waste by the salt pond, as the brackish water could overflow and seep into White Bay and taint the beaches’ blue water, discouraging the tourist traffic Mr. Callwood and other businesses there depend on.

According to Mr. Callwood, his concerns have gone largely unheeded.

“I grew up in White Bay my whole life: … Now it’s an eyesore,” Mr. Callwood said of the pond.

PWD Director Jeremy Hodge said yesterday that PWD staff have been depositing the debris from the roadworks on the bank of the pond because three people who own land in the area have requested to use the dirt for a project of their own.

Though Mr. Hodge had previously asked PWD workers to move the debris to a different spot, the staff were “met with some levels of hostility” by one of the landowners, which placed Mr. Hodge in a bind, as he would have had to contact the police if he were to further push the workers to transport the waste, he said.

While property owners on JVD do occasionally reuse dirt, he added, properly disposing of such debris on the island has historically posed challenges, and shipping it to Tortola on a barge remains the easiest option.

However, Mr. Hodge added, “If it is a matter of concern, before we get into the heavier part of the hurricane season … we can arrange to have it moved to a different area.”

Mr. Callwood also has called attention to the issue in a JVD WhatsApp group that includes government ministers, but so far they haven’t intervened, he said.

Attempts to reach District Two representative Mitch Turnbull, who represents the island but was in a House of Assembly meeting on Tuesday, were unsuccessful.

In 2007, the National Parks Trust, in conjunction with several other government agencies, drafted the National Protected Areas Systems Plan, which aims “to ensure the sustainable use of the system of protected areas while fulfilling its conservation objectives and contributing to the economic development of the territory.”

The plan classifies wetlands as areas that serve “an important role in the protection and survival of wildlife, where the protection of wildlife habitat is essential to the well-being of nationally or locally important wild plants … and where specific human manipulation and active intervention are required to ensure maintenance of such habitats.”

The plan, however, does not outline any regulations people must follow to preserve the quality of VI wetlands, though it states that the “further development system planning process” will be accomplished by preparing management materials for “critical resources” including wetlands.

In 2005, the Town and Country Planning Department prepared a draft Wetlands Policy and Plan, but the document was never adopted.

As the owner of a White Bay beach bar, Mr. Callwood said the waters’ health directly impacts his livelihood, and he considers the cleanliness of the pond a personal issue.

A drive around the pond makes clear that the recent debris from the PWD road project is not the only waste affecting the water.

Discarded car parts and a derelict boat dot the pond’s bank, and cardboard floats in the still water.

As a child growing up on the island, Mr. Callwood recalls a pond where mangroves would grow quickly after a storm and birds would gather.

He has petitioned the PWD to help him clean the pond, claiming that with a crew to assist him he could have the job done in a matter of weeks.

But the department, he said, never took him up on the offer.

“It could be so beautiful,” he said. “Tourists come and could look at the ducks.”