The Commission of Inquiry called House of Assembly Clerk Phyllis Evans to testify on July 14, asking her why incomplete applications for pandemic aid were accepted, how ministers decide who …

END_OF_DOCUMENT_TOKEN_TO_BE_REPLACED 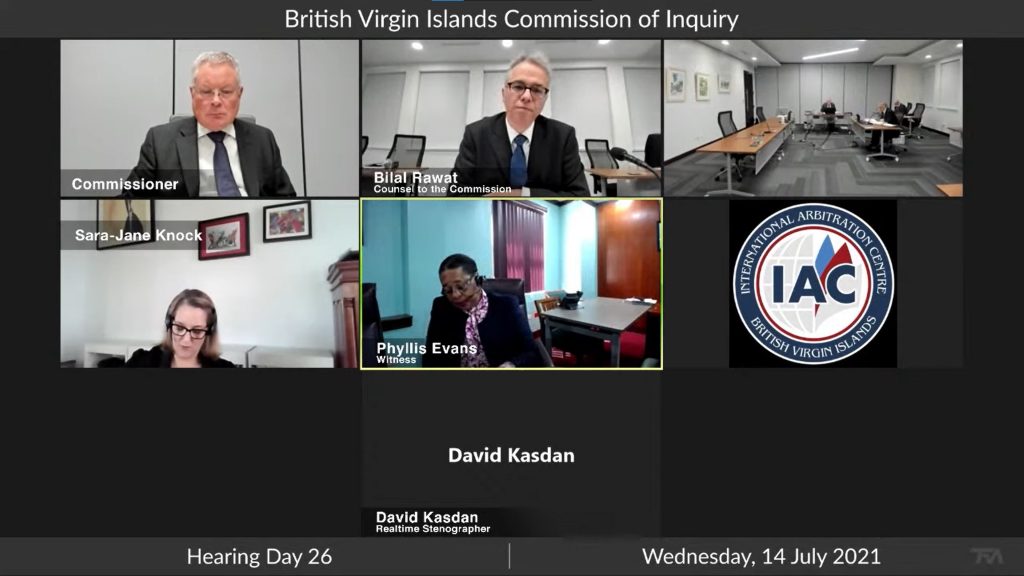 House of Assembly Clerk Phyllis Evans gave evidence to the Commission of Inquiry last week about the assistance grant programme, saying her office was overwhelmed with applications for financial aid at the beginning of the pandemic. (Screenshot: COI/YOUTUBE)

The Commission of Inquiry called House of Assembly Clerk Phyllis Evans to testify on July 14, asking her why incomplete applications for pandemic aid were accepted, how ministers decide who should get funding, and related questions about the HOA assistance grant programme.

Ms. Evans explained that the grant programme has existed for more than 20 years to help people in districts throughout the territory, but its purpose changed prior to her appointment in 2009.

COI Counsel Bilal Rawat asked what steps Ms. Evans takes after ministers send her applications they would like to see approved.

She replied that after her office receives them, she makes any necessary amendments and signs off on them. Other employees, including her deputy in the Accounts Unit, also look for any errors, she said.

“And do you have a role in considering the merits of the application?” Mr. Rawat asked.

Asked if she considers the substance of the application, Ms. Evans noted that HOA members, not her, meet with applicants.

Mr. Rawat directed Ms. Evans to Internal Auditor Dorea Corea’s assessment of the assistance grant programme in her audit reports from May 2009 — shortly after Ms. Evans became clerk — and March 2011.

“The audit team is at a loss as to what necessitated the evolution of this programme … from its original intent of facilitating minor district projects to one whereby elected members are solely responsible for deciding who is granted funds from the programme,” he read from the 2009 report, which covered 2006 to 2008.

He asked Ms. Evans if she was aware of this original intent when she took over, but she said she wasn’t told when she first joined the office.

She added that she only found out years later that the money was meant for district projects, and that the intent changed between 2003 and 2007.

“And was it, as far as you were told, a gradual change over time, or was there a decision made that it would go from minor district projects to something a bit wider in its ambit?” Mr. Rawat asked.

“No, I was not told that, and neither did I ask the question,” she said.

One recommendation the internal auditor made was for government to consider transferring the money that would have been spent through the assistance grants to established entities.

This would create better transparency and consistency for awarding funds, the report stated. The report also recommended scaling down the budget.

“Was there a reason why you disagreed with that recommendation?” Mr. Rawat asked in reference to the official management response Ms. Evans sent concerning the internal auditor’s recommendations.

Ms. Evans said she sought input for her official response to the audit report during an informal meeting of the House. She added that she couldn’t remember any further details.

Another recommendation by the internal auditor was to have an independent body revise the guidelines members use for approval and “eliminate any inconsistencies which may exist.”

“It’s further recommended that such guidelines be formally adopted by Cabinet to better regulate the use of this subhead in the long term,” Mr. Rawat read.

Management’s official response to the audit, Ms. Evans said, was a commitment to seek corrective action within four months.

But turning to the 2011 audit report, Mr. Rawat said none of the 10 recommendations were carried out.

He read, “The clerk noted that attempts were made to address the weaknesses discovered in the current guidelines. However, this was not accomplished due to lack of cooperation from some members of the Assembly.”

He asked why members didn’t cooperate.

Ms. Evans said she found “something” in Cabinet minutes about members’ reasons for not following through.

“I can’t tell you in details, but, yes, I did find something,” she said.

The same recommendations were made in the 2011 audit report, but Ms. Evans said they again weren’t followed.

Mr. Rawat said the report shared “concern” over the fact that the HOA clerk, who also serves as the accounting officer, “lacks the necessary authority to make expenditure from this subhead without express consent of the elected representative.”

“What’s essentially being suggested in these audit reports is that the clerk to the House of Assembly is in a difficult position because you don’t have the final word in terms of deciding whether or not monies will be paid out,” he said. “The approval comes from the member of the House. Your role is to check that there are the necessary documents. Do you see the same tension in what you’re being asked to do in terms of managing this process?”

“I would say yes,” she replied.

Ms. Evans added that she raised the issue with previous administrations of being responsible for these expenditures but having limited control over how they’re spent.

She said she also raised the issue of guideline reform in an “informal” HOA meeting, but members never set a meeting date to address it.

Beyond ensuring members don’t exceed their annual allotment and the forms are properly filled out, Ms. Evans said she doesn’t have much regulatory power.

Some members may have overspent in previous years, Mr. Rawat interpreted from the 2009 report, which reviewed disbursements from 2006 to 2008.

Though he noted that the timeframe in question was before Ms. Evan’s appointment, he asked what happens if a member goes over the limit.

The clerk said no major overspending has happened since she started.

Acting Financial Secretary Jeremiah Frett testified on July 14 that Cabinet could give a schedule of additional provisions for the assistance grant programme to clear any shortfall, but Ms. Evans said she ensures that everyone sticks to their limits. She then said in a few instances, additional sums were given to members at the year’s end.

“Was that a one off?” Mr. Rawat asked. “I suppose it’s difficult to say because, obviously, 2020 was a very different year, a very abnormal year — but it didn’t stay at that same level?”

The commission also asked about the pandemic assistance lambasted by earlier this month by Ms. Corea, the internal auditor.

Ms. Evans said she wasn’t at all involved in establishing the programme or deciding its criteria.

However, she agreed with the internal auditor that the programme structure allowed HOA members “to be directly involved in the awarding of grants to their constituents.”

He then asked if Ms. Evans’ office dealt with any difficulties processing applications at that time.

She replied that the office was extremely short-staffed.

“People were frustrated,” she said. “Members were hollering. I was the only person going through each application. I couldn’t see everything. We were just very overwhelmed with the situations.”

Ms. Evans said she didn’t know the exact percentages, but she was aware of some incomplete applications.

“I know that, yes, there were persons that did not have the evidence,” she said. “It was a trying time for us here in the BVI and persons who were desperate. I tried to assist the best I could with giving the resources for members and to assist persons who were really in dire need of assistance.”

She continued, “The people were hurting, and I tried my best to be humane and to ensure that persons got assistance.”

Mr. Rawat asked, “Were the members pressing you to process the applications as quickly as possible?”

“Yes, they were, because the applicants and the constituents — I guess everybody — was just on the brink of collapsing: no job, can’t pay their rent and stuff like that,” she said.

But she added that she did point out to HOA members when evidence was missing, and she did return some applications to be completed properly.

In previous COI hearings, some elected officials complained about a lack of orientation upon taking office.

Mr. Rawat asked the clerk if she offers an introductory package to new members covering issues like the assistance grants, Standing Orders, how the House operates, and such.

Ms. Evans said she typically does, but claimed she was unable to do so for this administration because of “many setbacks” that she did not explain in detail.