Less than two months after the Virgin Islands Party came to power in the February 2019 general election, all six private-sector members of the Climate Change Trust Fund board received …

END_OF_DOCUMENT_TOKEN_TO_BE_REPLACED 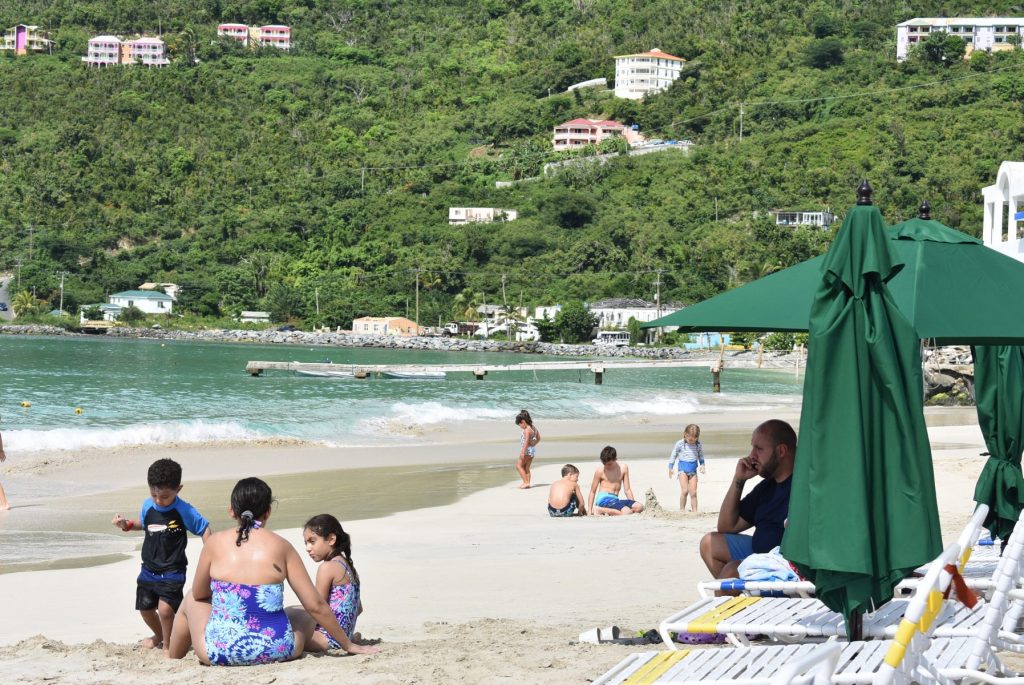 Though visitors to the Virgin Islands have for years been paying a $10 levy that was meant to help finance the Climate Change Trust Fund, that money never came through before the fund’s board was ousted in early 2019, former chairman Edward Childs told the Commission of Inquiry on Monday. (File photo: CLAIRE SHEFCHIK)

Less than two months after the Virgin Islands Party came to power in the February 2019 general election, all six private-sector members of the Climate Change Trust Fund board received a letter from newly appointed Premier Andrew Fahie.

“In keeping with our mandate, it is this government’s intention to restructure the composition of membership on each board inclusive of youth involvement on each board,” the letter stated, according to evidence then-board chairman Edward Childs gave the Commission of Inquiry on Monday. “A new policy attaching term limits on board membership to coincide with the term of the sitting government is now being implemented. Hence, in view of the foregone, we are seeking your cooperation in voluntarily tendering your resignation from the Climate Change Trust Fund board by Thursday, April 11, 2019.”

The unpaid board members, however, were uncomfortable with the request, Mr. Childs told the COI.

Since their appointment in July 2017, they had been working hard to establish the trust and enable it to pursue domestic and international funding for major environmental initiatives, and they worried that the collective loss of their experience could be detrimental to the body’s future success, according to the former chairman.

So instead of resigning, they wrote back and asked the premier for a meeting, Mr. Childs said, adding that they never received a response.

But not long afterward, a public announcement from the Cabinet Office confirmed the members’ termination from the board.

The Climate Change Trust Fund Act 2015 requires the fund to be sustained with environmental fees and grants and managed by an independent board.

Mr. Childs, a real estate agent, told the COI that he showed interest in the board shortly after the act passed and applied for a position. He was later appointed to a three-year term in July 2017, and six other non-government members were appointed as well.

COI Counsel Bilal Rawat asked if the appointments were designed to expire on a rolling basis — not all at the same time. Mr. Childs answered in the affirmative.

Between his appointment and his dismissal in April 2019, he recalled the board meeting about 15 times, he testified.

He added that the trust was designed to support a variety of public and private “green” projects by securing grants and other funding from regional and international entities.

Mr. Rawat asked what work the board did during its tenure.

Mr. Childs explained that members worked on launching the new trust by approving logos and websites, but most importantly they worked with a consultant to develop an operations manual.

This document, he said, was key to affirming the trust’s independence as a necessary step for pursuing international funding.

However, he said the board didn’t receive the funding it expected from the government in order to establish a secretariat and otherwise help lay the groundwork to carry out its mission.

“There was obviously going to be some seed money which came through a particular tax, but that would only be seed money and supporting some of the basics for running the trust,” he said. “But yes: It was very clear that if you wanted for the trust to be successful, we would be applying to international bodies.”

The Customs Department began collecting a $10 environmental levy from visitors in 2017.

“The intention was that the Climate Change Trust Fund would receive 40 percent of those funds in order to give it annually a degree of seed money in order to run the secretariat and really to underpin the whole operation,” he said, adding that this money was key to helping the trust hire a CEO, seek outside investments, and become fully operational.

“Although there was mention within each about the levy and where it would go, it didn’t actually direct that that’s what would happen,” he explained.

Mr. Childs said government did not provide the trust with regular updates on its efforts to set up a proper avenue for allocating money from the levy to the trust, but the two public officers on the board kept members appraised of the progress.

In December 2018, he added, Cabinet decided a way forward, but the decision never passed the House of Assembly.

“So we never actually benefited from those funds,” Mr. Childs said.

In the February 2019 general election, the VIP government came to power with Mr. Fahie at the helm as premier. Shortly thereafter, responsibility for the Climate Change Trust Fund was shifted from the Ministry of Natural Resources, Labour and Immigration to the Premier’s Office. Mr. Childs said he received the letter requesting his resignation on April 5, 2019, as did the other private-sector board members.

The letter, he said, was his first contact with any new government ministers regarding his position with the trust. He added that he wasn’t given any other explanation for being encouraged to voluntarily resign.

“When I received my letter, I assumed it was just me that had it, so I did reach out to other board members, and that’s when I realised everybody received the same letter,” he said, noting that all the non-government members then met and discussed how to proceed.

None of them resigned, he noted.

“We decided at the time we were concerned that a lot of effort had gone into getting the trust fund to where it was at that point,” he said, pointing especially to the new operations manual. “Individually, while if any of us had to come off the board, it wouldn’t really matter. But for all of us to come off the board at one stage, you’re effectively starting again with the trust fund, and we felt that would be an issue.”

They therefore wrote to the premier requesting a meeting to share their progress and concerns about a mass departure, noting that interfering with the trust’s independence could affect applying to international bodies for funding, he said.

But they received no response, and they soon learned through a public announcement that Cabinet had decided to revoke their membership despite legislation that seemed to indicate that Cabinet did not have the authority to unilaterally eliminate the board.

Mr. Fahie said at the time that Cabinet revoked the memberships because of a new policy limiting board terms to mirror the “lifespan” of the government in power.

The Climate Change Trust Fund Act, however, does not appear to give Cabinet that power.

Under the law, the minister responsible for the trust fund can revoke a board member’s appointment for one of five reasons: misconduct; lack of attendance; an undeclared conflict of interest; not fulfilling the conditions of an appointment; or acting detrimentally against the trust.

Mr. Childs said none of those five reasons applied to him — or, to his knowledge, any of the other members.

To date, government has not announced new board members.

Mr. Rawat asked if members of the board contributed their own funds to start the account and “get things going,” which Mr. Childs confirmed.

He added that he believes it possible that the board is now inactive considering that no new appointments have been announced.

Mr. Rawat asked if the Virgin Islands had been “leading the field” in terms of getting climate change financing and building a dedicated trust.

“Yeah, and in the process of particularly when we were meeting with various experts in the field, … I understand from them that this was the very first act of this nature within the Caribbean that had been passed, and we would be the first board obviously to be working in this particular field where we could be raising money and investing it,” Mr. Childs replied.

But he said he believes progress mostly came to a standstill after the board left, while neighbouring countries like Antigua moved forward.

However, he noted that he believes the environmental levy continues to raise funding.

Mr. Rawat asked if there is an inactive account collecting the levy monies, but Mr. Childs said he didn’t know because the account is separate from the trust’s.

He added that the trust did not raise any “substantive” money on its own from July 2017 to February 2019.