On Tuesday, Attorney General Dawn Smith and Opposition Member Julian Fraser appeared before the Commission of Inquiry and fielded questions about the challenges to good governance in the Virgin Islands. …

END_OF_DOCUMENT_TOKEN_TO_BE_REPLACED 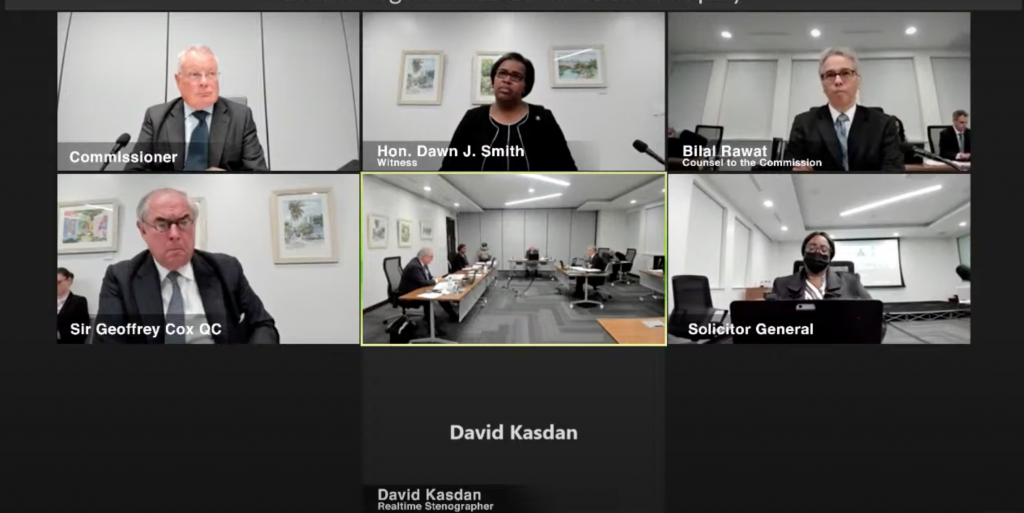 While appearing before the Commission of Inquiry on Tuesday, Attorney General Dawn Smith detailed the issues facing her office. (Screenshot: COI)

On Tuesday, Attorney General Dawn Smith and Opposition Member Julian Fraser appeared before the Commission of Inquiry and fielded questions about the challenges to good governance in the Virgin Islands.

Their testimonies differed in scope, with Ms. Smith detailing the impediments facing the AG’s Chambers and Mr. Fraser taking aim at the governmental system as a whole.

Though both lodged criticisms of the current system, they also suggested ideas for improvement with Ms. Smith calling for more funding and staffing for the AG’s Chambers and Mr. Fraser suggesting a wholesale restructuring of government.

During their testimonies on Tuesday, the questions asked by Commissioner Sir Gary Hickinbottom and COI Counsel Bilal Rawat were informed by the position statements Ms. Smith and Mr. Fraser had submitted previously, which the COI published on Monday.

The pair were the first to appear as the inquiry turned to a new topic on Tuesday: “governance and law enforcement and justice.”

The body will question other officials on the same areas in the coming days.

Ms. Smith testified first on Tuesday, describing for more than an hour and a half the intricacies of the AG’s position, including how she navigates varying roles as a non-voting member of the House of Assembly and Cabinet and as the senior legal advisor to the government.

The tension that arises from juggling these different duties is just a part of the job, and with the necessary care it is manageable, Ms. Smith said.

But the biggest difficulty she experiences in guiding the passage of new laws is the lack of any cohesive “policy agenda” put forth by government, she said.

“Government on the campaign trail creates a manifesto and makes promises when they are elected. They’re elected to carry out the things that are in the manifesto,” she said, adding, “What I would expect as a citizen, what I hanker for as attorney general, is a comprehensive roadmap that comes out of that manifesto that then gets translated into policy. … The AG has not seen that sort of roadmap and policy agenda.”

Another source of frustration for Ms. Smith is inadequate staffing of the AG’s Chambers, a problem she said is rooted in a lack of sufficient funding allocated to the agency.

Currently, just nine of the 23 positions in the chambers are filled, she told the commission.

“To a large extent, it is money driven,” Ms. Smith said of the vacancies.

It is hard to attract lawyers when there are so many financial services firms willing to pay a higher salary than the AG can offer, she explained.

Ms. Smith also conceded some frustration at the fact that government doesn’t direct more money into the AG’s budget even though it routinely pays large sums to legal consultants.

“Why can’t the government figure out what is the correct level … at which to pay counsel?” Ms. Smith asked. “It bothers me greatly. It’s an intractable problem that I cannot understand because I’m satisfied it is not that the government does not want to pay for legal services.”

She clarified that she does not wholly object to government’s hiring of legal consultants when certain expertise is needed, but she believes that some of those funds could be reallocated to her chambers.

The reasoning behind the budgeting process for the AG also remains somewhat of a mystery to Ms. Smith, she said.

Explaining how her budget is approved, Ms. Smith said she first prepares a budget that she likened to a “wish list,” which is then sent to the Deputy Governor’s Office.

“I’m not quite sure why this happens, but apparently they can subtract” from the funding, Ms. Smith said.

She added that the budget is then sent to the Ministry of Finance, “which actually prepares the budget document” that goes to the House of Assembly.

The AG’s budget is then debated during the closed-door Standing Finance Committee deliberations before eventually being voted on by the House and assented to by the governor, Ms. Smith said.

Although Ms. Smith considers the government as a whole to be her “client,” she said that her responsibilities as AG vary widely.

In the Cabinet, Ms. Smith said her job in large part is to ensure that the members’ decisions are lawful and “made in a lawful way.”

She assumes an advisory position in the House, guiding the legislators when questions arise regarding, for example, “parliamentary matters: … what they can do, what they can’t do,” she said.

Opposition members are also free to approach the AG for advice, although they often appear uncomfortable doing so, she explained.

And Ms. Smith said her job frequently puts her in a tough spot, and she sometimes has to tell the most powerful people in the territory things they don’t want to hear.

Nevertheless, she added, she accepts the tension as part of the job. “You don’t have a choice. …The issue comes up, it’s not always going to favour all … parties,” Ms. Smith said.

“But my responsibility is to ensure that I give correct advice and properly informed advice, and there’s really nothing else to do.”

Ms. Smith added that one of the most important “safeguards” to her independence as a lawyer is her “security of tenure.”

Mr. Fraser’s testimony dealt largely with concerns expressed in his position statement that power in the VI government is vested too heavily in the premier and that other issues present impediments to productive law-making.

Sir Gary and Mr. Rawat, meanwhile, asked him about his ideas to restructure the government for a better distribution of power.

“There is no diversity in the House … and it makes for bad policies, bad legislation,” Mr. Fraser said. “There is no need to negotiate, no need to come to an agreement on anything. It’s only at the whims and fancy, I should say, of the premier.”

Mr. Rawat asked about a section in Mr. Fraser’s position statement that claims, “The current system imposes legal dictatorship powers on our premier.”

Elaborating further, Mr. Fraser in his position statement explained that the premier, along with four House members who are nominated by the premier and appointed by the governor, compose all voting members of the Cabinet.

The premier also has the power to fire any of these voting members for any reason, Mr. Fraser noted.

“Simply put, he dictates what is or is not government’s policies,” Mr. Fraser wrote.

To balance out this power, Mr. Fraser suggested implementing a “coalition government.”

Under this new form of government, he told Mr. Rawat, the VI would have a Senate and a House of Representatives, with nine district representatives in the House.

Though Mr. Rawat appeared familiar with the details of Mr. Fraser’s alternative plan, it was not outlined in his position statement submitted to the COI.

In place of the current at-large system, the territory would be divided into three regions with a representative elected for each one, while a fourth at-large candidate would take on the role of speaker.

These representatives would not belong to any of the political parties already vying for district seats, but they could form their own party if they chose, Mr. Fraser said.

Asked what he sees as the major flaws of the current at-large system, Mr. Fraser responded, “Purpose. I haven’t been able to determine the purpose. … The only purpose I see in that at-large system is to create diversity. Which it didn’t.”

Mr. Fraser’s proposed senate, meanwhile, would consist of seven members including a president and two senators from each of the three regions.

Because they are often chaired by a government minister, he said, other committee members often are left without meaningful power.

As a result, he explained, a report rarely emerges from a committee that does not reflect the views of the minister chairing the body.

“That’s a basic no-no,” he said. “You’re not going to find that too many places that you travel.”