Since May, the Commission of Inquiry has been meeting with public officers, political operatives, and elected leaders to probe allegations of potential corruption and serious dishonesty in the Virgin Islands.  …

END_OF_DOCUMENT_TOKEN_TO_BE_REPLACED 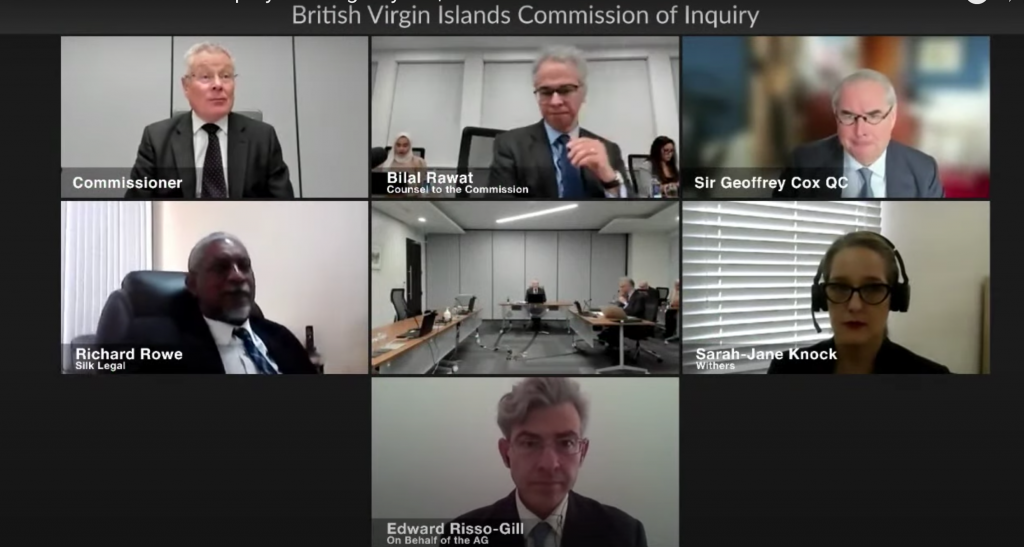 After more than 50 hearings, Commissioner of Inquiry Sir Gary Hickinbottom announced on Friday that he will not be hearing any more oral evidence except for a few special circumstances, such as the potential cross-examining of Governor John Rankin and former Governor Gus Jaspert. (Screenshot: COI)

Since May, the Commission of Inquiry has been meeting with public officers, political operatives, and elected leaders to probe allegations of potential corruption and serious dishonesty in the Virgin Islands.

Commissioner Sir Gary Hickinbottom and COI Counsel Bilal Rawat have heard evidence about a wide swath of topics including deficiencies in the public service, audits blasting unsuccessful projects, and a lack of transparency in awarding contracts and spending public funds.

The hearings frequently have been contentious, with social media sometimes alighting with anger as testimony shed light on some of the territory’s governance problems.

But now, this portion of the COI is over, as Sir Gary said Friday that he is not collecting any more evidence except for a few special cases.

With this stretch of the COI over, Sir Gary has allotted roughly a month to finish up a handful of outstanding evidentiary matters, including the cross-examination of Governor John Rankin and maybe former Governor Gus Jaspert next month by a representative of the attorney general.

As these matters are settled, Sir Gary will begin writing his report, which he is scheduled to submit to the governor in January along with his recommendations for the way forward.

Setting out the next stage of the inquiry on Friday morning, Sir Gary said Attorney General Dawn Smith should move quickly on her application to cross-examine Mr. Rankin.

By the end of the day, he said, Ms. Smith should notify the COI about the availability of her counsel for the period of Nov. 15-26.

He added that she should notify the COI by Tuesday about the topics on which she would like to question Mr. Rankin — and Mr. Jaspert if she decides to question him as well.

By Nov. 3, he said, she should submit a prepared bundle for that hearing.

Additionally, by tomorrow afternoon, Ms. Smith should comply with all outstanding disclosure requests that the COI has made and provide a copy of the auditor general’s file on the Blunder Bay project in Virgin Gorda, Sir Gary said.

Also by tomorrow, both the AG and attorneys from Silk Legal, who have been representing members of the House of Assembly during the inquiry, are required to “file written submissions in relation to the scope of section 13 of the Register of Interests Act,” and to submit a list of matters on which they wish to make closing submissions, according to a Friday COI order. However, Sir Gary warned that “the opportunity” to make closing submissions “should not be taken as a mechanism to adduce fresh evidence.”

The AG and Silk Legal were given a deadline of Nov. 12 to lodge those submissions.

Silk Legal was also in- to file any written submissions related to the Sea Cows Bay Harbour Development Project by Tuesday afternoon, and Ms. Smith was given a Nov. 5 deadline to submit an affidavit about the public service budget as well as a 15-page-maximum submission on her own role in governance, Sir Gary said.

Sir Gary also gave instructions for how the lawyers should make submissions regarding “personally identifiable information.”

The issue arose in relation to hearings about the radar barges government procured as border protection during the pandemic, and it led to the delay of two of the COI’s transcripts, Sir Gary said.

According to a Friday COI order, “If PII or any other ground for nondisclosure is maintained over either the bundle on radar barges or the transcripts … concerning radar barges, then a properly formulated application with evidenced reasons for each suggested redaction shall be made to the COI.”

If those applications are not made by Nov. 5, Sir Gary said he will proceed on the basis that all of that material can be made public.

Sir Gary gave the same instructions in regard to potential PII or other non-disclosure issues relating to “documents annexed to the elected Ministers Response to the Governor’s Position Statement.”

The commissioner concluded the hearing by thanking all who participated or helped execute the inquiry, including the stenography and audio-visual team, the International Arbitration Centre management, and “the public officers who have borne the brunt of the work in responding to COI requests for documents and other information.”

Lastly, he thanked the residents of the VI for their support.

“This COI was established because of their public welfare, and it is being conducted in their interests,” Sir Gary said, adding, “The support and the kindness that I have received and the COI team have received … has been vital.”