The day after Premier Andrew Fahie’s arrest in Miami, Governor John Rankin said Friday morning that he had decided to expedite the release of the Commission of Inquiry report, which …

END_OF_DOCUMENT_TOKEN_TO_BE_REPLACED 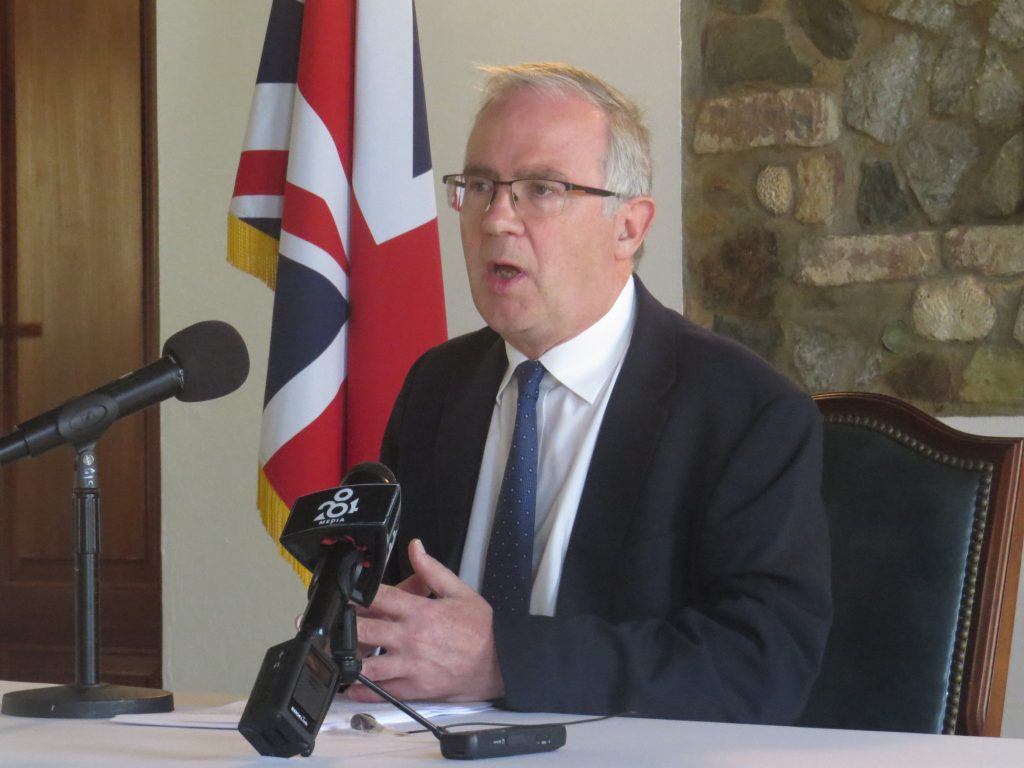 Governor John Rankin announced at a press conference this morning that Commission of Inquiry Commissioner Sir Gary Hickinbottom had officially recommended the United Kingdom take over administration of the Virgin Islands government for a period of two years. (Photo: DANA KAMPA)

The day after Premier Andrew Fahie’s arrest in Miami, Governor John Rankin said Friday morning that he had decided to expedite the release of the Commission of Inquiry report, which recommends that the United Kingdom take direct control of the Virgin Islands in place of the elected government for two years.

The governor claimed the premier’s arrest was not a result of the COI report, but in light of the news breaking Thursday morning he felt the VI public should know about the recommendations and be able to read the full report now instead of in June as initially planned.

“The commissioner concludes that with limited exceptions, governance in areas under the control of government ministers is, at best, very poor, with principles such as openness and transparency not simply absent, but positively shunned,” Mr. Rankin said. “Proper procedures, checks and balances are absent, or patently inadequate, or ignored or bypassed. He states that the evidence in this regard is overwhelming and extends to almost all areas of government.”

The 946-page report was released [FULL REPORT] shortly after the press conference.

“These concerns were put to me by individuals across the community — including senior business leaders, public officers, community groups, media and others,” Mr. Jaspert said at the time. “Cumulatively, they paint a worrisome picture.”

Mr. Rankin said Friday that he received the COI’s report on April 4, and he originally intended to make the report public in June after discussing it with VI party leaders and UK officials in May.

However, after United States authorities arrested Mr. Fahie — as well as BVI Ports Authority Managing Director Oleanvine Maynard and her son Kadeem Maynard — he decided to act sooner. He said he was made aware of he arrest yesterday.

The COI reported finding evidence that corruption, abuse of office or other serious dishonesty may have taken place in the territory’s government in recent years, Mr. Rankin said.

To help rectify the situation, Sir Gary recommended the dissolution of the House of Assembly and cessation of ministerial government “for an initial period of two years,” Mr. Rankin said.

These two recommendations are part of four main ones the COI made, in addition to 45 others on good governance.

In the elected government’s place, the governor would assume leadership, with assistance from an advisory council.

“The advisory council should reflect BVI civic society, and the commissioner also urges the governor to draw primarily on the pool of public service talent in the BVI to advise and aid him,” Mr. Rankin said.

He added that Sir Gary recommended reinstating VI ministerial government “as soon as practicable” after the suspension.

The COI also recommended an “early and speedy” review of the VI Constitution with the goal of “ensuring a Constitution that will enable the people of the BVI to meet their aspirations including those in respect of self-government within the context of a modern democracy,” the governor said.

Sir Gary’s other two main recommendations include the “curtailment of the open-ended discretionary powers held by public officials including Cabinet” and “a series of audits and investigations which may give rise in due course to further steps, including in relation to criminal investigations.”

Sir Gary also said recently enacted good-governance measures like the Whistleblower Act and Integrity in Public Life Act have been largely reactive to the work of the COI, despite the premier’s claims otherwise, and he expressed strong scepticism that such measures would be actually implemented, according to Mr. Rankin.

The governor made clear that no final decisions have been made about a UK takeover or other COI recommendations.

Amanda Milling, the UK minister responsible for the overseas territories, is scheduled to return to the VI after her visit last month, he said.

She, the VI government, opposition members, and “other key individuals” will be involved in discussions about how to proceed, according to the governor.

When responding to questions from the press, the governor did not give a timeline for making such decisions. If the government is not suspended, an election is due next year.

Despite Sir Gary’s strong condemnation of apparent corruption in the public service, police force and other areas of government, the governor expressed optimism that the VI would get through this difficult time.

“As governor, I pledge that the best interests of the people of BVI will continue to be my overriding concern, ensuring transparent, honest and open governance in accordance with the rule of law to strengthen the foundations of the British Virgin Islands,” he said. “I believe that the COI report is a vital and hugely valuable contribution towards the achievement of better governance in the BVI in the interest of the people of the territory, and I commend it to you.”

Acting Premier Dr. Natalio “Sowande” Wheatley, who assumed the role when Mr. Fahie went to Miami on Monday for a cruise conference, said in a statement Friday that he doesn’t believe a UK takeover is necessary.

He added that he had received a copy of the report yesterday.

Of the recommended suspension, he said, “I know that this will be of great concern to many persons, and I too am very concerned about this recommendation.”

Dr. Wheatley said he had written to the governor and UK ministers about what the step would mean for democracy in the VI.

“The report makes a number of recommendations aimed at reforming and strengthening the systems of government in the Virgin Islands,” he said. “In my view, this can be achieved without the partial or full suspension of the Constitution in which direct rule would apply.”

He continued, “There is much more to do, but the good working relationship between the governor and the ministers of Cabinet is at the heart of the UK BVI modern partnership in which there can be closer cooperation to achieve the standards we collectively desire.”

“As this situation unfolds, we must remain focused on the business of the territory and committed to the work of the public service,” he said. “Be assured that I am working closely with His Excellency the governor, the acting premier and permanent secretaries to ensure that there is no disruption to the continuity of the public service.”

He added that he would call an extraordinary meeting of the public service on Monday.