When Queen’s Counsel Sir Geoffrey Cox sat before the Commission of Inquiry last week to cross-examine Governor John Rankin, he bore down on a central question explored previously by the …

END_OF_DOCUMENT_TOKEN_TO_BE_REPLACED 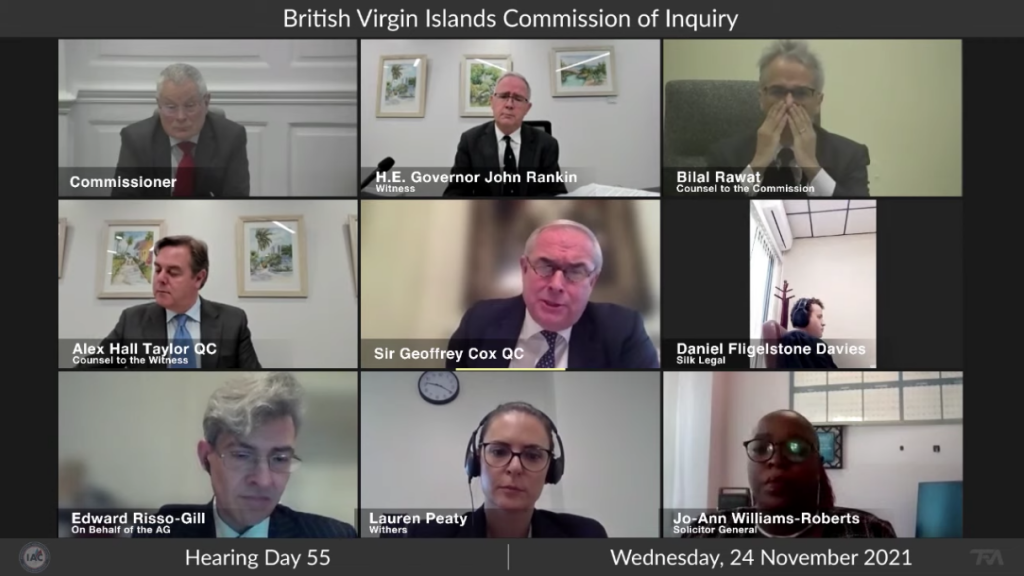 During a cross-examination of Governor John Rankin on Nov. 24, Queen’s Counsel Sir Geoffrey Cox rehashed some of the Commission of Inquiry’s earlier questions exploring whether the governor fulfills the mandate of helping the Virgin Islands become an independent state. (Screenshot: COI)

When Queen’s Counsel Sir Geoffrey Cox sat before the Commission of Inquiry last week to cross-examine Governor John Rankin, he bore down on a central question explored previously by the COI: Does the governor’s current role promote or delay the Virgin Islands’ development into an independent nation?

Over more than two hours of questioning, Sir Geoffrey — the government’s legal counsel during the COI — asked Mr. Rankin how he balances the interests of the United Kingdom with those of the VI and advocates for good governance without overstepping boundaries.

The most contentious moment, though, may have come when he asked if the governor should be more involved in setting the government’s policy agenda.

While Mr. Rankin accepted that his office could do more to help the public service, he rejected any suggestion that a lack of policy planning on the part of his office was responsible for government failings highlighted during the COI.

“I don’t think that is a sufficient or clear explanation of the concerns which are being investigated by this commission,” Mr. Rankin said.

He also broadly defended the right of the governor to publicly refute government decisions that he feels are unlawful or damaging to the territory.

Announcing inquiries like the one under way is one of the few powers that the governor has to combat perceived governance issues, Mr. Rankin said, and he defended the decision by his predecessor, Gus Jaspert, to call the COI.

“It is right and the duty and the obligation of the governor to speak up and try to prevent that feeling of unjust treatment or abuse from taking place,” Mr. Rankin said.

After beginning the cross-examination by asking Mr. Rankin about his professional background and how he came to be selected as governor, Sir Geoffrey then asked him about how he navigates the “conflicts of interest” a governor might encounter.

Mr. Rankin offered an example he has previously presented to the COI: urging the government to comply with a UK parliamentary decision that requires all overseas territories to have publicly accessible registers by 2023.

While Mr. Rankin recognises that this is not a popular proposition in the VI, he still has argued to the ministers that it is in the VI’s long-term interest to adopt public registers, as failure to do so could lead to the VI being blacklisted under anti-money laundering laws, he said.

Sir Geoffrey then asked Mr. Rankin how he interprets article 73 of Charter of the United Nations, which says that member states responsible for other territories must “recognise the principle that the interests of the inhabitants of these territories are paramount.”

When read as a whole, Mr. Rankin said, he takes the article to mean that he is obligated not only to promote the VI’s self-governance but to protect its residents against abuse and unjust treatment, which could require him to clash with the elected government.

“That sometimes means giving the government advice or taking actions which the government may not be in agreement with but because I believe they’re in order to ensure just treatment and protection against abuses,” Mr. Rankin said.

He cited Mr. Jaspert’s decision to call the COI as one such example.

Accountability Sir Geoffrey then asked about another source of possible tension.

Although a central role of the governor is to “command the trust” of the elected government, he noted, the governor is not subject to the same pressure of winning votes as elected ministers. Consequently, the governor may move slower on some issues than the central government or not “appreciate the democratic pressure” some politicians face, which can cause “a central friction,” Sir Geoffrey suggested.

The governor admitted that he does not face the same “local accountability” as his colleagues in the central government, but he said he is still bound by the VI’s Constitution and laws; can be judicially reviewed or questioned in Cabinet; and can face scrutiny from an independent press. Should Mr. Rankin seriously breach his responsibilities or misbehave, the premier also has the power to report this behaviour to the UK, which might issue a reprimand, Mr. Rankin said.

“I, with respect, would not accept a position that I am not accountable in certain ways to the people of the British Virgin Islands,” he added.

While Sir Geoffrey did not question Mr. Rankin about whether it is lawful for the premier to chair Cabinet meetings when the governor is absent — COI Counsel Bilal Rawat had questioned Mr. Rankin about this topic during an Oct. 19 hearing — he did ask whether enlisting the acting governor or deputy governor to chair the meetings in these circumstances harms the relationship between the governor and elected politicians.

“What sort of message does it send … when a clear and express provision of the Constitution that provides for their premier to chair the Cabinet is consistently and permanently ignored?” Sir Geoffrey asked.

Mr. Rankin did not directly answer the question, and he conceded that he did not know why it became established practice after the 2007 Constitution was passed.

After Sir Geoffrey again pressed the governor about the signal given when the premier is barred from chairing Cabinet, Mr. Rankin said that he understands the counsel’s point, and that there may be circumstances going forward in which it may be appropriate for the premier to chair Cabinet.

Perhaps the most contentious portion of the hearing came when Sir Geoffrey and Mr. Rankin sparred over the governor’s obligation to help set a policy agenda for the elected government, and whether the governor’s purported failure to do so has led to government decisions that have drawn scrutiny during the COI.

Sir Geoffrey suggested that the civil service — led by the Governor’s Office — consistently fails to present to newly elected ministers, some of whom have never held office before, their options for fulfilling policy commitments.

This, Sir Geoffrey suggested, makes it hard for politicians to carry out the manifestos with which they were elected.

But Mr. Rankin appeared to refute the assertion that it is his office’s responsibility to set out such a political road map, and he claimed that it is instead the public service’s obligation to help the central government govern.

“It’s for Cabinet ministers to determine their policy [and] for [the] public service to assist them in executing that policy,” Mr. Rankin said.

Though he admitted that the “policy planning function of the public service could be further developed,” and that he welcomes this development, he said he does not accept that this lack of capacity is responsible for some of the government decisions investigated by the inquiry. Although he considered that, as Sir Geoffrey put to him, it would be helpful if ministers were told in detail what policy options were available to them, he argued that “it is not a failure of policy planning which explains all the issues which have been considered here.”

After concluding his questioning, Sir Geoffrey, who had recently come under fire in the British press for advising the government during the COI while in the UK House of Commons, left the hearing for unexplained reasons, and Edward Risso-Gill, who was also representing attorney general Dawn Smith, took his spot but did not further question the governor.