Wednesday afternoon, the commission of inquiry released the transcript from the first session of its first hearing, during which it considered and ultimately approved Attorney General Dawn Smith’s application to …

END_OF_DOCUMENT_TOKEN_TO_BE_REPLACED 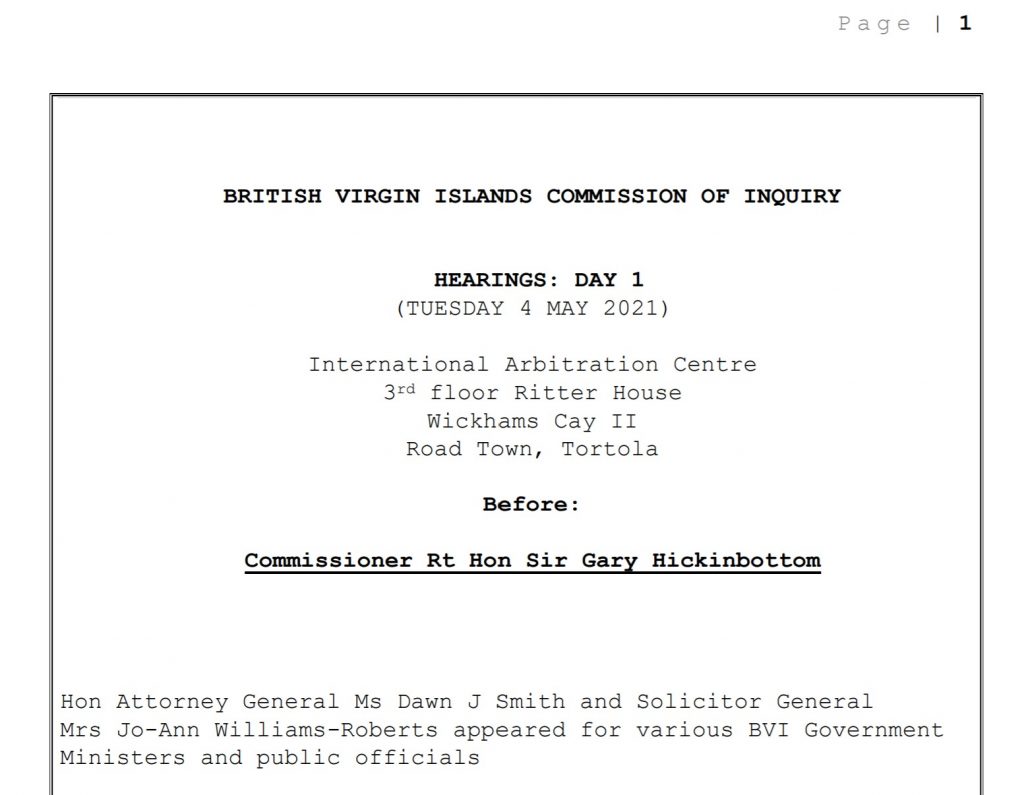 At the first Commission of Inquiry hearing held May 4, which was closed to the public, Attorney General Dawn Smith fielded several questions about her participation in upcoming hearings from Commissioner Sir Gary Hickinbottom and COI Counsel Bilal Rawat, according to the 78-page transcript, which appears to be unredacted. (Photo: PROVIDED)

Wednesday afternoon, the commission of inquiry released the transcript from the first session of its first hearing, during which it considered and ultimately approved Attorney General Dawn Smith’s application to participate in the inquiry as a representative of various government entities.

At the May 4 proceeding, which was closed to the public, Ms. Smith fielded several questions on her application from Commissioner Sir Gary Hickinbottom and COI Counsel Bilal Rawat, according to the 78-page transcript, which appears to be unredacted.

After that, Sir Gary determined that Ms. Smith or her representative is entitled to participate in the inquiry and should be able to represent public servants including ministers unless otherwise directed.

The AG, meanwhile, assured Sir Gary that her objective is to give the commission the greatest possible assistance in carrying out its corruption probe, according to the transcript, which is posted on the COI’s website.

Cabinet Secretary Sandra Ward was also scheduled to give evidence the same day in response to a summons issued April 23, but the transcript from her hearing had not been published as of Beacon press time on May 12.

Commission Secretary Steven Chandler told the Beacon on May 12 that the COI is currently awaiting submissions from the AG on whether she considers that any parts of the Ward transcript should be redacted prior to its publication on the COI website.

Last week, the commission reiterated previous promises to be as transparent as possible while conducting the proceedings.

The day after the first hearing, the COI issued a statement denying that Sir Gary wishes to hold the proceedings in “secret” and noting that transcripts likely would be published soon.

“This press notice has been issued to correct a misinterpretation that has arisen in the media’s reporting of the commissioner’s opening statement as to his decision to hold private hearings,” noted the May 5 statement, which did not identify the offending media outlets. “The suggestion in some media reporting that the commissioner wishes hearings to be in private or ‘secret’ has no foundation. It is his wish that each hearing is made public to the fullest extent. However, he is required to take into account the rights and obligations of those who appear before him.”

The commissioner previously had explained that the initial hearings would be held privately to deal with certain documents that governmental bodies provided to the commission.

“In respect of these documents, the attorney general has confirmed that the government reserves its position as regards its rights of privilege and confidentiality,” the May 5 statement noted. “These issues affect how such documents can be used and disclosed by the COI.”

In spite of these restrictions, however, Sir Gary intends to carry out the commission’s work in public whenever possible, according to the statement.

Following the hearing, Sir Gary invited Ms. Smith to submit reasons he should not publish the transcript of the hearing sessions, the statement explained.

“Public access to the transcripts will ensure transparency and avoid the misreporting of hearings,” the statement noted. “In respect of hearings in which there are no issues such as privilege and confidentiality, it is the commissioner’s intention that they be live-streamed.”

Also as of press time, no further information about any other hearings had been announced.

The commissioner is required to deliver a full report on his findings to Governor John Rankin by July or request a three-month extension.