Commissioner Sir Gary Hickinbottom put elected officials’ claims to be “champions of transparency” to the test last week, suggesting that they should have no objection to his Commission of Inquiry …

END_OF_DOCUMENT_TOKEN_TO_BE_REPLACED 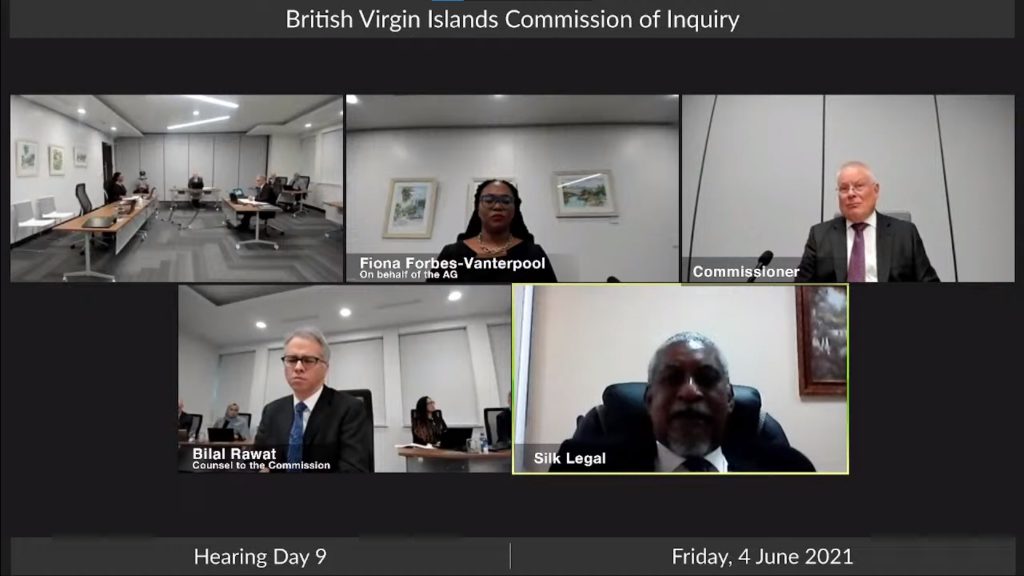 The livestreaming of Commission of Inquiry hearings continued on June 4 with debate on publicising information elected officials have disclosed to the Register of Interests upon taking office. (Screenshot: COI YOUTUBE)

Commissioner Sir Gary Hickinbottom put elected officials’ claims to be “champions of transparency” to the test last week, suggesting that they should have no objection to his Commission of Inquiry disclosing information from the Register of Interests to the public during the course of its work.

The commission held two hearings last week to nail down exactly what potentially sensitive documents it can use from government, particularly from the register and from Cabinet minutes.

The inquiry team noted that information typically held privately in the register likely would be made public during the investigation, barring objection from members of the House of Assembly.

Principal Crown Counsel Fiona Forbes-Vanterpool, instructed by Attorney General Dawn Smith, told the COI on June 4 that the decision is up to the commissioner, though she noted that disclosing information in the register generally goes against the legislature’s previous wishes.

Per the Register of Interests Act of 2006, members must declare their interests when taking office and every year afterward. The register, however, is closed to the public, though the House codified an exception in March to allow the COI to access documents from it.

Sir Gary said last week that the inquiry team had received multiple rounds of documents from the register, most recently on June 2.

It then sent a letter seeking input from the registrar and Ms. Smith about how the COI may use the documents.

Summarising Ms. Forbes-Vanterpool’s written submissions, Sir Gary said that once the registry documents were in the hands of the commission, it would be up to him to decide what information could be disclosed in the public’s interest, either through hearings or in his report.

He said the AG’s office had two requests: that confidential documents be either returned or destroyed, and that no copies be made or retained after they’ve served their purpose for the inquiry.

“The submissions are very clear, but I found them particularly helpful because I agreed with them,” Sir Gary said.

When it comes to public disclosures, he said, “It seems to me that I have to take into account the importance of transparency of the Commission of Inquiry hearings.”

The commissioner said that considering current members have described themselves as “champions of transparent government and champions of the transparency in the proceedings of the Commission of Inquiry,” he believed the registry information may be put into the public domain.

In an order published on June 4, Sir Gary instructed HOA members who will be summoned on June 14 — who have not yet been named — to lodge by June 9 any objections they have to the publication of information provided by the registrar of interests.

The COI did not indicate on its website whether any official had made an objection.

Sir Gary said on June 4 that otherwise his default position will be to make the information public.

Ms. Forbes-Vanterpool acknowledged that such decisions are up to the commissioner’s discretion but noted that the House has decided the register should generally remain confidential.

“In making such a determination, an important factor should be, we respectfully submit, the consideration of the perceived need for public disclosure against the clear intention of the legislature, as expressed in the act, that the register remain private save in, as I said, those limited circumstances,” she said.

Sir Gary said he agreed, but given members’ strong advocacy for transparency, he assumed they would have no personal objection.

“The balancing of the public interest is very easy, isn’t it, because the people whose confidentiality it is have no objection?” he surmised.

“Even if one goes back to the 2006 act, it must have always been in the contemplation of the legislature that, at least in certain defined circumstances, material held by the registrar of interests could be made public because a court order could direct that disclosure be made, for example,” Mr. Rawat said.

He added, “The COI team hopes to work with providers in as flexible a manner to ensure that the balance is struck between making sure that material that should not be aired publicly isn’t, but the scheduled hearings can proceed without disruption.”

The livestream of the June 2 hearing with Withersworldwide partner Hussein Haeri, appearing on behalf of the attorney general, dealt with Cabinet documents. It was terminated early because of technical issues. But the remainder of the video was posted later that day after the Beacon’s print deadline.

Mr. Haeri and Sir Gary discussed whether audio recordings and other records of Cabinet proceedings could be disclosed to the COI, or if they could be withheld when there is a concern over issues such as national security.

“It has been clear from the outset that Cabinet decisions, some Cabinet decisions, would fall within the purview of the subject matter under inquiry in this COI,” Sir Gary said. “Indeed, in the initial hearings, a number of ministers referred to matters upon which Cabinet either made a decision or approved a decision that was the subject matter of questions put to them. Consequently, some months ago, letters of request were sent to the Cabinet secretary seeking production of various Cabinet documents. It is unnecessary to go through the long saga of correspondence passing to and fro in relation to those requests, although a long saga it has been.”

He explained the types of Cabinet documents requested: decisions, agendas, and records including finalised minutes, draft minutes, notes and some audio recordings.

Sir Gary noted that about three quarters of the Cabinet minutes from last year were never finalised and had been kept only as drafts — or, more often, just as notes by the Cabinet secretary. But he added that this situation is understandable given the circumstances of working amid the pandemic.

In an order dated June 2 and published on June 4, Sir Gary explicitly declined to rule out requesting electronic recordings of Cabinet meetings.

He also directed HOA members to, by June 4, identify any issues that they believe he should investigate.