Though the pandemic slowed down many things across the territory, it didn’t stop 146 students from graduating H. Lavity Stoutt Community College last week. For the first time ever, the …

END_OF_DOCUMENT_TOKEN_TO_BE_REPLACED 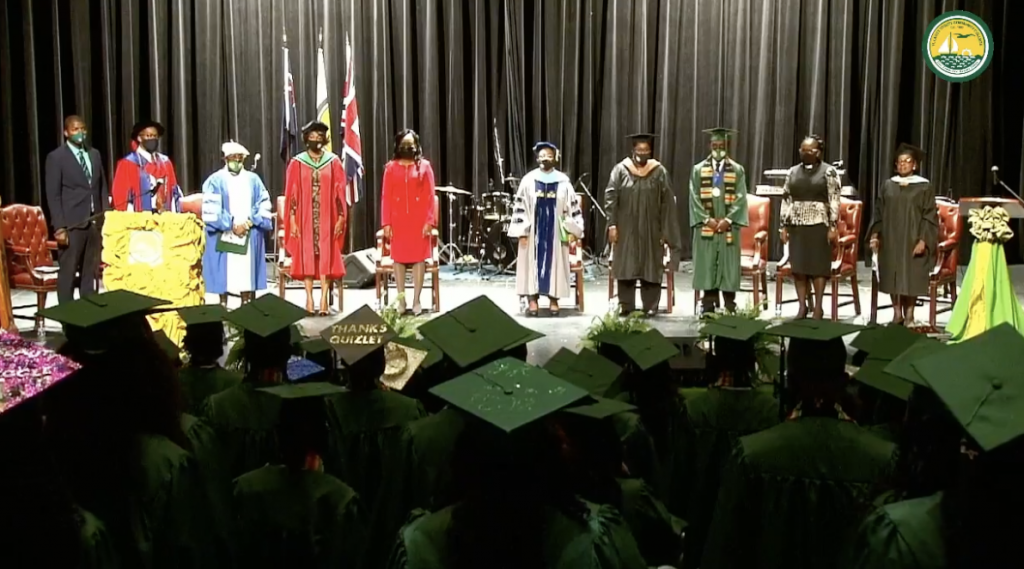 During two ceremonies last week at H. Lavity Stoutt Community College, graduates of the Class of 2021 were awarded their diplomas. (Photo: SCREENSHOT)

Though the pandemic slowed down many things across the territory, it didn’t stop 146 students from graduating H. Lavity Stoutt Community College last week.

For the first time ever, the college held two separate ceremonies: Graduates in business and computer studies were honoured on June 9, and graduates from the Workforce Training Division and humanities and science programmes celebrated last Thursday.

College President Dr. Richard Georges described the class — which included 90 women and 56 men — as being “talented, resourceful and irrepressible.”

“It is indeed a pleasure, an honour, and, more importantly, a gift, that we are able to gather here in this place and at this moment,” Dr. Georges said last Thursday. “Firstly, of course, as the completion of a major milestone in the lives of our graduates and secondly that we are blessed to be able to do so safely.”

The two small, private ceremonies were held at HLSCC’s Eileene L. Parsons Auditorium. At the beginning of each, the graduates were reminded of the protocols in place: They were to wear masks at all times, practise safe social distancing of at least three feet between non-family groupings, and remain in their assigned seats throughout the afternoon.

They were prohibited from taking group pictures inside the auditorium, and at the end they were dismissed in a staggered fashion to minimise crowding at the exits.

Areas outside were set up for graduates to take group pictures within a set timeframe. Dr. Georges was the first speaker last Thursday, and other speakers included Deputy Premier Dr. Natalio “Sowande” Wheatley and Dr. Sauda Smith.

Dr. Georges concluded his speech by reminding students that they each have the responsibility to “rise with purpose” and to make decisions that benefit others.

Dr. Wheatley commended the graduates for their “ability to see something through to the end” despite “exacerbating circumstances” such as the pan-demic and devastating hurricanes.

As a former educator, Dr. Wheatley said he is proud to see so many of his former students fulfill their ambitions.

The ceremony, which was livestreamed on Facebook, also included videos of alumni im- parting wisdom and advice to the graduating class.

Sinclair Flemming from the Class of 2008 advised the graduates to be true to themselves, to have lofty goals, and to treat people well.

“When one reads the theme for this year’s exercises — that is ‘From Recovery to Discovery’ — it is most likely you would consider the territory’s road to recovery post-Hurricane Irma and its current battle to navigate amidst the global pandemic to discover new avenues to survival and prosperity,” she said. “However, I have offered to take a different approach to this year’s theme as I address the matter of recovery and discovery of one’s self.”

She encouraged the graduates to ask themselves what life they would like to live, to take chances and to try new things.

At the June 9 ceremony, Junior Minister for Tourism Sharie de Castro was the keynote speaker.

She told the graduates that they now hold the “key” to success, and that they are at a crossroad.

“The next door you choose to walk through will most likely be solely your choice,” she said. “Come tomorrow you will wake up to the reality of what’s next. Your tomorrow begins today.”

The student respondent for the ceremony was Angelique Lettsome, the speaker of the Virgin Islands Youth Parliament.

Ms. Lettsome shared lessons that she learned during her time at the college.

“When you enter new spaces, learn to go with an open mind,” she advised.