Starting college is a major transition under normal circumstances, but as classes began Monday at H. Lavity Stoutt Community College in Paraquita Bay, students began finding out what higher education …

END_OF_DOCUMENT_TOKEN_TO_BE_REPLACED 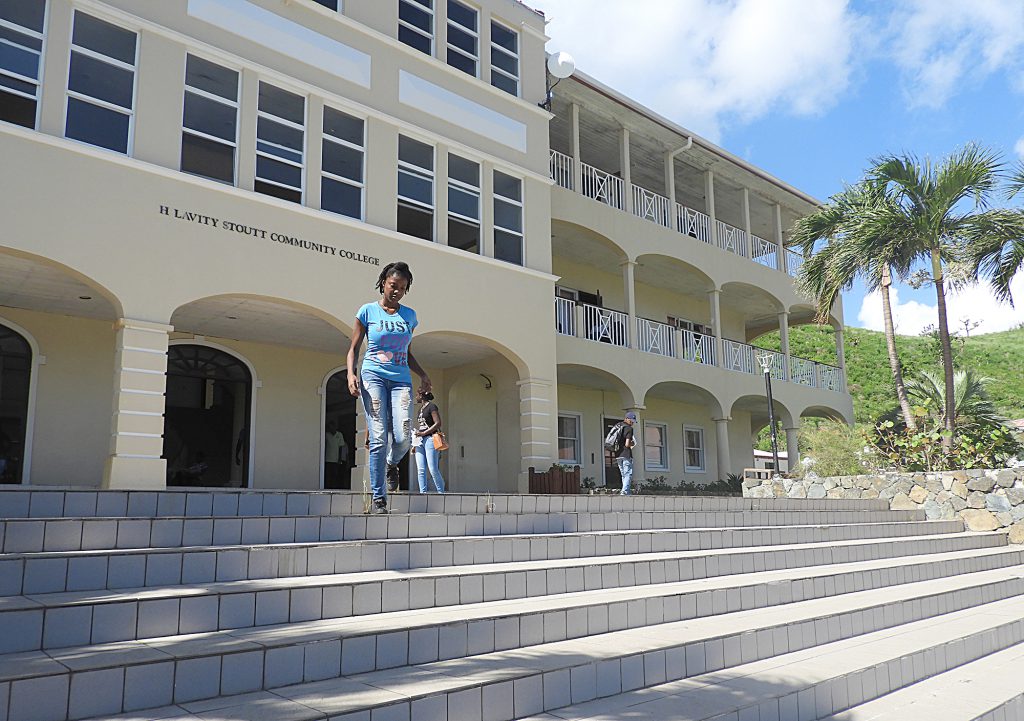 Students leave the lobby of HLSCC after registering for class. Photo: CLAIRE SHEFCHIK

“We’re doing everything the old-fashioned way,” said first-year architecture student Joshua Langford, explaining that the Marine Centre building has a working generator but the main building currently does not. “We are registering on paper. We can’t use the computers.”

Irma has left the school hurting for amenities.

“There’s nothing to eat around here. The cafeteria’s not open; there’s no vending machines,” said first-year business administration student Akisha Robinson. “Then we go home and do homework by flashlight.”

This semester, all classes are being held while there’s natural light enough to teach.

“Classes that would usually begin at 4:30 p.m. or later in the day will not be offered this semester, and students who are enrolled in these classes are encouraged to register for the same class earlier in the day if their schedules permit,” Education and Culture Minister Myron Walwyn explained in a recent statement.

HLSCC President Dr. Janet Smith added, “Students registered for classes offered after 4 p.m for which they are registered will be expected to complete the payment arrangements that were made.”

But since they already paid for the semester, they had few options but to go.

“A lot of students, they can’t get the classes they need to graduate,” she said. “Their lives are on hold.”

Ms. Robinson says she would have preferred the administration wait to open the college until next semester, when more of the infrastructure would be in place, night classes would be available, and students wouldn’t have to rearrange their lives so much.

In addition, since the Virgin Gorda campus was damaged, all of those students are attending classes at the Paraquita Bay campus.

The experience was an especially big transition for the first-year students, but Ms. Robinson said Hurricane Irma itself was a kind of learning experience.

“A lot of your friends and family may have moved away, so you have to become a lot more independent,” she said.

Still, Mr. Langford said he values the sense of normalcy and would rather be in school than doing anything else.

“It’s great to be around your peers, and take the pressure off all the other things we’re dealing with after Irma,” he said.

Attempts to reach HLSCC administators this week were not immediately successful.