Inquiry > Commission of Inquiry given access to register of interests

Commission of Inquiry given access to register of interests

Though the commissioner leading the United Kingdom’s corruption inquiry has the powers of a High Court judge when it comes to summoning witnesses and obtaining documents, Attorney General Dawn Smith …

END_OF_DOCUMENT_TOKEN_TO_BE_REPLACED 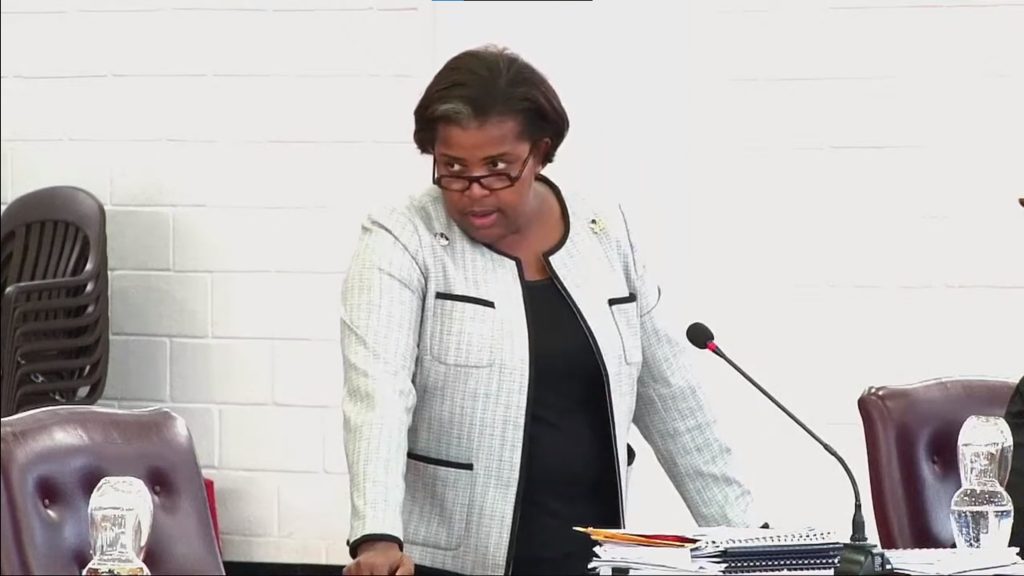 Attorney General Dawn Smith introduced the Register of Interests (Amendment) Act, 2021 in the House of Assembly last Thursday. The law will allow the commission of inquiry to examine records of HOA members’ financial interests to fulfil its mission to investigate potential corruption in the territory. The bill passed with no dissenting votes. (Screenshot: HOA)

Though the commissioner leading the United Kingdom’s corruption inquiry has the powers of a High Court judge when it comes to summoning witnesses and obtaining documents, Attorney General Dawn Smith said she hopes a bill passed last week in the House of Assembly will help make sure he doesn’t need to use those powers.

Ms. Smith introduced the Register of Interests (Amendment) Act, 2021 on March 4, and the HOA passed it later that day.

She said the legislation arose from Commission Secretary Steven Chandler’s request on Feb. 19 for the registrar of interests to provide copies of certain pages from the register.

“The requests also ask [HOA] members to provide information about their declarations,” Ms. Smith noted when presenting the bill.

Information about ministers’ business dealings and potential conflicts of interest are supposed to be declared in the register, which can only be viewed under limited circumstances.

The current Register of Interests Act stipulates that records can only be inspected “for the purposes of a criminal investigation; on an order of a court in any legal proceedings; and on the written request of a member,” she said.

The registrar also is not allowed to disclose information related to declarations in the register outside of those circumstances.

Ms. Smith noted that the COI’s request doesn’t fall under any of these exceptions, and members of the House don’t have the power to give consent for the registrar to provide copies of records to a third party.

“Members and the registrar cannot confidently comply fully with some or all of the commissioner’s requests without risk of breaching the act,” she added.

She noted Sir Gary’s judicial powers but said he hasn’t yet issued an official summons concerning the register.

“It is the government’s view that it is in the best interests of the Virgin Islands for requests to be complied with voluntarily, and to avoid the commissioner issuing a summons,” she said.

Ms. Smith said the proposed amendment would “provide an express statutory provision that would allow the register to be open to inspection on the written request of a commissioner of inquiry.”

However, the amendment doesn’t give total free rein.

“This is subject to the safeguard that the registrar is only to provide those parts of the register that in her opinion are strictly necessary to fulfil requests and upon such considerations and conditions as to preservation of confidentiality after their purpose has been exhausted as she shall deem appropriate,” Ms. Smith added.

Premier Andrew Fahie agreed that it is in the territory’s best interest to comply with the commissioner’s requests voluntarily and to work to avoid the “risk of inconsistent interpretations” of the register’s contents.

“We must be vigilant to protect the reputation of the Virgin Islands,” he said on March 4. “We must show that the Virgin Islands is not afraid of fair, impartial and transparent scrutiny and that we ourselves are committed to transparency and good governance.”

This doesn’t go so far as to open the books to the public, though, he said.

Mr. Fahie said the House decided when passing the act in 2006 that members should have exclusive knowledge of what the register contains, and that it’s up to the House to consider the accuracy of each member’s declarations.

“This principle cannot be waived or set aside by this honourable House,” he argued.

Opposition member Mark Vanterpool lent his support for the amendment as a move in the right direction for more transparent governance in the territory. He said members should be “keen to cooperate” with the investigation.

Mr. Penn noted that he does not support “fishing expeditions” seeking information outside of the proper process.

Health and Social Development Minister Carvin Malone said he supports the inquiry but also criticised what he described as a lack of specificity in its mandate, equating it to searching a house without a warrant.

Mr. Wheatley also offered support but cautioned that the commission of inquiry could be used to cause “great destruction.”

“If the intention is to create better systems and better management, an inquiry is a very good tool to help you achieve that,” Mr. Wheatley said. “But if the intention is not so pure, then you could do it the other way.”

Ms. Smith, who took up the post of attorney general about five months ago and has since been tasked with helping government fulfil information requests for the inquiry, thanked the HOA members for their support.

“Despite any reservations [HOA members] may have expressed, I note their very high regard for the rule of law, and I expect that they will all remain vigilant as to the conduct of the inquiry in its entirety to ensure for the people of the territory a just outcome,” she said.

Nine members voted in favour of the bill and four were absent when the vote was called.

Legislators passed the Register of Interests Act in May 2006, requiring the creation of a book where all HOA members would have to disclose their financial interests such as directorships, employment, clients, sponsorships, gifts received, overseas visits, land and shareholdings.

The act took effect in February 2008, but the select committee of HOA members necessary for establishing the register’s format wasn’t established until April 2016 despite repeated requests by current Registrar of Interests Victoreen Romney-Varlack. In the years between, the registrar labelled it a “blank book.”

“Members should be thankful that the register was not a public document, because if it were, there would be nothing to inspect,” she was recorded as saying in a 2012 Standing Finance Committee meeting.

Maintaining a register of interests was one of the key changes to come out of the territory’s 2007 Constitution.