Following the bombshell announcement last week that the United Kingdom will lead an independent investigation into potential corruption in the Virgin Islands, Governor Gus Jaspert and Commissioner Sir Gary Hickinbottom …

END_OF_DOCUMENT_TOKEN_TO_BE_REPLACED 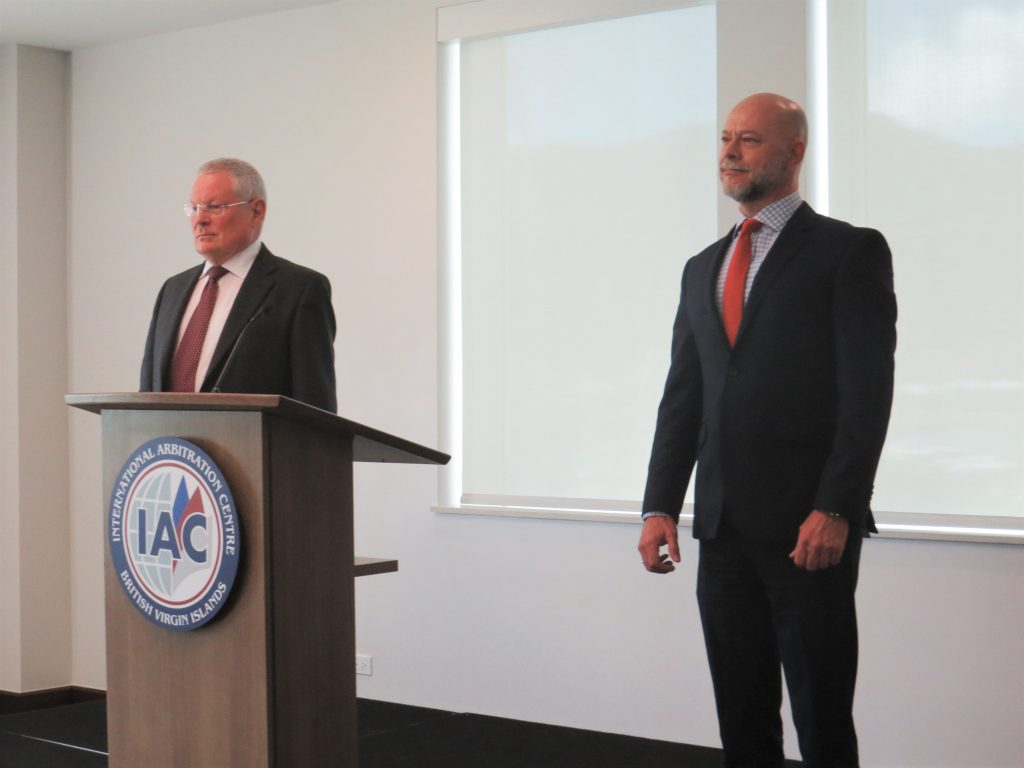 Speaking at a press conference on Jan. 22, Sir Gary Hickinbottom, left, laid out his timeline for conducting a United Kingdom-led investigation into possible corruption in the territory. The process, he said, starts with soliciting community input. At right is commission secretary Steven Chandler. (File photo: DANA KAMPA)

Following the bombshell announcement last week that the United Kingdom will lead an independent investigation into potential corruption in the Virgin Islands, Governor Gus Jaspert and Commissioner Sir Gary Hickinbottom held a press conference on Jan. 22 to lay out a six-month timeline and urge community members to come forward with relevant evidence.

The governor said he decided to launch the inquiry based upon complaints heard by multiple high-ranking officials in the territory and years of official reports suggesting various misconduct and governance failings.

“This was, without doubt, a truly difficult decision to make but a very necessary one based on the great number of concerns and allegations put to me by members of the community, the public service, the media, the businesses and others,” Mr. Jaspert said Friday.

He also thanked community members “who had the courage to come forward in their desire for wanting better for this territory.”

The governor also commended the VI’s oversight institutions for their efforts to follow up on such complaints but noted that they have struggled to gain access to information they need for their investigations.

In response to questions about why he announced the inquiry five days before his departure from office, Mr. Jaspert said he received “a number of serious concerns and allegations” from VI institutions about roadblocks in obtaining evidence.

“The decision I took was looking at the cumulative concerns that we have,” the governor said.

He later introduced Sir Gary, who arrived in the territory two weeks earlier and underwent a 14-day quarantine.

Sir Gary said he agreed to the appointment in hopes of benefiting those who live and work in the VI.

Though he explained that he has “considerable powers” in the position, he added that the “commission is not a court of law” and he is unable to bring charges himself.

“I am required to consider all of the information submitted, and make findings as to whether anyone in public service here may have been guilty of corruption, abuse of office, or other serious dishonesty in relation to their service,” he said. “If I conclude that there is nothing possibly amiss with the governance of these islands, I will say so and that will be the end of it.”

If he does find evidence of misconduct, Sir Gary can recommend criminal proceedings against individuals or suggest “tightening up the controls over administrative processes,” among other measures, he said.

In 2009, the Turks and Caicos Islands underwent a similar corruption inquiry that resulted in the temporary suspension of that UK territory’s constitution and the UK’s takeover of day-to-day governance for about three years.

Mr. Jaspert declined to comment on the possibility of the VI commission making a similar decision, saying it is up to the independent body to make its recommendations.

The commissioner also did not comment on the question.

Sir Gary said he will begin his investigation by organising his team, which includes secretary Steven Chandler.

A solicitor and counsel also will be appointed, he said.

Asked if any member of the team will be from the VI, Sir Gary did not explicitly answer the question but said it is important for the team to be “impartial, independent, and seen as such.”

Under Sir Gary’s instrument of appointment, he is required to deliver a report on his findings in six months.

“Given the nature of the concerns and that timeline, we must press forward with all speed,” he said.

The “crucial first step” is getting information to aid the investigation from community members, he said, adding that he will invite people he believes can help during the coming weeks.

Details for future in-person meeting dates on Tortola and the sister islands will be provided on the commission’s website at www.bvi.public-inquiry.uk.

Sir Gary added that provided information “will be treated in strictest confidence” if requested.

He also said that any evidence given to the commission is privileged and can’t be used in court against the witness.

“That does not of course mean that all witnesses are immune from subsequent criminal proceedings, if there are any, prompted by other evidence arising in the inquiry,” he said.

Based on the community-sourced information, the commission will then focus on summoning people to give testimony.

Sir Gary said he aims to hold any necessary hearings between Easter and the end of May.

In response to questions from the media, he later added that it is still too early in the proceedings to say if the hearings will be broadcast publicly as Premier Andrew Fahie recently requested.

After the hearings, he plans to write and deliver his report by the July deadline, focusing on “matters of real substance and importance to the present and future well-being of the islands,” he explained.

The investigation’s remit spans “recent years,” Sir Gary said, but he added that he is not limited to probing a specific timeframe.

The cost of the inquiry is fully covered by the UK government, according to the commission website.

In the Turks and Caicos inquiry, the lead commissioner released an interim report in March 2009 before releasing a redacted final report four months later.

Sir Gary said he could consider a similar move given the breadth of this investigation, and he would ask for an extension of the terms of reference if needed.

He added that he hopes his recommendations are provided to the public after the report is delivered to the governor.

Mr. Jaspert said during the press conference that “values of integrity, honesty and respect run deep in BVI” and that the territory largely meets “high international standards.” He specifically celebrated the VI’s financial services regulations.

“The very fact that so many individuals, businesses and public officers have come out in support of the commission speaks volumes to this territory’s character and values,” he said.

Responding to concern about the potential negative effects of launching the investigation, he said many of the issues raised by leaders — like the Elmore Stoutt High School wall project and failed BVI Airways venture — have already been investigated publicly by VI institutions and are under investigation by police.

“I thought very carefully about the picture of concerns I was presented with, as well as the ability of our institutions to investigate and deal with those themselves,” he said. “In consultation with those, I made that decision.” Mr. Jaspert left the territory on Saturday, and former Bermuda Governor John Rankin is set to take office tomorrow.

Mr. Jaspert said Mr. Rankin, who has not granted interviews here yet, supports the decision to conduct the inquiry.

Hours after Governor Gus Jaspert announced a commission of inquiry on Jan. 18, Premier Andrew Fahie guardedly supported the plan, pledging his government’s cooperation as long as the probe is carried out transparently.

But in the succeeding days, he changed his tone, sharply criticising the UK for what he described as a colonial plot to tarnish the territory’s reputation and impede its progress toward independence.

“They want to get the international world’s support, [so] that if they have to try to suspend our Constitution they could say that they had to do it because we were corrupt,” Mr. Fahie said Saturday during a community meeting in Baughers Bay, adding, “So they fabricate lies to try to destroy our territory. I always heard as a little boy that they’re coming back for this place. Well, they’re back. We have to wake up and understand that they’re back.”

The United Kingdom suspended parts of the Turks and Caicos Islands’ constitution and took over day-to-day control of government for about three years starting in 2009 following a similar inquiry that reported evidence of widespread corruption in the TCI among elected leaders and public officers.

Mr. Fahie also announced last week that government had secured the services of Withers, an international law firm headquarted in London, and Sir Geoffrey Cox, a Queen’s counsel who formerly served as attorney general of England and Wales, to represent it throughout the inquiry.

He did not say how much the services would cost or why outside counsel is needed in addition to the territory’s attorney general, who also represents the government.

On Saturday, he also said the UK unfairly blamed the VI government for events leading to the record drug bust last November even though security falls under the responsibility of the governor.

“[The governor and police commissioner] want to use their failure and give it to the local government in the international media, and then tell us that they love us while trying to destroy our name for their failure,” he said.

Other government ministers took a similar tone in recent days, echoing Mr. Fahie’s criticism of the decision to launch the inquiry.

Natural Resources, Labour and Immigration Minister Vincent Wheatley suggested at the Saturday meeting that the inquiry is designed to thwart the VI government’s efforts to empower the people of the territory.

“That message was so well taken, so well received, that it got some people scared, and they said, ‘You people are going too far with this empowerment idea.’ So they’re trying their best to dissuade us,” Mr. Wheatley claimed.

He added that the people of the VI must be able to handle their own affairs at some point.

During a Jan. 20 meeting at The Stickett in Long Look, Deputy Premier Dr. Natalio “Sowande” Wheatley called on the community to “stay vigilant.” He said residents need to pay attention or their freedom would “be taken right from under you.”

“There are those that believe you should be back in slavery: economic slavery, political slavery and other forms of slavery,” he said.

Health and Social Development Minister Carvin Malone took to Facebook to call the Jan. 18 announcement of the inquiry a “global attack” on the territory, equating it to disasters including Hurricane Irma and the Sept. 11, 2001 terrorist attack on the Twin Towers in New York.

“The WORLD awaits the details of the terms and conditions of the [commission of inquiry] that was pre-empted with spectacular GLOBAL announcements designed to fill the room with smoke,” Mr. Malone wrote in a Jan. 20 post on his personal Facebook page. “These thoughts are personal and not official.”