Community reflects on passage of Irma

Amid rain and wind that lasted much of the week, leaders and other community members reflected on the fifth anniversary of Hurricane Irma, with a largely virtual remembrance of how …

END_OF_DOCUMENT_TOKEN_TO_BE_REPLACED 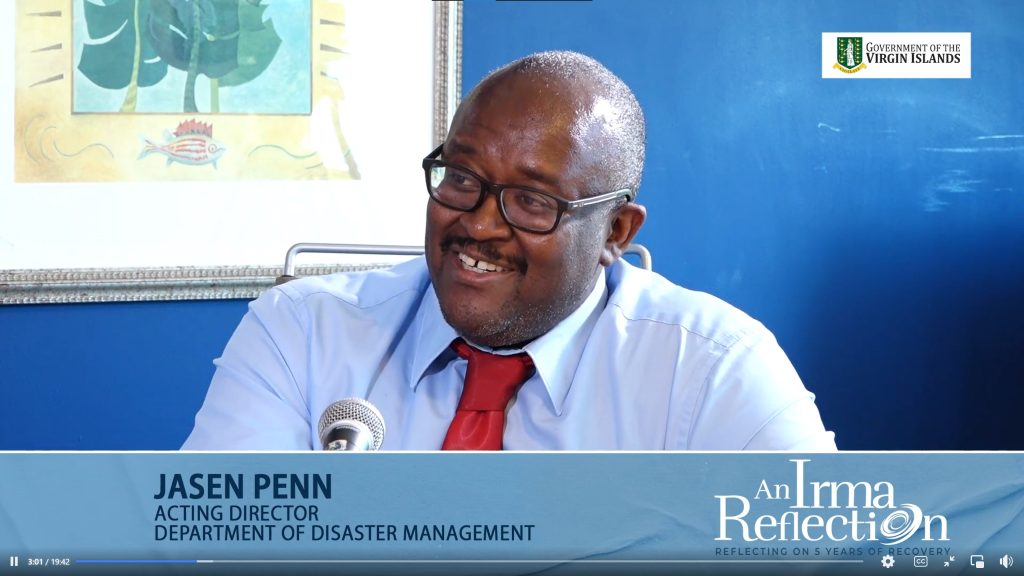 Amid rain and wind that lasted much of the week, leaders and other community members reflected on the fifth anniversary of Hurricane Irma, with a largely virtual remembrance of how the storm forever changed the Virgin Islands’ story.

The government hosted an online anniversary on Sept. 6, releasing stories, photos and quotes from officials and other residents throughout the day. Organisers also encouraged community members to share their personal thoughts with the hashtags #Irmalessons, #Irmareflection and #Irma2017taughtme.

“It was indeed one of the most harrowing experiences for the Virgin Islands and its people in recent times,” said Premier Dr. Natalio “Sowande” Wheatley. “On this day, natural disaster struck, devastating our homes, our public buildings, infrastructure, personal possessions, livestock, businesses, livelihoods, industries and our economy.”

He also encouraged residents to remember the four people who died during the storm and the others who died from Irma-related causes in the months afterward.

Governor John Rankin, who was the governor of Bermuda at the time and moved to the territory in early 2021, commended the community for its “herculean” efforts to recover.

“Recovering from that historic storm would have been challenging in any jurisdiction, but for an island nation with a comparatively small population, to have arrived where we are today is truly commendable,” he said. “At the same time, I am keenly aware that there is still work to do to recover from Hurricane Irma. Some people are still suffering from the trauma of the storm, and some are still rebuilding homes and livelihoods.”

The anniversary event also featured videos from business owners including Myett’s owner Kareem Rhymer. Even five years later, he said it’s still difficult to find the right words to describe what happened given how it affected not only the territory, but the Caribbean as a whole.

“We are trying to take the initiative so we can build back better,” he said.

Ms. Dabreo-Lettsome, who headed DDM at the time of Irma, said she still remembers the stunned looks of public officers who were monitoring radio reports of the storm as it rapidly approached.

“It was one of those very strange storms that came at us with full force,” she said.

The pair added that older generations’ stories of monstrous storms are becoming more relevant than ever, as demonstrated by the unpredictable hurricane.

Also this week, residents used social media to share photo albums of the damage across the islands, reflecting on what it took to survive and rebuild. They recalled the difficulty of trying to find family members and lost pets, of living in cars, of living without power, and other challenges.

But they also shared some of the positive moments that came out of the aftermath, particularly the relationships forged as people sought to support one another.

“Yes, we have a new roof with lots of hurricane clips and hurricane shutters,” resident Denise Carson wrote on Facebook. “And we hope we never have to use them.”

Members of government and the opposition also shared their thoughts in a special social media tribute.

Opposition Leader Julian Fraser wrote, “Those of us who have experienced the wrath of Hurricane Irma have been horrified to the point where it remains without question the most memorable moments of our lives. And while for the time being, there are still physical scars on the landscape as traces of its presence, there is no doubt that in time they will at some point go away. But the emotional and psychological damage will forever be a part of us.”

He added that there should “never be a next time” that the territory is unprepared for a storm of such magnitude.

“It was so easy to just give up and do nothing after witnessing the awesome destructive power of the hurricanes, but that was not the case,” he said.

Opposition member Carvin Malone reflected on the damage caused by both the 1924 and 2017 hurricanes, both of which caused multiple fatalities and widespread damage to homes.

“The resilience of our people continues to be tested, and yet again, we rise,” he wrote.