Community shows up big for 2022 Festival

Dancing in the streets by the hundreds for the first time in years, the Virgin Islands community showed up in force to celebrate being outside together for the 68th annual …

END_OF_DOCUMENT_TOKEN_TO_BE_REPLACED 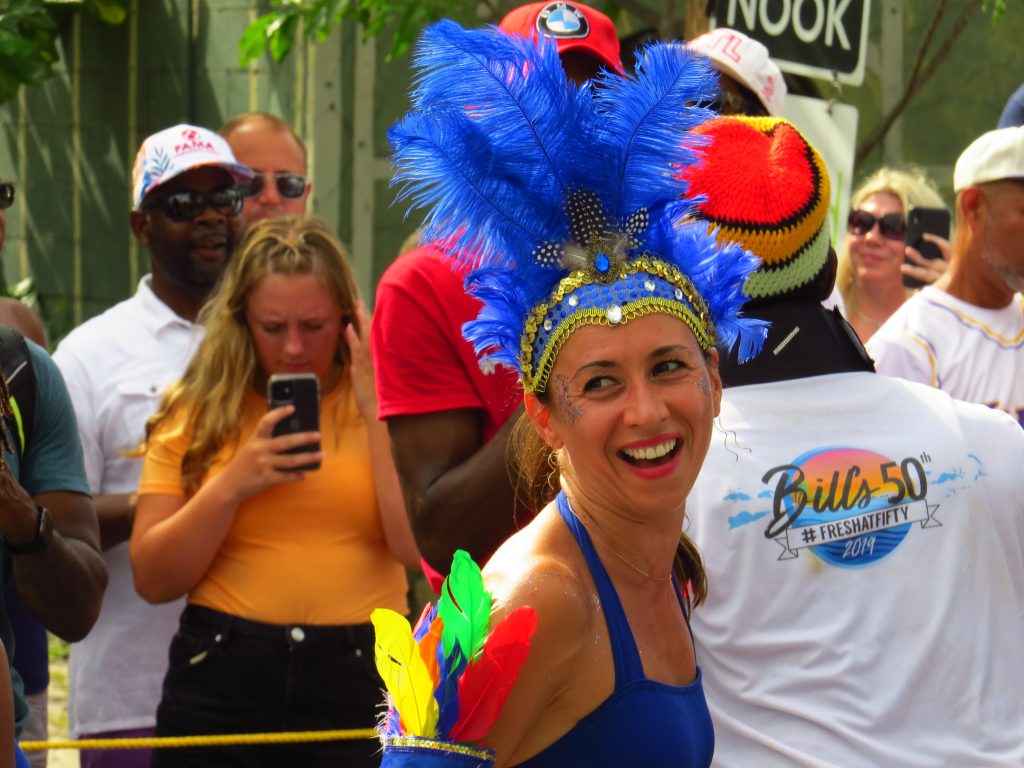 A mainstay of the festivities is always the August Monday Parade, which made its return this year to the August Emancipation Festival 2022. (Photo: DANA KAMPA)

Dancing in the streets by the hundreds for the first time in years, the Virgin Islands community showed up in force to celebrate being outside together for the 68th annual August Emancipation Festival.

The annual celebration highlighted the best of VI food, music, dancing, history, style and culture as community members let loose and recognised the importance of freedom.

The BVI Heritage Dancers, pageant royalty, public officials and festival grounds namesake Bernard “Yampie” Nibbs welcomed attendees on July 27 at the opening ceremony. The three pairs of dancers swirled onto the stage with their flowing yellow, green and red skirts, starting off a whirlwind of events this week that celebrated the history of the territory and what it means for the residents of today.

Gen Y Factor 2022 winner Yohance Smith started off a musical evening at the opening ceremony with the territorial song and national anthem, after which Deputy Premier Kye Rymer was one of the guests to offer his appreciation for the return of festival.

He acknowledged Mr. Nibbs’ contributions to the festivities over the past three decades as a booth owner, and parade marshall Hariette Rivera for her behind-the-scenes work on dearly loved pageants, parades and other festival events. He also recognised the hard work of festival organisers for putting together an “ambitious” event.

“We are celebrating 188 years since our emancipation and 68 years of celebrating our festival that was absent for the last two years after what took place with Covid,” he said, calling for a moment of silence in honour of those who died during the pandemic.

“We must never take for granted the sacrifices of our forefathers, and what they had to do to realise this dream to be a free people ruling our own destiny,” she said.

Governor John Rankin and Opposition Leader Julian Fraser also joined in the celebration of emancipation, with Mr. Fraser highlighting the importance of reparations.

Mr. Nibbs, who was honoured for his “outstanding contribution to the preservation of the Virgin Islands cultural heritage” according to his award, offered a few wise words to “sit back, relax, and enjoy the carnival” before the cutting of the pink ribbon strung across the stage to officially open the grounds.

Entertainers that evening united familiar songs of praise with dynamic dancing, appealing to a wide audience. They ended up drawing a crowd of hundreds by the end of the evening to sing along.

On July 28, festival-goers lit up Waterfront Drive with the traditional torchlight procession, offering a “hip hip hooray” in celebration of the “68 years of culture and 68 years of fun” as sung by the Zion Sounds Fungi Band. Adults in the crowd of several dozen people helped light the brightly burning torches of a new generation where the march started at Noel Lloyd Positive Action Movement Park.

Ms. De Castro and Mr. Rymer led the crowd as they all danced behind the truck blasting its music through town.

The procession carried that fire all the way to the festival grounds, where shortly afterward the Big People Party kicked off.

The festival grounds saw a bevy of musical talent from near and abroad in the following days, including the glow night on July 29, soca night and monarch competition on July 30, ultimate musical mix on July 31, local entertainment on Aug. 1 as crowds winded their way from the parade, and international reggae night on Aug. 2.

Each night had its own memory-making moments, including when Adam O. had audience members light up the festival grounds with their phone lights and when Ramon G. took the title of 2022 Soca Monarch.

Though attendees had fun swaying the bands at the festival grounds, the most energetic and exuberant dancing took place at the jouverts held in the early hours of Aug. 1 in Road Town and Aug. 3 on the East End.

Revellers danced through puddles, splatters of paint and dustings of flour at the Rise & Shine Tramp, with several trucks blasting tunes to keep them moving as sunrise gradually lit up the streets. Masked “bank robbers” wove their way through the packed crowds, and some paraders carried leafy fronds all the way to the stopping point at Cyril B. Romney Tortola Pier Park.

Partiers found the energy to come out in droves for the East End jouvert as well, ending with a refreshing leap into the water at the Beef Island bridge for some.

A mainstay of the festivities is always the August Monday Parade, which made its return this year.

The lineup started with a royal flourish as the newly crowned pageant royalty waved to the crowds on Waterfront Drive, including 2022 VI Prince Ryson Adams and Princess Lorrisa-Anya King. Kiandra Scatliffe took first runner-up at the competition held at H. Lavity Stoutt Community College on July 31.

Also leading the procession was Miss BVI 2022 Jareena Penn, who was the first runner up in the 2021 competition and was crowned as this year’s winner on July 24.

The spectacle featured colourful characters like the lion and lamb, the iconic moko jumbies towering above everyone, Ms. Rivera and Mr. Nibbs, and of course, bejewelled and feathered dancers that brought smiles to the faces of children enjoying the parade.

Earlier that morning, Reverend Dr. Melvin A. Turnbull led the annual emancipation service at the Sunday morning well, held on Aug. 1 following a solemn march from the Old Government House.

The festival also included a celebration of Caribbean cuisine with the Festival Food Fair on July 29 at Pier Park. Nearly 20 vendors offered food (including the famous Tortola peas soup), juices, candies, fresh produce, handmade hats, and more while visitors wandering around the park and enjoyed the sounds of the steel pan.

Closing out the festival season was a full day of family-friendly fun at the Carrot Bay Cultural Day on Aug. 5.

The festival also featured a day of water sports in the East End community.

Celebrations officially came to a close as partiers made their last lap on Aug. 6 with the “Drink the Booth Dry” night.