This article originally appeared in the Beacon’s Sept. 27th print edition.  During a candlelight vigil for World Alzheimer’s Day on Friday night, Jeanette Scatliffe-Boynes told the crowd personal stories about …

END_OF_DOCUMENT_TOKEN_TO_BE_REPLACED 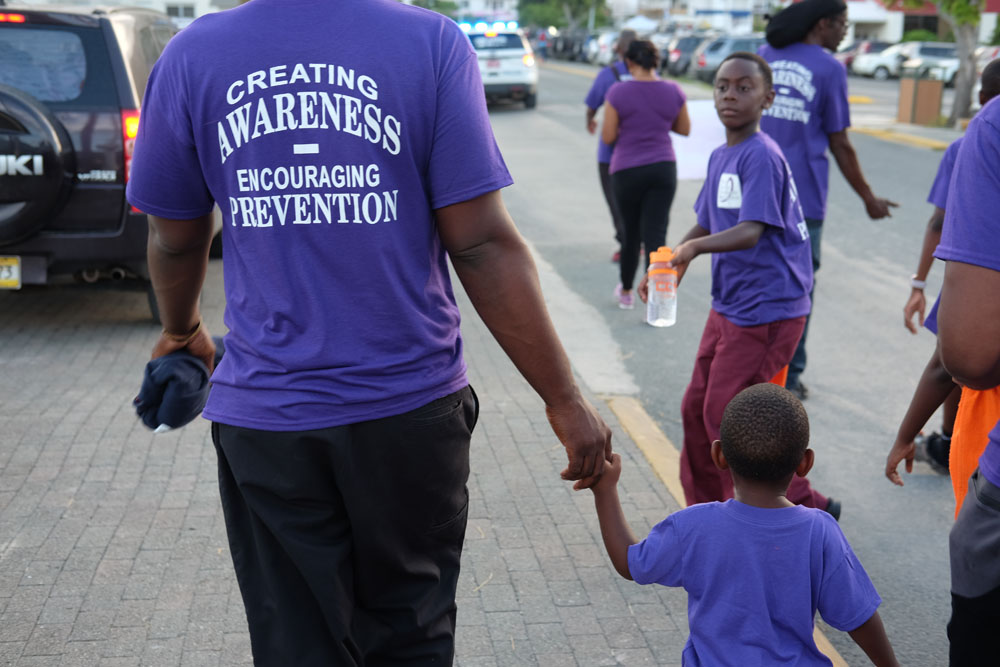 During a candlelight vigil for World Alzheimer’s Day on Friday night, Jeanette Scatliffe-Boynes told the crowd personal stories about her family’s experience with the disease.

Her mother has been suffering from Alzheimer’s for years, she said, but still has a sharp sense of humour and will sometimes joke with her husband, Ken.

Ms. Scatliffe-Boynes said these are some of the moments when she can tell her mom feels like herself, though they often don’t last long.

“When she’s not [mentally] with us and we come in, she closes her eyes. She doesn’t want to be bothered,” she said. “But it is a good feeling to know that we can be there for mom. It’s a long goodbye, yes, but we are thankful to have mom in our lives still, even when she doesn’t recognise us.”

About 40 people, including Governor Gus Jaspert, gathered at the Tortola Pier Park for the vigil and “memory walk” to Peebles Hospital hosted by the Virgin Islands Alzheimer’s Association and other partners. Children and adults alike wore purple shirts that read: “Creating awareness, encouraging prevention.”

“We want to say to you that you’re not alone,” Edna Williams, founding director of the association, said at the event. “You’re not alone in this venture. There are organisations, there are individuals, that are there for you.”

This September marks the seventh World Alzheimer’s Month, an international campaign started by the nonprofit Alzheimer’s Disease International to raise awareness about dementia and the stigma that can go along with it.

This time every year, the VI Alzheimer’s Association hosts a memory walk or vigil, media appearances and fundraising events.

“Of the things that we try to do, and we’ve been doing, is a lot of public speaking and presentations from [Vice President] Dr. June Samuel and myself,” Ms. Williams said. “We’ve been going into the community to different organisations, groups, churches — you name it — and presenting information on Alzheimer’s.”

And this year, it could be even more important to teach members of the community about Alzheimer’s and ways to reduce individual risk.

The stress of experiencing Hurricane Irma and the tumultuous aftermath could increase the number of cases of Alzheimer’s disease in the Virgin Islands, said the association’s president Ryan Geluk, though it won’t happen immediately.

“You wouldn’t see [the effect of Irma on the number of dementia cases] a year after; these things typically take time,” he said. “But if you were to follow this over the next five or six years, you will likely see an upswing or uptick in the number of cases, or at least above what you would normally have seen in the population.”

Dr. Samuel also pointed out that those who currently suffer from Alzheimer’s could have already been mentally impacted by the stress of the storm. Losing familiar landmarks, being forced out of your home or being separated from family members can all be extremely stressful or traumatic, she said.

“For the patients who are suffering from dementia or Alzheimer’s, [deterioration] could be accelerated. And I think we saw that there seemed to be a number of persons who decompensated in some way,” Dr. Samuel said. “Most likely it’s linked to the stress of all the disruption, because one of the things that’s important to Alzheimer’s patients is familiarity and routine and structure.”

The Alzheimer’s Association is currently working with the Social Development Department to collect data and keep statistics about the number of Alzheimer’s cases that exist locally. The two groups hope to create a database of residents who are suffering from the disease, Mr. Geluk said.

Many residents know someone who suffers from dementia, he said, and it’s important that they know the best ways to help their friends or family members and encourage prevention techniques.

“It’s not easy to watch [the impacts of dementia], especially with people who are extremely strong or are very strong-willed, and all of the sudden they can’t take care of themselves,” he said.

“And you see that progression over time, and that’s the most difficult part about Alzheimer’s and why we’re hoping to make people more aware.”