In examining the work of the Complaints Commissioner’s Office during a hearing focused largely on budgetary issues and the hurricane recovery, the Commission of Inquiry questioned current and former Complaints …

END_OF_DOCUMENT_TOKEN_TO_BE_REPLACED 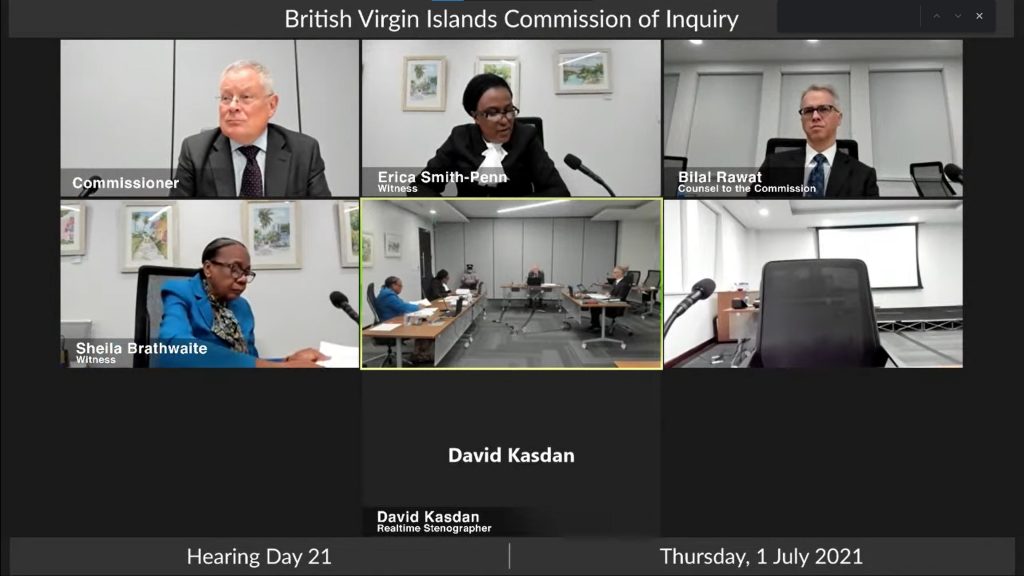 Past and present Complaints Commissioners Sheila Brathwaite and Erica Smith-Penn painted a grim image of a post-Irma office that is understaffed and responding to significantly fewer complaints than when Ms. Brathwaite first took office in 2015. (Screenshot: COI YOUTUBE)

Both leaders said the office needs more legislation-backed teeth to get information and enforce its recommendations.

Ms. Brathwaite assumed the role in 2015, succeeding founding commissioner Elton Georges, and Ms. Smith-Penn took over on Jan. 1 of this year.

Ms. Brathwaite began the hearing by reading out a position statement on good governance that she voluntarily submitted to the COI. In it, she complimented her predecessor for his work paving the way with ensuring the public service is responsive to complaints.

“He essentially laid the groundwork for the commission to be effective in its mandate,” Ms. Brathwaite said.

She also shared the “highs and lows” of her own tenure, explaining her frustration with public officers not responding to requests for information.

Because the Complaints Commissioner Act 2003 doesn’t grant adequate enforcement power to compel information, she said, she often had to resort to “encouragement mode” for getting answers.

“In my estimation, the commission has been relatively successful in being effective under the circumstances of budgetary and staffing constraints, the number of complaints dealt with, the processing of annual reports, the need for amendments to the [Complaints Commissioner Act 2003], independence of the office, and human rights issues,” she said. 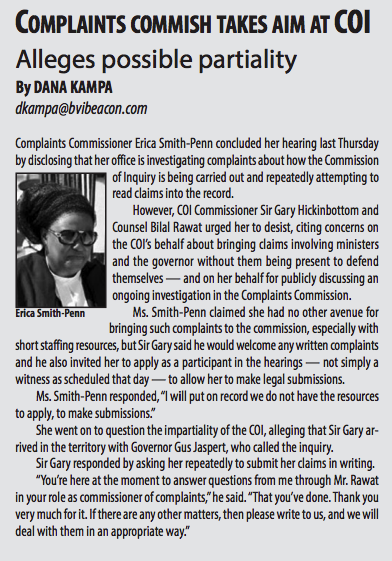 Ms. Brathwaite, who was appointed in 2015, responded, “I’m not sure what happened between 2015 and 2016. But I do think that by 2017, because of the hurricanes in the latter part of the year, we had no complaints. We literally didn’t have an office.”

She said this situation carried over into 2018, but she also attributed the decline to greater awareness by public officers of the importance of customer service.

Ms. Smith-Penn said the office also currently handles fewer official complaints because her staff is tasked with addressing matters not under her remit.

“A lot of times persons come in and just ask for advice, and it’s not recorded anywhere, and so we just indicate it as an inquiry, but it’s not really recorded,” Ms. Brathwaite said. “So people … are not aware of the effectiveness of the office. And as I indicated earlier, we do our own-motion investigations. They have yielded good results in the main.”

As an example of unrecorded inquiries, Ms. Smith-Penn recounted liaising with the director of human resources concerning an anonymous complaint about Covid-19 safety protocols not being followed.

Sir Gary noted that only 22 complaints were handled in the eight months prior to Hurricane Irma, and that complaints remained low year as of last year.

Ms. Brathwaite also offered examples of the types of issues the office investigates, including safety and hygiene issues at Her Majesty’s Prison.

Ms. Smith-Penn added that the number of prisoners held without sentencing remained consistently high during the past decade, at more than 30 percent of the prison population.

“Then we have police officers who in their private lives do things which are not on the up and up, so to speak,” Ms. Brathwaite continued. “In one particular instance, I met with the former [police] commissioner and he said he had no recourse because it was not a dereliction of duty.”

But she believed the complainant was denied the right to proper service from the police officer and advised him to seek legal aid.

She added that teachers have also often reached out about disability discrimination, though they were reluctant to instigate an investigation.

Ms. Brathwaite was critical of some factors she said affected the office’s effectiveness. Budget-driven travel restrictions made it difficult to adequately service complainants on the sister islands, and annual reports were often late in getting to the House of Assembly because of what she saw as an unnecessary step in bringing them to Cabinet.

But she did state that the office is effective in offering advice to community members on issues like land rights, though she said those interactions aren’t recorded in detail.

“The act itself has limited effectiveness because we are unable to demand that individuals, public officers, follow through on recommendations that we make,” she noted, calling for an amendment.

She said the public has been calling for legislation with more teeth since Mr. Georges’ time. She suggested several options, including measures giving the office more power to enforce its recommendations.

As Mr. Rawat summarised, the complaints commissioner submits its reports to relevant ministries, and if no appropriate action is taken, she writes a report to be laid in the House of Assembly.

However, both commissioners said submitting reports to the House is often fruitless given that there is no special committee to consider their recommendations.

But the office has dealt with more recent challenges as well.

One of the biggest was losing the staffer who served as office generalist — and who Ms. Brathwaite noted was the only one of the four staff members who speaks Spanish — because the office couldn’t secure additional funding to rebuild after the 2017 hurricanes.

Ms. Smith-Penn emphasised that the territory suffered heavy damage to government offices and experienced a large exodus of people in the aftermath of the 2017 hurricanes. She said rebuilding from such an event takes time and was stymied by the pandemic.

“We have not been able to rebound from that,” she said. “When you ask about the point of whether there has been very much improvement, I would just mention that we have gone out. We have devoted a considerable period of time from the first of January to date to going out and visiting public offices. We haven’t gotten to every single one, but we are going to do so.”

She said it is a human right for citizens to receive good quality public service, but also a right for officials to have satisfactory work conditions.

“I can say on the record that working conditions for public officers, for the most part, are not the best at the present because of the rebuilding phase that we are still in,” she said. “Considerable resources have had to be reapplied to fighting the Covid-19 pandemic to keep persons in the territory safe.”

Even now, she said, securing personal protective equipment for officers is a challenge.

Two recommendations made in the Complaints Commission’s 2017 report were to enact freedom of information legislation and to widen the commission’s role to include a Human Rights Commission with an adequate budget, Mr. Rawat read.

Her colleague added that though the commission can respond to such complaints currently, having a dedicated officer would provide a more formal avenue for reporting violations, ensuring better compliance with international conventions on human rights.

“Until that happens, we are quite happy to lead the charge,” Ms. Smith-Penn said.

Asked by Mr. Rawat if the commission would be more effective with a more autonomous budget system, Ms. Smith-Penn agreed.

Ms. Brathwaite said in one example the commission often paid much more for last-minute plane tickets and other items because of a prolonged process for funding approval.

“Public officers — I know I’ve had the problem — when we try our very best to control expenditure and say to persons that the public purse cannot afford something, we have been victimised,” Ms. Smith-Penn said.

Ms. Brathwaite said managing a budget, especially as money became tight in pandemic times, was difficult for the office because it was already down to the “bare bones” of core staff salaries, fees, property taxes and rent. Rent, she noted, doubled post-Irma.

She added that providing staff training is key to moving forward and making offices more effective.