Carvin Malone hopes that geography will translate into commercial opportunity in Pockwood Pond, bringing in shoppers to an underserved area. Mr. Malone, who formally dedicated the three-building R and R …

END_OF_DOCUMENT_TOKEN_TO_BE_REPLACED 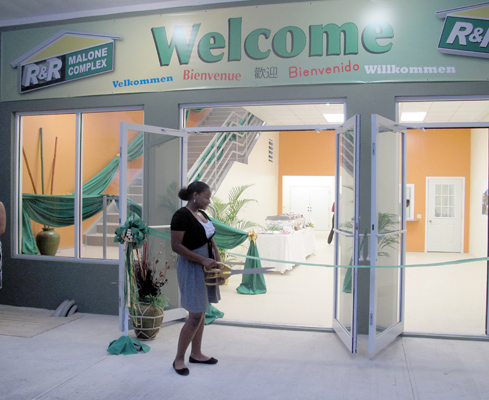 A girl cuts a ribbon to officially open the R and R Malone Complex at Pockwood Pond last Thursday. Three buildings of the retail, office and commercial complex have now been opened. (Photo: NGOVOU GYANG)

Carvin Malone hopes that geography will translate into commercial opportunity in Pockwood Pond, bringing in shoppers to an underserved area.

Mr. Malone, who formally dedicated the three-building R and R Malone Complex at a ceremony on Thursday, is hoping that the western end of Tortola could become a “shopping Mecca,” a vision furthered by his new 60,000-square-foot development.

By grouping merchants together, Mr. Malone is hoping to create a destination for shoppers.

“It was a major goal of ours. We felt there is a need to have a shopping centre in the form of a strip mall that provides ample parking space,” he said. “We felt that the merchants have the need to create synergy for their businesses.”

Several of the 11 tenants thus far committed to the complex — including the Department of Motor Vehicles, the Ali Galli Ladieswear store, and Kendall Auto Care — have already moved in. Others are still fitting out their spaces, Mr. Malone said.