When Jean Bonhotal and Mary Schwarz of the Cornell University Waste Management Institute began lecturing about compost on a recent Monday morning at Francis Lettsome Primary School in East End, …

END_OF_DOCUMENT_TOKEN_TO_BE_REPLACED 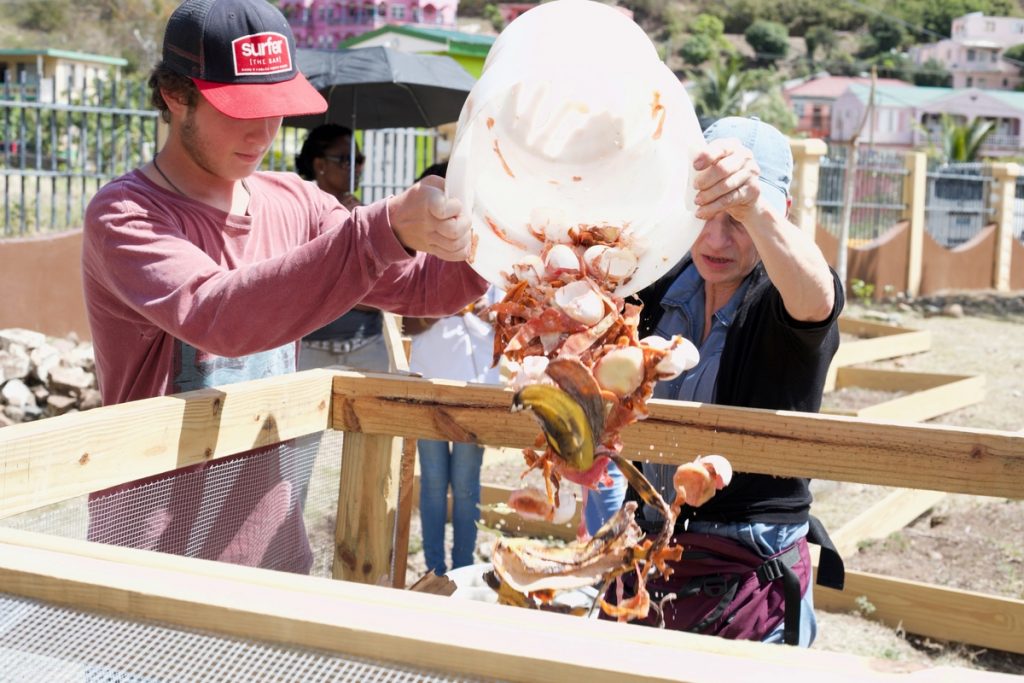 When Jean Bonhotal and Mary Schwarz of the Cornell University Waste Management Institute began lecturing about compost on a recent Monday morning at Francis Lettsome Primary School in East End, Iain Smith pulled out a pad and started making notes.

“Today I learned different uses of compost, the effects of lack of nutrients in soil to the environment, as well as the structure of compost and different methods of composting,” he said. “I also learned how to put it into play.”

These tips were among the lessons that residents took from a lecture series carried out on Tortola, Virgin Gorda and Jost Van Dyke in conjunction with Green VI, the Department of Waste Management and the Agriculture Department.

Ms. Issacs said she learned about the proper chemical balance for compost.

“You cannot have too much nitrogen or carbon or else it wouldn’t be good,” she noted.

Ms. Freeman added that composting saves money, reduces waste and improves soil quality — all useful goals for the newly established St. George’s club, which has dubbed itself “Passion for Earth.”

“I think our club has found our first project to do in our school, along with a good way to help the environment,” she said. “We got good information that we didn’t know before and it could really benefit our club in the future.”

Ms. Joseph, the biology teacher, said her students have been studying ecology and recycling and proposed the idea of starting the club. They also decided to push to make St. George’s a “green school,” and developed a logo and a motto.

“We got invited to this by Sarah Penney of Green VI, and as part of an environmental club we want to go and have something for the school that can be useful, because we have the land in Palestina,” she pointed out. “Getting educated in composting is a good way to start. There’s a lot of food-products waste being produced at the school. We can do something and give back to the environment and at some point have a garden, which will be the starting point for that.”

Ms. Bonhotal said she and Ms. Schwarz wanted to stress the importance of soil, which has been destroyed in much of the world because plants have been removed and not replaced. She added that compost helps produce healthy soil.

As a demonstration, the facilitators filled a four-by-four-foot cage with multiple layers: dry banana leaves at the base, then waste food products like banana peel, ground coffee and eggshells. More banana leaves were added as if making a lasagna, and then more food waste was piled on before the mixture was topped off with more banana leaves.

“We do the lazy man’s compost method here, because it will be the easiest way for people to succeed here, or everywhere, because we don’t have a lot of extra time to do this,” Ms. Bonhotal noted. “What we do is we have a container, we put brown material like banana leaves on the bottom of the container and we make it into a nest that we can put wet material in — food waste, coffee grounds, and in this case we did put some sargassum in — because that can be used as part of the recipe to break down and make more compost. It’s actually better than fertiliser because it has microbes and they’re doing the work for us: the turning, degradation of the waste. They’re actually digesting the waste.”

The end result is a soil-like material that is rich with micronutrients.

“When it gets dry, if we have compost in that soil it will hold the moisture in that soil so that the plants would be able to use it,” she explained.

“If you want to take all of the soil and grow food for people to eat, you need to fix the soil first and make that soil have the properties that it had originally that we’ve taken away by using only fertiliser,” she said.