In October, Henry Creque’s company Creque’s Engineering Services partnered with three other firms to submit a bid to build a hybrid solar microgrid on Anegada — the first project of …

END_OF_DOCUMENT_TOKEN_TO_BE_REPLACED 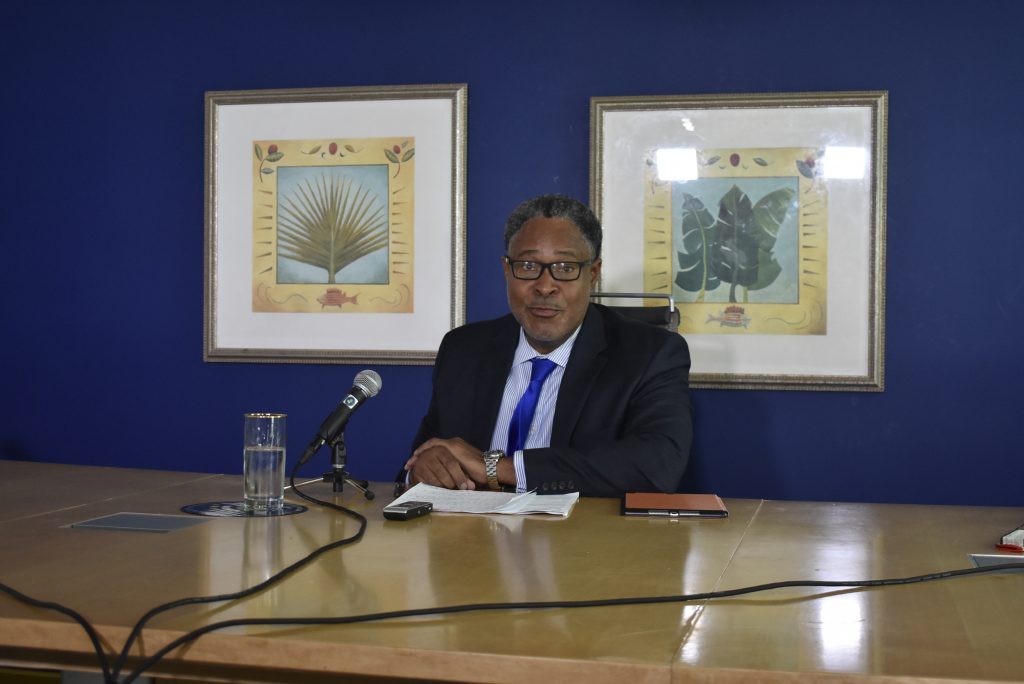 At a July 17 press conference announcing that a contract to build a two-megawatt solar and battery system on Aengada had been awarded to a United States firm, BVI Electricity Corporation General Manager Leroy Abraham said that no local companies submitted bids for the project. But at least two Virgin Islands companies had partnered with other firms that submitted bids. (Photo: JOEY WALDINGER)

In October, Henry Creque’s company Creque’s Engineering Services partnered with three other firms to submit a bid to build a hybrid solar microgrid on Anegada — the first project of its kind in the Virgin Islands.

Now, following a July 17 announcement that the contract had been awarded to a United States firm, Mr. Creque has questioned the bidding process and disputed statements that he said incorrectly implied that no VI companies threw their hats in the ring.

“Contrary to responses by the [BVI Electricity] Corporation’s general manager, Mr. Leroy Abraham, to a series of questions posed by the media at a recent press conference, we are very pleased to advise that our group of firms, which consisted of three BVI companies out of four, did indeed tender for this first-ever utility-scale solar project in the British Virgin Islands,” Mr. Creque claimed in a Sunday statement, adding, “We were therefore perplexed when Mr. Abraham indicated that there were no local companies that submitted proposals.”

Though the bid that included Mr. Creque’s company was submitted by the US-based firm Advanced Solar Products, the other partners included aTec, a VI solar provider; and BMR Energy, a New York-based clean energy firm under the Virgin Group umbrella.

The complaints from Mr. Creque — a former BVIEC deputy general manager who stepped down to run in last year’s election with the now-opposition National Democratic Party — refer to a July 17 press conference. During the session, Mr. Abraham was asked whether it was correct to say that no proposals were submitted by local companies, and he replied, “Yes, you are correct.”

In response to a follow-up question, he added, “There was some local interest in the project as it was advertised locally. Based on the scope and extent of the project, the project is outside the scope of local entities, so therein lies the reason why most of the participants, in regards to the tendering process, were large entities outside of the BVI.”

However, the project is expected to use as much local talent as possible, Mr. Abraham said in response to further questions.

Mr. Creque’s concerns over the bidding process, however, go beyond Mr. Abraham’s statements about local participation.

While Mr. Creque was still searching for a partner on the project, the BVIEC denied his request for the bid package, and he had to ask a friend to send him the materials, he said in a Monday interview.

“They just said that my company does not meet the requirements to receive a bid package,” he said.

However, the utility did not specify any minimum qualifications in the tender advertisement, Mr. Creque alleged in his statement.

During this early stage when companies were preparing their bid submissions, firms from abroad were trying to get a picture of the manpower available in the territory, Mr. Creque said.

But when they asked the BVIEC about the VI talent pool, they were advised that only “low-skilled labour and machinery should be sourced from local resources,” according to his statement.

Atec has been installing solar systems here for years, and several VI residents are certified by the North American Board of Certified Energy Practitioners to set up such systems, Mr. Creque added.

After the bids were opened, Mr. Creque and his partners learned that their proposal was “a mere 1.35 percent higher than the cheapest turnkey price tendered,” he wrote, adding, “We were … informed that our team was the most experienced and qualified out of four submitting bidders.” Power52, the Baltimore-based firm chosen for the job, had the cheapest overall price, at $4,687,944.72 for a deal that included designing the system, procuring its parts, and installing the finished product under one contract.

Though Mr. Creque said he has other concerns about the bidding process, he declined to elaborate.

Meanwhile, according to his statement, he and the rest of his team remain committed to the “pursuit to transform the energy sector in the Virgin Islands and to pursue accountability, fairness and transparency throughout this and future processes.”

Though they didn’t get the Anegada contract, they have submitted another proposal to the BVIEC to build a 10-megawatt solar grid on a patch of Tortola land, he wrote in his statement, though he declined to identify the proposed site.

Should the project come to fruition, it would churn out significantly more power than the Anegada grid, which is slated to deliver two megawatts of electricity, and would provide new jobs at a time when the tourism industry has been crippled by the coronavirus pandemic, Mr. Creque wrote.

“We are also pleased that should BVIEC accept our offer, the project will be accomplished without placing a burden on government’s or BVIEC’s purses,” he wrote.

Mr. Abraham did not respond to Mr. Creque’s allegations, but he directed this reporter to remarks that BVIEC Board of Directors Chairwoman Rosemarie Flax delivered at the July 17 press conference.

Ms. Flax, however, did not touch on most of the topics raised by Mr. Creque, including his claims that he was initially denied a bid package and that foreign firms were discouraged from soliciting local partners.