Public officers’ employment records and bank account numbers were among the information included on hundreds of documents strewn on the ground around a dumpster at the Ralph T. O’Neal Administration …

END_OF_DOCUMENT_TOKEN_TO_BE_REPLACED 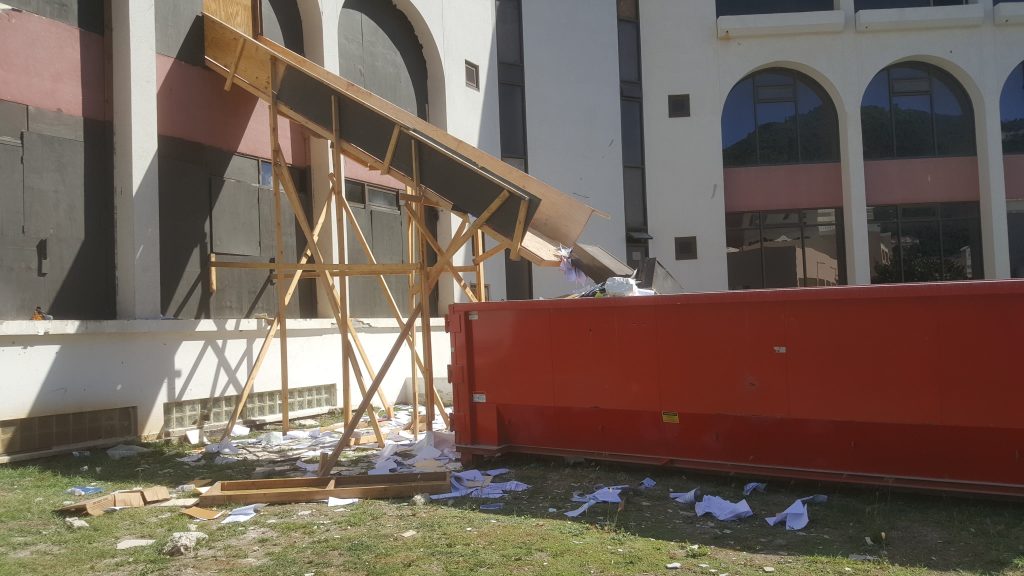 Hundreds of documents were strewn across the ground around a dumpster outside the Ralph T. O’Neal Administration Complex on the morning of Dec. 1. Some were stamped “confidential” and included personal details such as salary information, bank account numbers, birthdates and social security numbers. The documents were removed from the ground and put in the dumpster by about 11:30 a.m. (Photo: FREEMAN ROGERS)

Public officers’ employment records and bank account numbers were among the information included on hundreds of documents strewn on the ground around a dumpster at the Ralph T. O’Neal Administration Complex on the morning of Dec. 1.

The files, most of which originated from the Department of Human Resources, appeared to have fallen to the ground after being tossed in a wooden chute reaching from a second-floor window to the dumpster.

They dated as far back as the early 2000s, but most were employment records from 2013 through 2016. They contained wide-ranging information about several public officers, including salaries, bank account details, social security numbers, educational qualifications and increments.

By about 11:30 a.m. the same day, the documents had been cleaned up and put in the dumpster, which contained papers, furniture and other trash.

In response to a query from the Beacon, Chief Information Officer Desiree Smith said in a statement the same day that the spill was an “isolated instance that has since been resolved.”

The documents, she explained, were slated for burning at the Pockwood Pond incinerator because they had been identified as duplicates in an extensive review of files stored at the complex, which sustained major damage during Hurricane Irma.

“The process of disposing duplicate files [is] ongoing and will include the continued monitoring and supervision in an effective manner until completion ​in accordance and in keeping with the Records Management Policy,” Ms. Smith wrote.

• payroll authorisation forms stamped “confidential and restricted,” which each included information about a public officer such as a personal phone number, social security number, employee number, address, and one or more bank account numbers;

• a letter labelled “staff-in-confidence” that detailed a public officer’s maternity leave in 2016 and 2017;

• increment certificates for police and other public officers;

• 2013 and 2014 “performance planning and appraisal” reports for customs officers;

• a 2009 letter from the Virgin Islands Civil Service Association to then-Governor David Pearey about an odour attributed to a faulty sewage main near the Training Division and the Department of Youth Affairs and Sports;

• government’s 2011 sublease of space in the Betteto Frett Building on Wickhams Cay and subsequent complaints about the building addressed to Mr. Frett;

• a copy of a public officer’s social security card, among others.

In Ms. Smith’s statement, she also explained the file recovery process carried out at the complex after hurricanes Irma and Maria in 2017.

The storms, she wrote, caused extensive damage to active employee files in the Department of Human Resources’ third-floor office as well as a “large volume of closed files” in the building’s basement.

“In consultation with the Archives and Records Management Unit, an internal human resources team went through an extensive process of salvaging, cleaning, freezing, drying and disinfecting the majority of employee records that could be retained,” Ms. Smith wrote. “This was followed by a nearly two-year scanning project, which concluded in December 2019, with over 2,000 electronic files being created and confidentially captured in government’s electronic management system called Docova.”

In the past four months, the Ministry of Transportation, Works and Utilities, which now is responsible for restoring the complex, has worked with other ministries to designate records remaining at the building for archiving or disposal, according to Ms. Smith.

During October and November, about 100 boxes of records were salvaged, scanned and “safely relocated” to the new archives location overseen by the Archives and Records Management Unit, she explained.

The remaining files — which presumably include the ones on the ground on Tuesday — were “reviewed, classified as duplicates, and were slated for disposal, [which] entailed packing and disposing of the items at the incinerator,” Ms. Smith added.