Virgin Islands artists are getting new opportunities to share their work with the public, and the latest has come in the form of a local short film competition. In honour …

END_OF_DOCUMENT_TOKEN_TO_BE_REPLACED 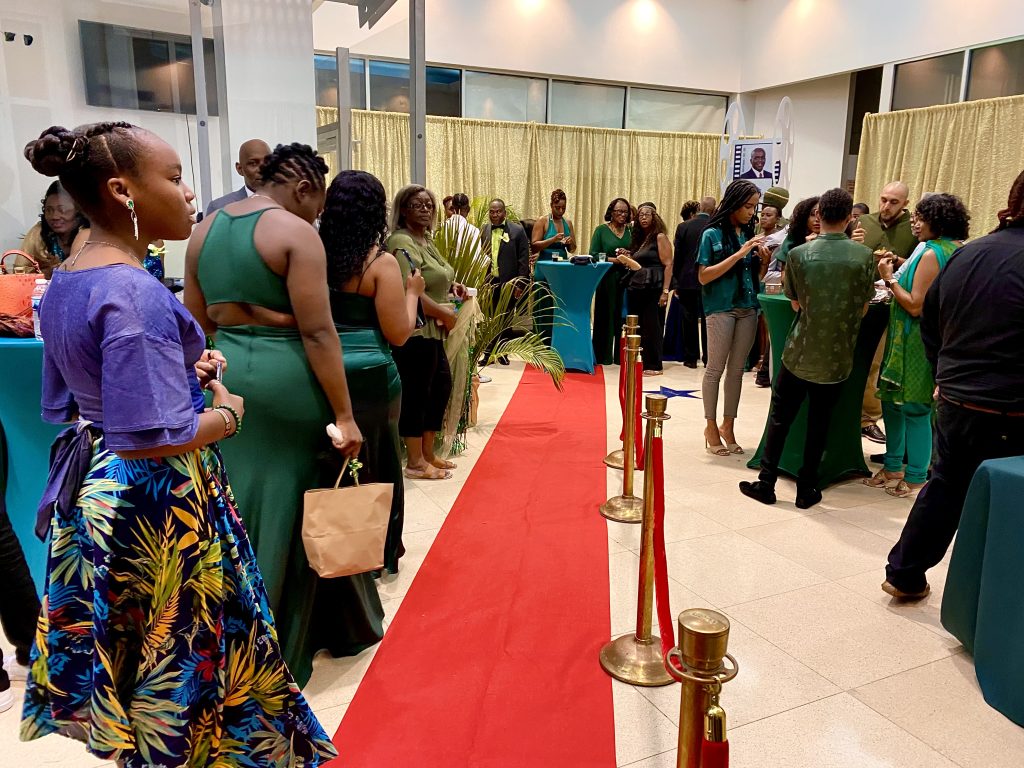 Decked out in green, attendees at the BVI Film Commission’s 30th anniversary film competition prepare to watch the projects created by five finalists on the big screen at U.P.’s Cineplex. (Photo: DANA KAMPA)

Virgin Islands artists are getting new opportunities to share their work with the public, and the latest has come in the form of a local short film competition.

In honour of the BVI Film Commission’s 30th anniversary, VI filmmakers had a chance to get creative for a short film showcase. Five finalists screened their projects at a redcarpet debut at U.P.’s Cineplex on Oct. 30, with Earl Hazel Jr. taking the $3,000 top prize for “The Filmmaker’s Dilemma.”

Though the filmmakers could choose any genre, they had to include specific elements: a cameo by a prominent VI figure; visuals of a historical site in the territory; a VIbranded alcohol; national songs and symbols; and an ending with the phrase “Seas the Moment,” among others.

“Coming into it, you want to win,” Mr. Hazel said. “But it overwhelmed me how much I won. I didn’t expect to capture some of the categories I did. But hearing people talk about how the film impacted them, I understood where the judges came from.”

The show began with Mr. Williams’ film “Love,” a comedy with a twist. Left feeling neglected after his guests are a no-show at his 30th birthday party, a forlorn man stumbles upon a wish-granting genie. While he says any other day he might wish for a billion dollars — or a new gaming system — all he wanted that day was for his friends to prioritise him.

Mr. Williams said it felt even better than he had imagined to see his film on the big screen, and despite operating on a tight schedule he was pleased with the final product. Though he said he hopes to advance his production elements in the future, he was glad to make the audience laugh with his comedy-thriller.

He was also impressed by the work of his fellow directors.

“They were really talented, and I learned a lot, to be honest,” Mr. Williams said.

Next up was Mr. Wheatley’s self-referential mockumentary, in which a world-famous influencer goes on a bender and disappears for six months, as reported by 284 Media newscaster Ronn Grant. Upon his return, the character reminisces about a simpler time of making skits with friends in the VI.

The mockumentary was packed with inside jokes that got attendees laughing, with one viewer commenting, “Comedy is where it’s at!”

Mr. Wheatley said he was proud of the project considering that he only had three days available to shoot. He added that he found the undertaking to be rewarding and fun while he pursues larger-scale projects including a feature-length film.

The evening took a heartwarming turn with Ms. Turnbull’s film “Add Essence.” She was the only finalist to submit an animated short that included music but no dialogue.

In the film, a young boy sets out to craft the perfect coconut tart in keeping with one of his most important New Year’s resolutions. Despite his many valiant attempts, the youngster just can’t quite get it right. However, he is struck by familial inspiration and makes one last try as the year draws to a close.

Ms. Turnbull, who completed the project solo rather than working with an animation team, said one of her biggest challenges was generating the right facial expressions and creating algorithms for details like the character’s hair movement.

She said she’s always had an interest in digital animation and has recently begun taking it more seriously.

Ms. Douglas and Mr. Peters told the story of a struggling dreamer with their film “The Big Break.” Their star experiences one of those days where nothing seems to go right, starting with the loss of her phone over the cliff at Bat Cave.

The directors said one of their most memorable days on set was shooting their opening scene, as it took some effort to reach the remote destination with all their equipment in tow while dodging rain and snakes.

“But it was really beautiful scenery and something we were excited to do,” Mr. Peters said.

Denia Vanterpool, one of the actresses in the film, said she got involved through H. Lavity Stoutt Community College’s drama club.

The showing concluded with Mr. Hazel’s artistic take on filmmaking challenges such as self-doubt and lack of access to fancy equipment. He utilised overlapping, echoing audio to give voice to that doubt, heard as he spoke directly to the camera. While on an adventure through thick foliage to discover hidden treasure, the narrator goes through a figurative journey attempting to find his inspiration.

But on his side was his oneman imaginary support team — again played by Mr. Hazel — offering “crisis management,” among other roles.

Ms. Turnbull was awarded for the best animated film and won the adoration of viewers, who voted her the fan favourite with boisterous applause. She also took second place in the overall competition.

This VI film competition was the first of its kind to be organised by the BVI Film Commission, and the organisation said it has other events planned for its anniversary. Premier Dr. Natalio “Sowande” Wheatley congratulated the creators and said he hopes to allocate additional funding for the commission as it grows.

The directors said they would love to see the film festival become an annual celebration.