Contracts worth a total of $3.5 million were signed with Virgin Islands firms over the past week to repair a school and two administration buildings on Virgin Gorda that were …

END_OF_DOCUMENT_TOKEN_TO_BE_REPLACED 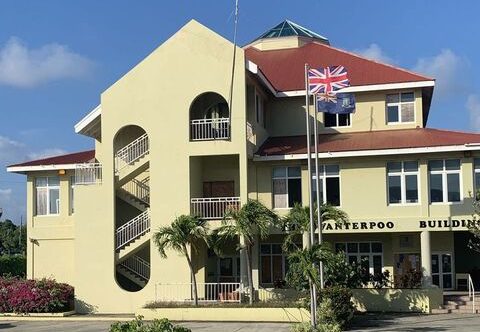 The Vanterpool Administration building, amongst others, is set to be refurbished. Photo:NICKLOUS KANHAI

Contracts worth a total of $3.5 million were signed with Virgin Islands firms over the past week to repair a school and two administration buildings on Virgin Gorda that were damaged by Hurricane Irma in 2017.

On Friday, the government, the Recovery and Development Agency, and Roy Garraway of Quality Construction Limited signed a contract totalling $1.7 million to completely rebuild two blocks of the Bregado Flax Educational Centre.

The project includes internal refurbishment and replacement of the roofs of Blocks Two and Four, ultimately providing 11 classrooms, a science laboratory, an internet technology laboratory, an art room, a library, bathrooms, and staff facilities, according to the RDA.

The works build on two completed phases that included repairs to Block One as well as temporary classrooms and staff facilities, according to government.

Also on Friday, a contract for the reconstruction of the Flax Administration Building was awarded to Metro Construction for $1.2 million.

The facility will combine e-governance with public services including the post, social security, inland revenue, labour, immigration, water and sewerage, environmental health, the magistracy, the Department of Motor Vehicles, the Civil Registry and Passport Office, and the district office, according to government.

This project includes the refurbishment and redevelopment of the two-storey building and will include mail and postal sorting facilities, a reading room and lecture space, a library, a police office, and office spaces for civil servants, according to the RDA.

All three contracts were awarded following tender processes carried out through the RDA, and all are funded by Caribbean Development Bank loan funding. Governor Gus Jaspert called the signings a “win-win-win” situation.

On Tuesday, Mr. Jaspert also promised that a contract for repairs to the Vanterpool Administration Building will be announced soon, “completing a suite of public administration offices” on the island.

Premier Andrew Fahie said he is “happy to see that the CDB loan funding is able to assist” with the work.

“Government is pleased to see the RDA pushing forward so that our infrastructure can be built and reengineered with the appropriate technology, reliable procurement system, operational capacity, inbound and outbound logistics, marketing and sales, and supporting services,” Mr. Fahie added.

He also applauded Anthony McMaster, acting CEO of the RDA, for stepping up to the leadership position after the March resignation of Paul Bayly.

Mr. McMaster announced that starting next week, the agency will host trainings that will “dissect the tender processes” to give more VI individuals and companies opportunities to bid and win contracts.

He also noted that this week, two more contracts would be signed, totalling $3 million.

Mr. Jaspert said, “I’m very conscious that for quite a while our dedicated public service on Virgin Gorda has been operating out of substandard conditions.”

He also noted that several projects are “in the pipeline” with funding from the CDB loan and government, stating, “This is the start over the next few weeks of ten extra projects coming forward, with each one injecting money into the economy.”

Deputy Premier Carvin Malone, the minister of health and social development, said the RDA has been doing good work in the midst of the coronavirus pandemic.

“The RDA has been quite keen in working around the clock because you cannot just have progress without a lot of work being done in the background,” he said.

Mr. Malone was one of several officials present at the sign- ing of the contracts at the RDA office in the Ritter House Friday morning. Donned in masks, officials maintained social distancing and invited media to the signing.

The BFEC was torn through by hurricanes Irma and Maria in September 2017. Unite BVI pledged $1 million to rebuild and Flow pledged $540,000 soon after, and ground was finally broken in November 2018.

The $414 million budget that the House of Assembly passed in December included $2.8 million to continue repairs to the centre, and in January, Natural Resources, Labour and Immigration Minister Vincent Wheatley, who as Ninth District representative represents Virgin Gorda, promised that construction on the school would “be tackled this year” and that it would be “completed for the next school year.”