On Monday, world leaders, business tycoons, journalists, celebrities and activists gathered in Glasgow, Scotland for the first day of an annual United Nations summit aimed at slashing the amount of …

END_OF_DOCUMENT_TOKEN_TO_BE_REPLACED 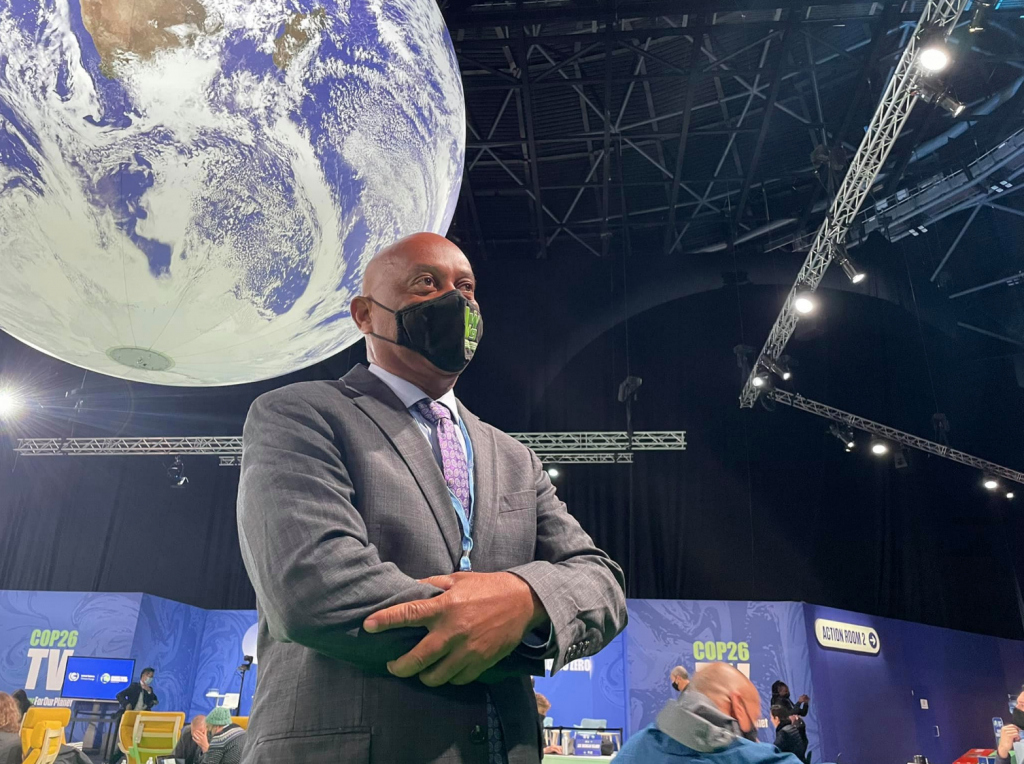 Natural Resources, Labour and Immigration Minister Vincent Wheatley is currently at the 26th Conference of the Parties, a United Nations climate change summit that started Monday in Glasgow, Scotland. He told the Beacon he is working on securing funds to help the Virgin Islands mitigate the impacts of climate change. (Photo: PROVIDED)

On Monday, world leaders, business tycoons, journalists, celebrities and activists gathered in Glasgow, Scotland for the first day of an annual United Nations summit aimed at slashing the amount of carbon humans emit into the atmosphere and heading off the worst effects of global warming.

Among the representatives at the 26th Conference of the Parties is Natural Resources, Labour and Immigration Minister Vincent Wheatley, who said he arrived in Glasgow with a specific goal: to secure financial commitments from the United Kingdom and other stakeholders in shoring up the Virgin Islands’ ability to mitigate those effects.

“We want them to say, ‘We will pledge this to you,”’ Mr. Wheatley told the Beacon on Tuesday. Following Brexit last year, European Union funding that would normally be assured to the VI for environmental mitigation is now off the table.

In meetings with UK and EU officials during the conference, Mr. Wheatley and other UK overseas territory representatives are trying to make sure these funds are again made available, he said.

But he added that he and his colleagues don’t yet know exactly how they will leverage these commitments, how much money they will request, or how exactly it would be used.

Such details, he explained, will hinge largely on the outcome of UK-funded “risk assessments,” which are designed to help determine the gravest climate-related threats and estimate the cost of recommended measures to mitigate their severity, Mr. Wheatley said.

Asked about the strategy that he and other OT representatives will use during their negotiations with EU and UK officials, he said, “That’s what we’re here to discuss with them.”

He added, “That’s why we’re going to sit down with them: to get them to … hear our cries.”

Mr. Wheatley and his colleagues from Anguilla, Bermuda, the Cayman Islands, Gibraltar, and the Turks and Caicos Islands were planning to start their meetings yesterday as the Beacon was going to print.

For many invested in the fight against climate change, COP26 is a critical juncture.

“Glasgow must be the kick-off of a decade of innovation and ambition to preserve our shared world,” United States President Joe Biden said on Monday.

According to the UN, if the world is to cut emissions enough to limit global warming to 1.5 degrees Celsius above pre-industrial levels — the goal established by the landmark 2015 Paris Agreement at COP 21 —countries must halve emissions over the next decade and reach net-zero emissions by 2050.

Whereas COP21 in Paris was aimed at delivering a global agreement to stop climate change, COP26 is aimed largely at ensuring that countries uphold their commitments under the Paris Agreement.

But many critics say that just meeting the pledges enshrined in the agreement — which most countries are failing to accomplish — may not be enough to divert climate catastrophe.

To hit the 1.5-degree mark, they say, countries must be more ambitious.

Ahead of COP 26, more than 50 countries, including EU members, have set updated net-zero emissions targets that could start to bend the emissions curve down, according to the International Energy Agency’s 2021 World Energy Outlook.

But absent a coordinated global push for electrification, energy efficiency, and a steep reduction of methane, which is emitted from gas and oil wells, these targets won’t be enough to drive emissions down to the levels required for the 1.5-degree goal, according to the IEA.

As with the Paris Agreement, there is an onus at Glasgow for developed countries to shoulder greater costs in recognition of the outsize role they have played in heating the planet.

One of the central COP26 goals outlined by the UN is to ensure that developed countries raise $100 billion each year to support developing countries.

But in a speech on Monday, Barbados Prime Minister Mia Amor Mottley said rich countries are not doing enough to protect the countries that will suffer most from unchecked climate change. In 2019, she said, climate finance to small island developing states declined by 25 percent. “Failure to provide the critical finance … is measured in lives and livelihoods in our communities,” Ms. Mottley added.

Though the VI faces existential threats from climate change, its ability to access such funding has been hamstrung since Cabinet revoked the Climate Change Trust Fund Board shortly after Premier Andrew Fahie’s government came to power in February 2019.

The independent body, which never started receiving its promised share of a $10-per-head tourist levy implemented in 2017, was designed specifically to facilitate access to climate change funding from here and abroad.

In a September Commission of Inquiry hearing, former board chairman Edward Childs said experts in the field told him that the 2015 legislation establishing the fund was the first of its kind in the Caribbean.

But after the board was disbanded, its progress came to a standstill while neighbouring countries moved forward with similar initiatives.

Mr. Fahie has said government plans to appoint new board members soon, but to date none have been announced.

Although there have been signs of progress so far at COP26 — more than 120 countries on Tuesday pledged to spend about $19.2 billion to reverse and end deforestation by 2030 — success is far from assured.

Together, the US, the EU, China and India account for more than half of global greenhouse gas emissions.

But neither the US nor the EU has passed legislation likely to meet their pledges, according to a Monday article in The NewYork Times.

And India on Monday pledged to reach net-zero carbon emissions by 2070, two decades after the target set by COP26 organisers, CNBC reported.

Mr. Wheatley acknowledged an urgency punctuating the conference, but he said there is a sense of optimism as well.