Local News > Cops to get financial and cybercrime training

Cops to get financial and cybercrime training

END_OF_DOCUMENT_TOKEN_TO_BE_REPLACED 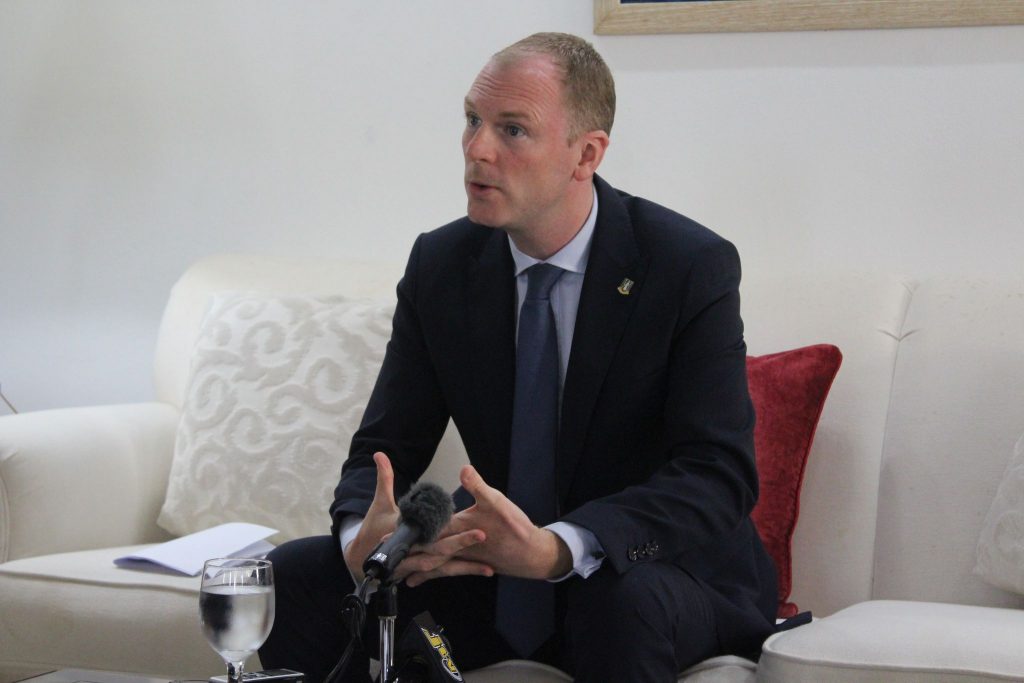 Last week, the governor explained that the protocols are designed to ensure financial prudence and that they don’t preclude the Virgin Islands from launching a stimulus package like other overseas territories bound by similar agreements. (Photo” ZARRIN TASNIM AHMED)

As part of the effort, the UK City of London Police will support and assess the Financial and Cybercrime Investigations Unit in preparation for a Caribbean Financial Action Task Force evaluation due next year, according to the Governor’s Office.

At the press conference, Mr. Jaspert also touched on the topics of governance, public service transformation, security, strengthening the judicial system, and improvements to disaster management throughout the territory.

“Ongoing — and this is an important part of my work and will always be on the top of my mind — is about disaster management activity and disaster preparedness,” he said.

He stressed the importance of being ready for a disaster at all times, not just when hurricane season comes at the beginning of June. As evidenced by the recent seismic activity in nearby areas, he said, disasters can happen at any moment.

“Don’t leave it till the end of May to start checking your families’, businesses’, and communities’ plans,” he said. “Think about are you ready to respond now?”

The governor shared that the territory will be reaccredited by the United States-based Emergency Management Accreditation Programme later this month.

In 2014 the Virgin Islands became the first Caribbean jurisdiction to achieve the accreditation, and it will remain the only one. Such accreditation helps the department’s grant applications and makes other resources more readily available, DDM officials have said.

“It’s important not to panic,” he said. “We need to be confident that we’re ready, follow advice, know what our plans are, know we’ve taken all the right measures.”

He also encouraged all residents to download the DDM app.

A reporter asked the governor about proposed amendments to the Computer Misuse and Cybercrime Act 2014, which has drawn criticism from free-speech advocates here and abroad.

“I’ve got the bill for assent,” he affirmed. “The bill is an important bill. It has some very important areas that have been flagged to me about speech and what is the right level of speech. Those are important issues. What is the right of the media to cause inconvenience? Is it right or wrong that journalists can cause inconvenience? Those are some of the issues that are being debated.”

The bill — sections of which are nearly identical to clauses in a proposed Grenada law that were deleted years ago amid international outcry from free-speech groups — will not take effect until the governor assents to it.

On Monday Mr. Jaspert said he and Premier Andrew Fahie are still corresponding about the bill, which was passed in the House of Assembly in October. He added that he hopes they reach a conclusion soon.

Last month, the premier doubled down on his support of the bill in its current form, claiming it went through the “most democratic process” and that the governor should assent to it.

When the governor was asked to clarify his January response to the recent resignation of Recovery and Development Agency CEO Paul Bayly, he echoed his previous statements and said he had nothing further to add.

“Paul Bayly was recruited to lead an organisation that had an ambitious agenda to our recovery. He’s come to the decision that it’s in a different position now and I sympathise with his decision on that,” he clarified.

Though he was asked about the status of the UK loan guarantee, which would allow the territory to borrow up to £300 million at low interest rates with the backing of the UK, he did not provide an answer.

Toward the end of the conference, Mr. Jaspert again stressed the importance of recovery and said that it needs to pick up pace this year.